As Protests Persist, Rouhani Warns Iran Will Respond To ‘Lawbreakers’

TEHRAN, Iran — Iranian President Hassan Rouhani on Monday said his country would respond to “rioters and lawbreakers,” a day after attempting to strike a conciliatory tone with protesters demonstrating against the regime across the country.

The comments, which also pointed a finger at the US, Israel and Saudi Arabia for fueling the unrest, came as Iran’s state broadcaster said 12 people had been killed in four days of unrest.

Six people were killed in the western town of Tuyserkan after shots were fired, state television reported, while a local lawmaker said two people had been shot dead in the southwestern town of Izeh.

Two others, included a teenage boy, were run down and killed by a fire engine stolen by protesters in the western town of Dorud, the state broadcaster said, bringing the total death toll in four days of protests to 12.

The authorities did not give details on who was responsible for the fatal shootings.

Rouhani played down the unrest, saying: “This is nothing.”

“Criticism and protest are an opportunity not a threat. The nation will themselves respond to the rioters and lawbreakers,” he said in a statement on the presidency’s website.

“Our nation will deal with this minority who chant slogans against the law and people’s wishes, and insult the sanctities and values of the revolution.”

Speaking to Iranian lawmakers, Rouhani said the protests were being pushed by Saudi Arabia, which was trying to destabilize the country along with the US and Israel.

“Our unity was a bullet (arrow) in their eyes and our progress and success in the world of politics and against the US and the Zionist regime was not bearable to them. Our success in the region was not bearable to them,” he said, according to the semi-official Fars news website. “(The Saudis) have blatantly said that we will create problems in Tehran.”

Responding to support for the protests by US President Donald Trump, Rouhani accused him of hypocrisy.

“The guy who is totally against the Iranian nation has no right to sympathize with Iranians,” he said, according to state-run media.

Shortly afterward, Trump tweeted a fresh message of support, blaming saying it was “TIME FOR CHANGE!”

Iran is failing at every level despite the terrible deal made with them by the Obama Administration. The great Iranian people have been repressed for many years. They are hungry for food & for freedom. Along with human rights, the wealth of Iran is being looted. TIME FOR CHANGE!

Videos spread on social media of demonstrations in several towns and cities including Kermanshah, Khorramabad and Shahinshahr.

A school for clergy and government buildings were torched in the northwestern town of Takestan and videos showed police using tear gas and water cannon to disperse a small protest in Tehran’s Enghelab Square on Sunday evening.

Rouhani addressed the nation first on Sunday night, breaking his silence over the biggest test for the regime since mass demonstrations in 2009.

“The people are absolutely free in expressing their criticisms and even protests,” he said in a message on the state broadcaster.

“But criticism is different to violence and destroying public property.”

The authorities have confirmed more than 400 arrests.

Verifying rumors and videos remained challenging due to travel restrictions and sporadic blocks on mobile internet and popular social media sites including Telegram and Instagram. 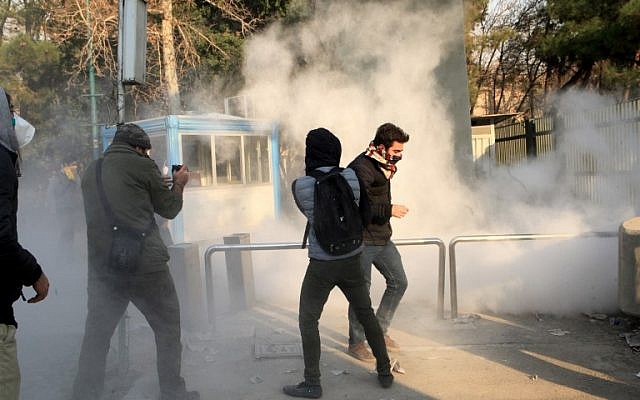 Iranian students run for cover from tear gas at the University of Tehran during a demonstration driven by anger over economic problems, in the capital Tehran on December 30, 2017. (AFP/STR)

The protests began as demonstrations against economic conditions in second city Mashhad on Thursday but quickly turned against the Islamic regime as a whole, with thousands marching in towns across Iran to chants of “Death to the dictator.”

Rouhani sought a conciliatory tone on Sunday, saying that government bodies “should provide space for legal criticism and protest” and calling for greater transparency and a more balanced media.

US President Donald Trump, a fierce critic of Tehran, said the “big protests” showed people “were getting wise as to how their money and wealth is being stolen and squandered on terrorism”.

He accused Iran of “numerous violations of human rights”, adding it “has now closed down the internet so that peaceful demonstrators cannot communicate. Not good!”

“This man who today in America wants to sympathize with our people has forgotten that a few months ago he called the nation of Iran terrorist.”

After initial silence, state media began showing some footage of the demonstrations on Sunday, focusing on young men attacking banks and vehicles, an attack on a town hall in Tehran, and images of a man burning the Iranian flag.

“Those who damage public property, disrupt order and break the law must be responsible for their behavior and pay the price,” Interior Minister Abdolrahman Rahmani Fazli said on Sunday.

There have been reminders of the continued support for the regime among conservative sections of society, with pro-regime students staging sizable counter-demonstrations at the University of Tehran over the weekend. 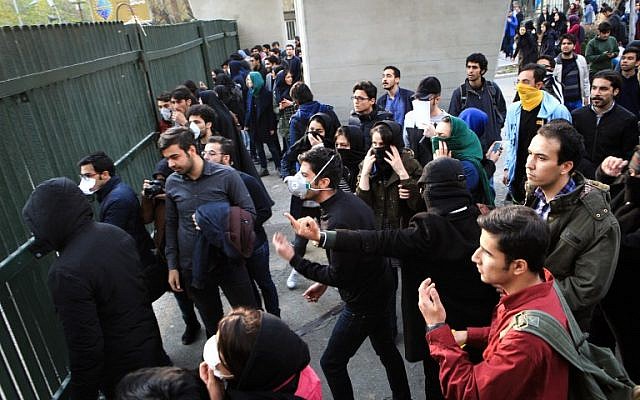 Iranian students protest at the University of Tehran during a demonstration driven by anger over economic problems, in the capital Tehran on December 30, 2017.
(AFP/ STR)

Rouhani came to power in 2013 promising to mend the economy and ease social tensions, but high living costs and a 12 percent unemployment rate have left many feeling that progress is too slow.

“We have no problem bigger than unemployment. Our economy needs an operation. We must all stand together,” Rouhani said on Monday.

Police have so far taken a relatively soft approach to the unrest.

The authorities have blamed external forces for fomenting violence, saying the majority of social media reports were emanating from regional rival Saudi Arabia or exile groups based in Europe.

Since the ruthless repression of the 2009 protests against a disputed presidential election that gave hardliner Mahmoud Ahmadinejad a second term, many middle-class Iranians have abandoned hope of securing change from the streets.

But low-level strikes and demonstrations have continued, with groups such as bus drivers, teachers and factory workers regularly protesting against unpaid wages and poor conditions.