Attorney General Hits Back Against ‘coup’ Allegations by Netanyahu, Backers

Attorney General Avichai Mandelblit on Monday expressed vociferous protest against accusations made by Prime Minister Benjamin Netanyahu and his loyalists, who said that law enforcement officials were engaging in a “witch hunt” after police recommended that the premier stand trial for bribery and other graft allegations.

Addressing lawmakers at the Knesset’s State Control Committee, Mandelblit rejected claims that he was intentionally taking his time in examining whether to indict Netanyahu in several corruption cases. Some have accused him of holding off so his decision to indict or drop the case against Netanyahu so it coincides with parliamentary elections, currently scheduled for November.

“There is no intention to delay anything,” he said during a heated meeting. “I strongly protest those remarks and insinuations, it’s completely untrue. I support the police and give them all my backing; I think that everything they did was done professionally.”

On Sunday, the police published their conclusion that there was enough evidence to bring Netanyahu to trial on charges of accepting bribes, fraud and breach of trust and fraudulently accepting benefits in the co-called Bezeq probe, also known as Case 4000.

Investigators concluded that the prime minister advanced regulatory decisions benefiting Shaul Elovitch, the controlling shareholder in Bezeq, the country’s largest telecommunications firm — despite opposition from the Communication Ministry’s career officials — in exchange for positive press coverage of him from Elovitch’s Walla news site. At the time, the prime minister was also serving as acting communications minister. 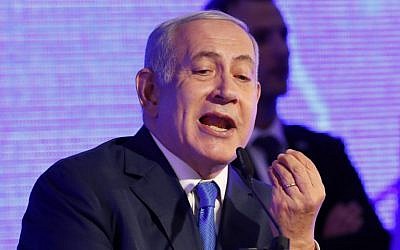 Prime Minister Benjamin Netanyahu delivers a speech before lighting a menorah at a candlelighting ceremony marking the start of Hanukkah in Ramat Gan on December 2, 2018. (Jack Guez/AFP)

It was the third case in which police have recommended bribery charges against the prime minister. They also recommended that his wife, Sara, stand trial in the case, along with the owner of the Bezeq telecom company, his wife, and others.

The police recommendations were handed down on the final day of Police Commissioner Roni Alsheich’s tenure, prompting accusations from Netanyahu and Likud officials that the timing of their publication was carefully planned.

“The witch hunt against us continues,” Netanyahu told a crowd of Likud supporters later that day in a blistering speech at the party’s official Hanukkah candle-lighting ceremony in Tel Aviv. The investigation, he claimed, was biased and “skewed from the start… A year ago, before even opening the investigations,” he charged of the police, “they decided what the outcome would be and leaked their conclusions.”

“This is persecution by the Israel Police; this is an actual coup,” coalition whip David Amsalem said Monday, joining a long list of Netanyahu loyalists in the Likud party who have slammed the handling of the criminal investigations into the prime minister. 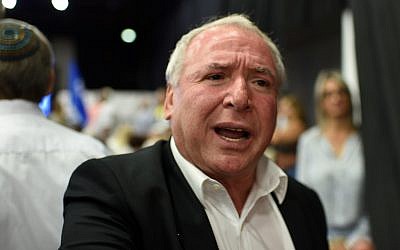 But Mandelblit firmly rejected those accusations, defending police, the legal system and his own office.

“The only thing we pursue is justice and the rule of law,” he added. “That is my duty in order to make the best decision, to use the help of the best people in the field. I am doing that as fast as possible. I will work professionally. I am a professional, not a politician, and I don’t intend to be thinking [in terms of] ‘yes elections, no elections.’”

However, Mandelblit stressed that his support of police did not mean he automatically backs the recommendations. 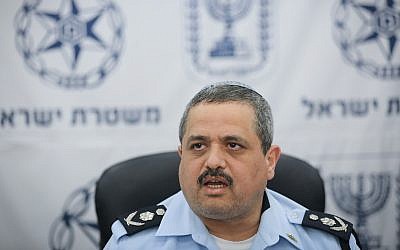 The recommendations in Case 4000 now go to the Attorney General’s Office, where they will first be reviewed by the state prosecutor before going to the attorney general.

Mandelblit, who will make the final decision on whether to indict the prime minister, intends to examine all three cases at the same time, which will be possible only after he receives the state attorney’s recommendations based on the final police reports. That process makes late 2019 the likely timing for any final word on whether Netanyahu will face trial.

The next Knesset elections are currently slated for November 2019, but may very well be held earlier.

Earlier this year, police recommended that Netanyahu be charged with bribery, fraud, and breach of trust in two other corruption cases, designated 1000 and 2000. The following month, Netanyahu said that law enforcement officials were being pressured to pursue criminal investigations against him. He has since railed at Alsheich, accusing him of leaking information to the press and of conducting a “witch hunt” against him and his family.

Share
Facebook
Twitter
WhatsApp
Telegram
Email
Previous articlePresident Buhari Replies Fake News, Says ‘I am not Jubril, I am the real Buhari’
Next articleAtiku Promises To Be ‘People-Friendly’ As Campaign Begins