An Israel-born genetics scholar from Britain published a study claiming that circumcision of boys increases the risk of cot death, but a prominent Dutch pediatrician has dismissed his findings as “nonsense.”

Eran Elhaik of the University of Sheffield published a study last month stating that the global perseverance of Sudden Infant Death Syndrome, or SIDS, and non-medical circumcision of very young boys “are strongly and significantly correlated.”

English-speaking countries practice significantly more non-medical circumcision of boys than other countries and “have significantly higher SIDS prevalence than non-Anglophones,” states the study, which was published last month on the website Biorxiv.

Hugo Heymans, one of the Netherlands’ foremost pediatricians who for decades had worked at the Amsterdam Academic Medical Center, dismissed Elhaik’s study as “flawed, biased and unreliable,” the Reformatorisch Dagblad daily reported earlier this week.

“Jewish parents have nothing to worry about,” said Heymans, who is himself Jewish.

The study is not Elhaik’s first controversy involving Jews. In 2016, he and a colleague published a study suggesting that today’s Ashkenazi Jews originate from converts to Judaism in what today is Turkey. Leading scholars of Ashkenazi Jewry dismissed that study as flawed and unsubstantiated. 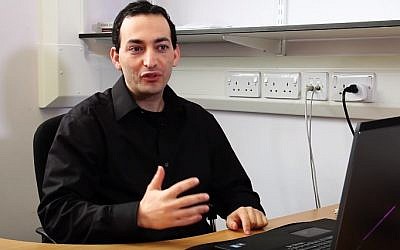 Elhaik’s PhD, earned at the University of Houston in 2009, is in molecular evolution.

The circumcision study’s results are based on data from 15 countries and over 40 US states during the years 1999-2016. Elhaik’s team looked at the relationships between SIDS and what the researchers said were two common causes of stress in very young infants: male neonatal circumcision and premature birth.

In the United States, circumcision accounted for some 14.2 percent of the prevalence of SIDS in males, the researchers wrote, adding that this is “reminiscent of the Jewish myth of Lilith, the killer of infant males.”

In a tweet, Elhaik asserted that the myth of Lilith — a female demon who is sometimes blamed for the death of infants — is based on Jews’ “unconscious” fear of SIDS associated with circumcision. Fear of SIDS “is why Jews don’t trim boys’ hairs until” age three, he tweeted, citing a Haredi Orthodox custom.  “They try to pass boys as girls to trick #Lilith because they knew that girls die less than boys.”

Fear of #SIDS (unconsciously associated with #circumcision & explained by #Lilith) is why Jews don’t trim boys’ hairs until 3 (#Upsherin or #Halake). They try to pass boys as girls to trick #Lilith because they knew that girls die less than boys https://t.co/ratQRj3Ve9

SIDS rates are significantly lower in US states where Hispanic people make up more than eight percent of the population, the researcher wrote. Circumcision is relatively rare in Latin America.

Heymans noted that Elhaik’s study does not take into account the potential impact of additional factors that may influence SIDS. “There are many social-economic differences between Hispanics and White Americans, as well as different eating habits” that are not factored in Elhaik’s study, Heymans said.

SIDS prevalence was the lowest in the Netherlands, with 0.06 deaths per 1,000 births, and highest in the United States, with 0.82 deaths. According to the World Health Organization, at least 61 percent of American circumcise their children. In the Netherlands, where only Muslims and Jews tend to perform the procedure, that figure is lower than five percent of the population.

Jews typically have boys circumcised when they are eight days old. Among Muslims, circumcision mostly occurs later in childhood but before the child enters adolescence. SIDS can occur only during the child’s first year of life.

In 2014, the US Centers for Disease Control and Prevention, or CDC, recommended circumcision as a means of reducing HIV contraction. In 2012, the American Academy of Pediatrics stated that the health benefits of newborn male circumcision outweigh the risks, but the benefits are not great enough to recommend universal newborn circumcision.

But the children’s ombudsmen of all Scandinavian countries said in 2014 that circumcision of boys violates their human rights needlessly because it does not provide proven medical benefits, according to several studies.

The custom of circumcision of boys is under attack in Western Europe. Left-wing activists cite children’s rights issues and right-wing critics say circumcision is a foreign import that should be limited.

Israel Discovers A Solution To Curb Growth Of Cancer Cells

ABOUT US
Corruption-Free Land is an online community of reporters and advocates who are dedicated to bringing commentaries, news reports, and features from around Nigeria and the world to you. This community is also dedicated to creating/reporting values that will guard against corruption of any form in the land, and bring about a Corruption-Free land.
FOLLOW US
Positive SSL
© Copyright 2018 - All Rights Reserved.
MORE STORIES