UNITED NATIONS, New York –The UN Security Council headed divided into an emergency meeting Friday to discuss the deadly wave of protests in Iran, as the Tehran regime sought to put the unrest to bed.

US Ambassador Nikki Haley — whose country sought the talks — has argued that the week of demonstrations — against the government and now for it — could escalate into full-blown conflict, drawing a comparison with Syria.

“The Iranian regime is now on notice: the world will be watching what you do,” Haley warned the Security Council meeting.

Russia has strongly criticized the US push for Iran to be discussed at the UN’s top body, arguing the protests pose no threat to international peace and security.

But Moscow stopped short of seeking to block the meeting.

A total of 21 people have died and hundreds have been arrested since December 28 as protests over economic woes turned against the regime as a whole, with attacks on government buildings and police stations. 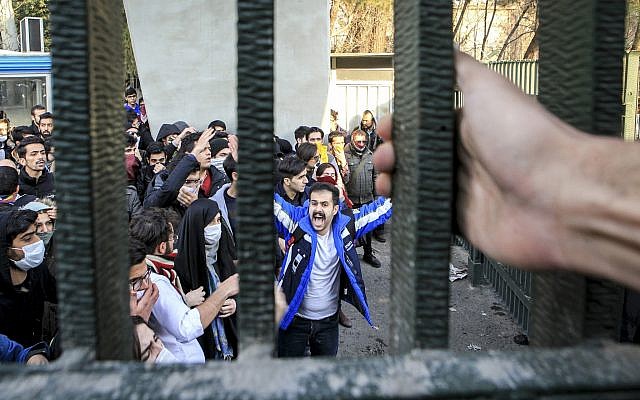 In this Dec. 30, 2017 file photo, taken by an individual not employed by the Associated Press and obtained by the AP outside Iran, university students attend an anti-government protest inside Tehran University, in Tehran, Iran. (AP)

Pro-regime rallies were held around Tehran Friday for the third day running with authorities seeking to put a lid on the violence.

Iranian officials have blamed a plot by the CIA, Israel and Saudi Arabia for the unrest that convulsed much of the country for five days — part of the increasing tensions playing out between Iran and its neighbors since President Donald Trump came to power.

The United States has meanwhile piled pressure on Iran, with Trump pledging to help Iranians “take back” their government.

“The Iranian people are rising up in over 79 locations throughout the country,” Haley told the council.

“It is a powerful exhibition of brave people who have become so fed up with their oppressive government that they are willing to risk their lives in protest.”

Iran’s UN Ambassador Gholamali Khoshroo wrote to the council accusing the United States of meddling in its internal affairs and urging countries to condemn Washington’s statements. 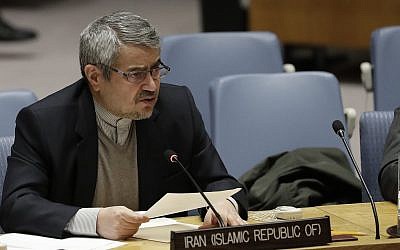 “The president and vice president of the United States, in their numerous absurd tweets, incited Iranians to engage in disruptive acts,” said Khoshroo in the letter also sent to UN Secretary-General Antonio Guterres.

That stance was echoed by Russia, which along with Turkey has jumped to Iran’s defense.

“The United States continues to interfere both openly and covertly in the internal affairs of other countries. They do so shamelessly,” Russia’s Deputy Foreign Minister Sergei Ryabkov said, quoted by Interfax news agency.

It remains difficult to gauge who was involved in the anti-government unrest.

President Hassan Rouhani’s supporters have blamed conservative rivals for stoking anger over economic issues, which quickly spiralled out of control.

The conservatives deny the accusations and say Rouhani must do more to help the poor.

Chief prosecutor Mohammad Jafar Montazeri blamed the unrest on a plot dating back four years by the United States, Israel and Saudi Arabia, while also claiming there were efforts to infiltrate the Islamic State group into the country.

Many officials have nonetheless recognized the genuine economic grievances of many Iranians, particularly a jobless rate at close to 30 percent for young people.

Iran’s economic growth rebounded to more than 12 percent last year after sanctions were lifted under a 2015 nuclear deal with world powers, but analysts say much of the windfall has come from renewed oil sales that generate few jobs. 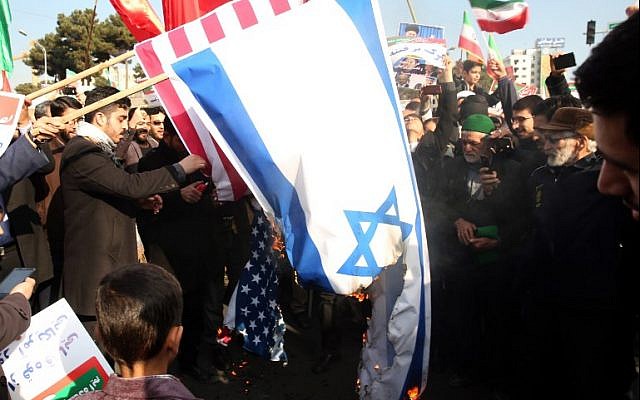 Iranian pro-government supporters burn the Israeli and US flags during a rally Mashhad in support of the regime after authorities declared the end of the recent protests, on January 4, 2018. (AFP Photo/Tasnim News/Nima Najafzadeh)

It was higher than a previous figure of 15,000 given by the head of the Revolutionary Guards, but still far below the hundreds of thousands that took to the streets during the last major protest movement in 2009.

Trump must decide next week whether to continue waiving nuclear-related sanctions suspended under the 2015 nuclear deal between Iran and world powers.

Under the deal, Trump must actively lift certain sanctions every few months and the next deadline falls on January 12.

Trump repeatedly tweeted his backing for the protesters during Iran’s unrest, at one point saying: “Such respect for the people of Iran as they try to take back their corrupt government”.

That was rebuffed by marchers on Friday.

“Mr Trump passed laws against Iranians such as the immigration ban, and he called Iranians ‘savages’… and suddenly he is sympathizing and supporting Iranians and it is ridiculous,” said Khalili, a government worker in Tehran.