CAIRO, Egypt — Ground, air and naval units from five Arab nations are arriving in Egypt to join their Egyptian counterparts for war games, Egypt’s military said, in the first sign that a military alliance proposed by Washington and dubbed the “Arab NATO” for its Middle East partners may be gaining traction.

A military statement late Wednesday said forces from Saudi Arabia, United Arab Emirates, Kuwait, Bahrain and Jordan will take part in the November 3-16 exercises codenamed “Arab Shield” and to be held in western Egypt. Lebanon and Morocco are taking part as observers.

Egypt has been holding separate drills with each of these five Arab nations in recent years, but “Arab Shield” will be the first time that all six will be simultaneously participating in war games.

The announcement came a little more than a month after US Secretary of State Mike Pompeo met in New York with the foreign ministers from the six nations participating in this month’s maneuvers plus those from Oman and Qatar to advance the idea of creating a Sunni alliance uniting America’s Middle East partners against Shiite and non-Arab Iran.

However, the Egyptian military statement made no link between the war games and the proposed alliance, which Egypt may be approaching with caution given its sectarian undertones.

Egypt has become heavily dependent on financial assistance and investments from Gulf heavyweights like Saudi Arabia and the UAE and that might in turn influence its decision on whether to join the proposed alliance. 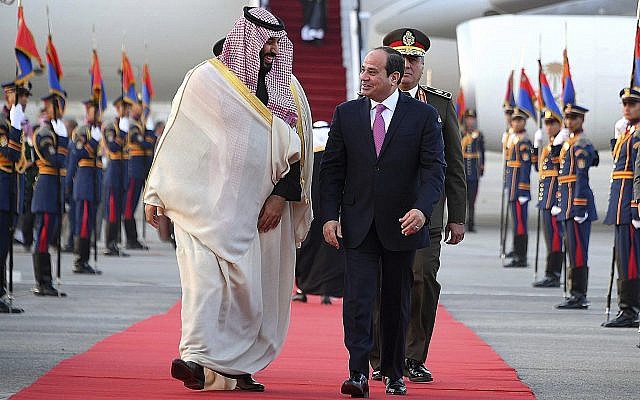 Egyptian President Abdel-Fattah el-Sissi, right, greets Saudi Crown Prince Mohammed bin Salman on his arrival to Cairo, Egypt, for a visit meant to deepen the alliance between two of the region’s powerhouses, on March 4, 2018. (Mohammed Samaha/MENA via AP)

The Arab NATO idea was previously seen as part of a wider US administration approach to the region, which included some form of normalized ties with Israel as part of an anti-Iran alliance. Egypt and Jordan are the only Arab countries to have official relationships with the Jewish state, though Israeli leaders have regularly boasted of growing, albeit covert, ties with potential regional allies.

While Arab states have traditionally insisted Israel first reach a peace deal with the Palestinians before open ties can be forged, the last week has seen several public signals of a growing rapprochement with Israel. That included a visit to Oman by Prime Minister Benjamin Netanyahu and separate trips to the UAE by two Israeli ministers. 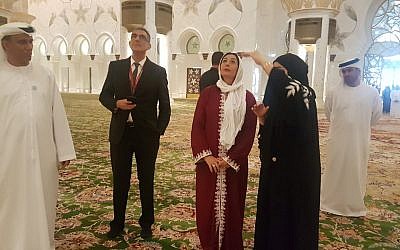 On Saturday, Oman’s Foreign Minister Yussef bin Alawi bin Abdullah told a security conference in Bahrain that Israel should be accepted in the region.

Trump envoy Jason Greenblatt, who will travel to the region next week, lauded the apparent growing ties Wednesday.

“In the last few days we have seen our regional partners Oman, Bahrain, and the UAE make statements and/or gestures signaling warmer ties with Israel,” Greenblatt wrote on Twitter. ” A more stable region leads to a stronger and more prosperous region. It is good for all.”

But a prominent Egyptian analyst on Thursday warned Cairo against joining a US-brokered Sunni alliance, framing its creation as part of an ongoing process to replace Israel with Iran as the Arabs’ chief enemy and emphasizing that differences between the Arabs and Iran can be politically settled.

“Israel is not a friend and this is a fact despite all attempts to ignore it,” wrote Abdullah el-Sinnawy in the independent al-Shorouk newspaper, alluding to growing public contacts between Israel and Gulf Arab nations that, unlike Egypt and Jordan, don’t have diplomatic relations with Israel.

“Where will the alliance’s front line (against Iran) be? The Arab NATO project is about military confrontation that will be fueled by Israeli participation and no one will be able to bear its grave consequences,” he wrote. 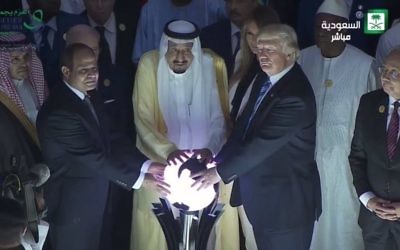 A screenshot of US President Donald Trump, Saudi King Salman and Egyptian President Abdel-Fatah al-Sissi touching a glowing globe to launch the opening of an anti-extremisn center in Riyadh on May 21, 2017. (Screenshot)

Qatar has reacted with skepticism to the proposed alliance, citing its yearlong dispute with Saudi Arabia, UAE, Bahrain and Egypt. The four nations have since June 2017 boycotted Qatar, demanding that the tiny but super wealthy nation limit its diplomatic ties with Iran, shut down the state-funded Al-Jazeera news network and sever ties to radical Islamic groups like the Muslim Brotherhood and Lebanon’s Hezbollah. Qatar denies supporting Islamist groups.

Oman is highly unlikely to join the alliance, given its close relations with Iran and its traditional role as a mediator in regional or international conflicts involving Tehran.

The US proposed alliance follows the derailment three years ago of efforts to create a joint Arab force agreed on at a March 2015 Arab summit in Egypt. That force was to be led by an Egyptian and headquartered in Saudi Arabia. But a meeting of military chiefs of staff that was to iron out details of the force was canceled in the last minute in August 2015 and another one was never scheduled.

Last year, Saudi Arabia announced the creation of an Islamic military alliance to fight terrorism. Defense chiefs from some 40 Muslim majority nations gathered for the alliance’s inaugural meeting in Riyadh a year ago, but little has been heard of the grouping since.

Egypt is a member of a Saudi-led, US-backed coalition that has been fighting Shiite rebels in Yemen since 2015, but its role in the conflict is known to be limited to reconnaissance and the deployment of warships off Yemen’s Red Sea coastline to secure shipping lanes. 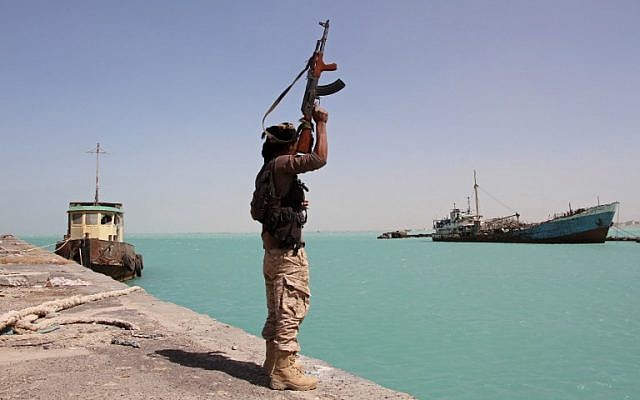 In this file photo taken on February 8, 2017, a member of the pro-government forces raises his weapon in the port of the western Yemeni coastal town of Mokha as the Saudi-backed troops advance in a bid to try to drive the Shiite Houthi rebels away from the Red Sea coast. (AFP Photo/Saleh al-Obeidi)

However, Egypt’s military is likely to be a key partner in the proposed alliance.

The most populous Arab nation, Egypt under general-turned-president Abdel-Fattah el-Sissi has become one of the world’s top arms buyers. It has spent billions of dollars, mainly in Russia, France and Germany, to acquire fighter jets, submarines, troop carriers and helicopter gunships.

Its recent arms purchases are on top of some $1.3 billion worth of American arms it buys annually under a US military aid program in place since Egypt signed a 1979 peace treaty with Israel.