A diplomatic feud between Israel and Turkey over deadly clashes on the Gaza Strip border continued on Wednesday, with the Foreign Ministry inviting a senior Turkish envoy for a dressing down over the “humiliation” of the Israeli ambassador as he boarded a flight to Tel Aviv after being expelled from the country.

Ambassador Eitan Na’eh, who was ordered to leave Turkey temporarily, underwent a strict security screening that required him to take off his shoes. Turkish press was invited to film the spectacle, prompting Israel to respond in kind.

“The Turkish charge d’affairs in Tel Aviv was summoned for a dressing down,” the Foreign Ministry said in a statement, inviting Israeli journalists to film Umut Deniz’s entrance to the Foreign Ministry building in Jerusalem at 1 p.m. and stating the exact gate through which he would be entering.

Upon Deniz’s arrival at the Foreign Ministry in Jerusalem, a security guard inspected his passport and diplomatic documents and subjected him to a security screening.

“The background, among others, is inappropriate treatment to Israel’s ambassador Eitan Na’eh at the Istanbul airport by conducting a strict security screening with deliberate presence of Turkish press,” the ministry said.

“It was a real hazing,” an Israeli source was quoted as saying by public broadcaster Kan. “It is a deliberate humiliation of an Israeli ambassador in front of the cameras — invited specially by the Turkish government.”

The source added that Na’eh had also had his hands inspected for traces of explosives during the security check.

The exchange recalled an incident in 2010, when relations took a hit after Israel’s deputy foreign minister Danny Ayalon apparently attempted to publicly shame Turkey’s ambassador to Israel by seating him on a low chair and failing to display a Turkish flag in the room during a meeting in which he rebuked the envoy for an anti-Israel TV series screened in Turkey. 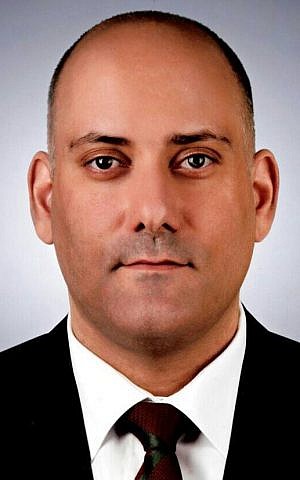 Foreign Ministry Head of Protocol Meron Reuben told Türkoğlu that he was “requested to return to his country for consultation for a certain period of time,” ministry spokesperson Emmanuel Nahshon said.

Jerusalem’s language mirrored that used by Turkey in requesting that Ambassador Na’eh temporarily leave the country in protest after dozens of Palestinians were killed during Hamas-organized confrontations with Israeli security forces on the Gaza border.

Turkey has also recalled its ambassador to the US for consultations on the situation.

The IDF said Tuesday that at least 24 of the dead were members of terror groups Hamas and Islamic Jihad. Israel claims that Hamas is spurring the violence and using it for cover for attacks. 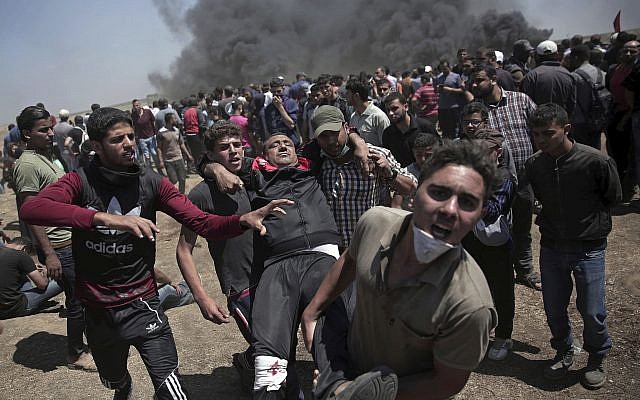 Palestinians carry an injured man who was shot by Israeli troops during a deadly protest at the Gaza Strip’s border with Israel, east of Khan Younis, on May 14, 2018. (AP Photo/Khalil Hamra)

Ankara reacted with fury to the clashes, which came on the same day the United States formally moved its embassy in Israel from Tel Aviv to Jerusalem in defiance of international criticism.

Slamming the Israeli response, Erdoğan said Monday that Israel is “a terror state” that has committed “a genocide.” Netanyahu hit back a day later, saying that as a prime supporter of Hamas, the Turkish leader was himself involved in “terrorism and slaughter.”

“A man who sends thousands of Turkish soldiers to maintain the occupation of Northern Cyprus and invades Syria will preach to us as we defend ourselves from infiltration attempt by Hamas,” he added in an official statement. “A man whose hands are stained with the blood of countless Kurdish citizens in Turkey and Syria is the last to preach to us about military ethics.”

Erdoğan, in a rare post in English to his personal Twitter account, retorted that “Netanyahu is the PM of an apartheid state that has occupied a defenseless people’s lands for 60+ yrs in violation of UN resolutions. He has the blood of Palestinians on his hands and can’t cover up crimes by attacking Turkey”

The Turkish president added, “Want a lesson in humanity? Read the 10 commandments.”

The flareup between the two firebrand leaders was the latest in a string of altercations to threaten the already-shaky relations between the countries, which were reestablished only recently after being broken off for several years.

Turkey’s ambassador to Israel, Mekin Mustafa Kemal Okem, whom it recalled on Monday, only arrived in Tel Aviv in late 2016 after his post had been vacant for more than five years. 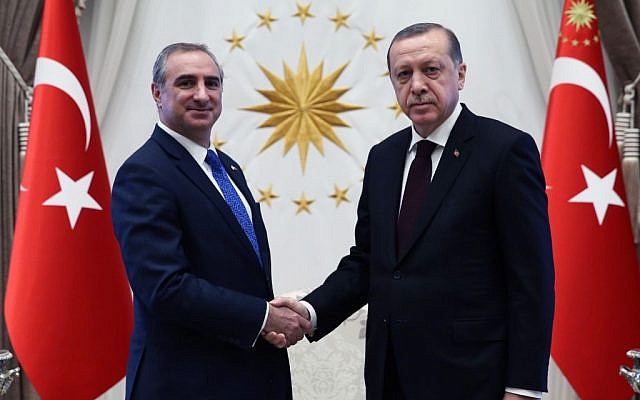 Na’eh, too, the Israeli ambassador, had been in his post only since December 2016 after a reconciliation deal earlier that year formally ended a five-year dispute over the storming of a Gaza-bound ship by Israeli commandos in which ten Turks were killed.

“Islamic countries should without fail review their relations with Israel,” he told his ruling party in parliament. “The Islamic world should move as one, with one voice, against this massacre.” 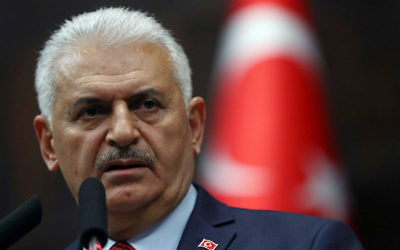 Turkey’s Prime Minister Binali Yildirim addresses members of parliament from his ruling AK Party (AKP) as he arrives for a meeting at the Turkish parliament on April 18, 2017, in Ankara. (ADEM ALTAN / AFP)

Yildirim added that Turkey had called an “extraordinary summit” of the Organisation of Islamic Cooperation (OIC), the world’s main pan-Islamic body, on Friday. Erdoğan currently holds the rotating chairmanship of the body.

It was not immediately clear what format the meeting would take or who might attend. Deputy Prime Minister Bekir Bozdag said in parliament that the summit would take place in Istanbul.

The Turkish president has positioned himself as a defender of the Palestinians and harshly criticized the US recognition of Jerusalem as Israel’s capital and its relocation of its embassy to the city, saying that the move was a violation of international law.