The Hamas terrorist organization on Saturday threatened retaliation against Israel for the killing in Malaysia of an electrical engineer it said was a commander of its military wing. Israeli reports said the dead man was an expert on attack drone and rocket systems.

Hamas’s leader Ismail Haniyeh accused Israel’s Mossad spy agency of killing Fadi Mohammad al-Batsh in Kuala Lumpur earlier in the day and vowed revenge: “Mossad is not away from this disgraceful, terrible crime. There will be an unsettled account between us and it,” Haniyeh said at a Gaza mourning tent for Batsh. “We cannot give up on the blood of our sons, youths and scholars.”

Batsh’s family in Gaza also accused Mossad of killing him: “We accuse the Mossad of being behind the assassination.” Israel had no official comment. 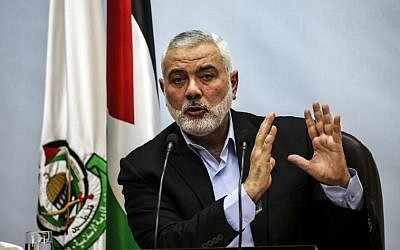 If Israel was behind the hit, Israel’s Channel 10 reported, then the Mossad was evidently focusing on preventing advanced technologies from reaching Hamas.

Malaysian police said Batsh, 35, was killed in a drive-by motorcycle shooting as he headed on foot to take part in dawn Muslim prayers on Saturday.

The Hamas terror group said Batsh was a “loyal” member and a “scientist of Palestine’s youth scholars.” It said he had made “important contributions” and participated in international forums in the field of energy.

Later Saturday the armed wing of Hamas opened a mourning house in Gaza for Batsh. A main banner at the entrance of the tent described al-Batsh as a member of the terror group’s military wing and “a commander.”

Ten masked fighters in camouflage uniforms stood in a line outside the tent in Jabaliya, the slain man’s hometown, to greet mourners. The ceremony is typical for senior Hamas commanders.

Hebrew media reports said he was deeply involved in Hamas’s efforts to improve the accuracy of its rockets and to develop drones. 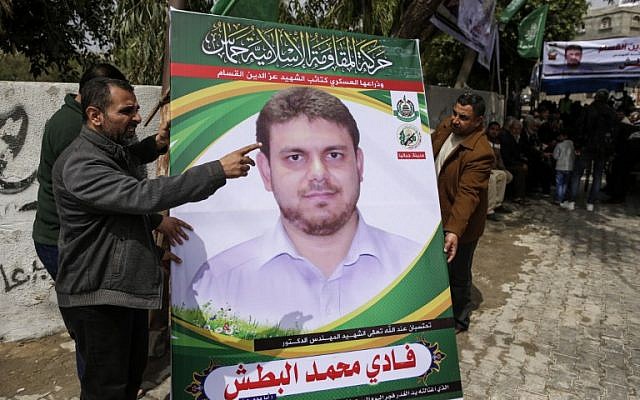 A picture taken on April 21, 2018 shows men holding up a poster portrait of 35-year-old Palestinian professor and Hamas member Fadi Mohammad al-Batsh who was killed in Malaysia, outside his family’s house in Jabaliya in the northern Gaza strip.
(AFP PHOTO / MAHMUD HAMS)

Hamas said earlier in the day that Batsh was “assassinated by the hand of treachery,” and called him a “martyr” — a word it usually uses for people killed by Israeli forces.

Kuala Lumpur police chief Datuk Seri Mazlan Lazim said one of two suspects on a high-powered motorcycle “fired 10 shots, four of which hit the lecturer in the head and body. He died on the spot.”

The police chief said footage from closed-circuit television cameras near the scene of the shooting showed two assailants waited for around 20 minutes in the area before attacking.

“We believe the lecturer was their target because two other individuals walked by the place earlier unharmed. We will view the recordings of all the CCTV in the area to identify the suspects and get the registration number of the motorcycle,” he said. 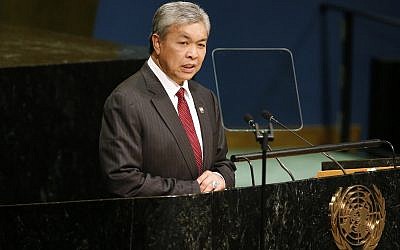 Malaysia’s deputy prime minister Ahmad Zahid Hamidi said the government was looking into the possibility of the involvement of “foreign agents” in his killing. He told local media that initial investigations showed the assailants were “white men” driving a powerful BMW 1100cc motorbike.

He said the suspects were believed to be Europeans with links to a foreign intelligence agency, Reuters reported, and that Batsh had “links with foreign intelligence and was active in pro-Palestinian non-governmental organizations, describing him as an expert in electrical engineering and rocket-building.”

Batsch may have been regarded as “a liability for a country that is an enemy of Palestine,” Zahid was quoted as saying.

Besides his Hamas affiliation, Batsh was a cousin of Khaled al-Batsh, a senior official in the Islamic Jihad terror group, who also accused the Mossad of the assassination, without providing evidence. 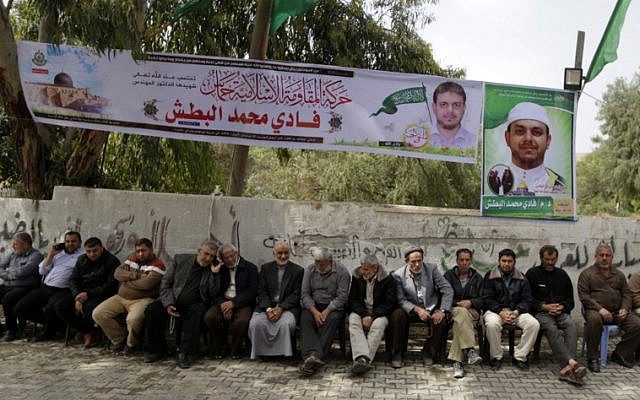 Palestinians gather in mourning outside the family home of 35-year-old professor and Hamas member Fadi Mohammad al-Batsh, who was killed early in the day in Malaysia, in Jabalia in the northern Gaza strip on April 21, 2018. (AFP PHOTO / MAHMUD HAMS)

Batsh specialized in electrical and electronic engineering and worked at a Malaysian university. He had lived there with his family for the past eight years and was an imam at a local mosque.

He received his Ph.D degree from the University of Malaya in 2015 and was a senior lecturer at the British Malaysian Institute. His official biography said his research interests included power converters, power quality, and renewable energy.

The Batsh family urged Malaysian authorities to investigate his murder and “arrest those responsible for killing him before they flee.” They also asked for the return of his body to his hometown of Jabalia in the Gaza Strip.

The Mossad has been accused in the past of eliminating those who supply Palestinian and Lebanese terror groups with advanced technology, as well as having assassinated Iranian nuclear scientists.

The most high-profile case was the death of Hassan Lakkis, who was the head of Hezbollah’s weapons research and development. He was shot and killed south of Beirut in 2013. Hezbollah leader Hassan Nasrallah blamed Israel, but Jerusalem denied any involvement.

In Dubai, in 2010, Mahmoud al-Mabhouh, a key Hamas missile purchaser and importer, was assassinated in his hotel room in a killing widely attributed to Mossad.

Hamas also accused Mossad of assassinating one of its drone experts — Mohamed Zouari — in Tunisia in 2016.