PARKLAND, Florida (AP) — About 50 uniformed officers marched into Marjory Stoneman Douglas High School early Wednesday, just one aspect of the heavy security as classes resumed for the first time since 17 students and teachers were killed by a troubled teenager with an AR-15, thrusting them into the center of the United States’ national gun debate.

The heavily armed police presence, designed to make the community feel secure, is also disturbing in itself, some students said.

“This is a picture of education in fear in this country. The NRA wants more people just like this, with that exact firearm to scare more people and sell more guns,” said David Hogg, who has become a leading voice in the students’ movement to control assault weapons. “I know one of those bullets could be shredding through me if I was misidentified as a school shooter,” Hogg added.

Grief counselors are on campus as well “to provide a lot of love, a lot of understanding” and help students “ease back” into their school routines, Broward Schools Superintendent Robert Runcie said. Officers with therapy dogs also stood outside. 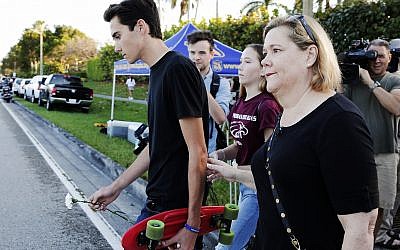 Volunteers passed out cookies and brownies to students. The students were also greeted by therapy animals including a donkey and two horses. One of the horses had “eagle pride” written on it.

Backpacks were not allowed.

Wednesday’s class schedule started with 4th period, so that students and teachers could return to the people they were with during the shooting. The freshman building where the massacre took place remains cordoned off.

Casey Sherman, a 17-year-old junior, thinks the schedule was a good idea so kids can “get it over with,” and not worry about it all day. Up until 11:30 p.m. working on preparations for the March 14 national school walkout against gun violence, she said she’s not afraid to be returning, “just nervous.”

“We did go through a tragedy,” said Sherman, who walked in holding hands with her boyfriend. “It was terrible but if you let it stop you … it’s not how you go down, it’s how you get back up.”

A long line of cars circled the school and dozens of television trucks and vehicles were camped out nearby as students, parents and staff were ushered through a security cordon, past a “Welcome Eagles” banner and a walkway lined with flowers, photographs and other memorials. Some were returning despite severe gun wounds, but even those who weren’t hit by bullets spoke of emotional trauma. 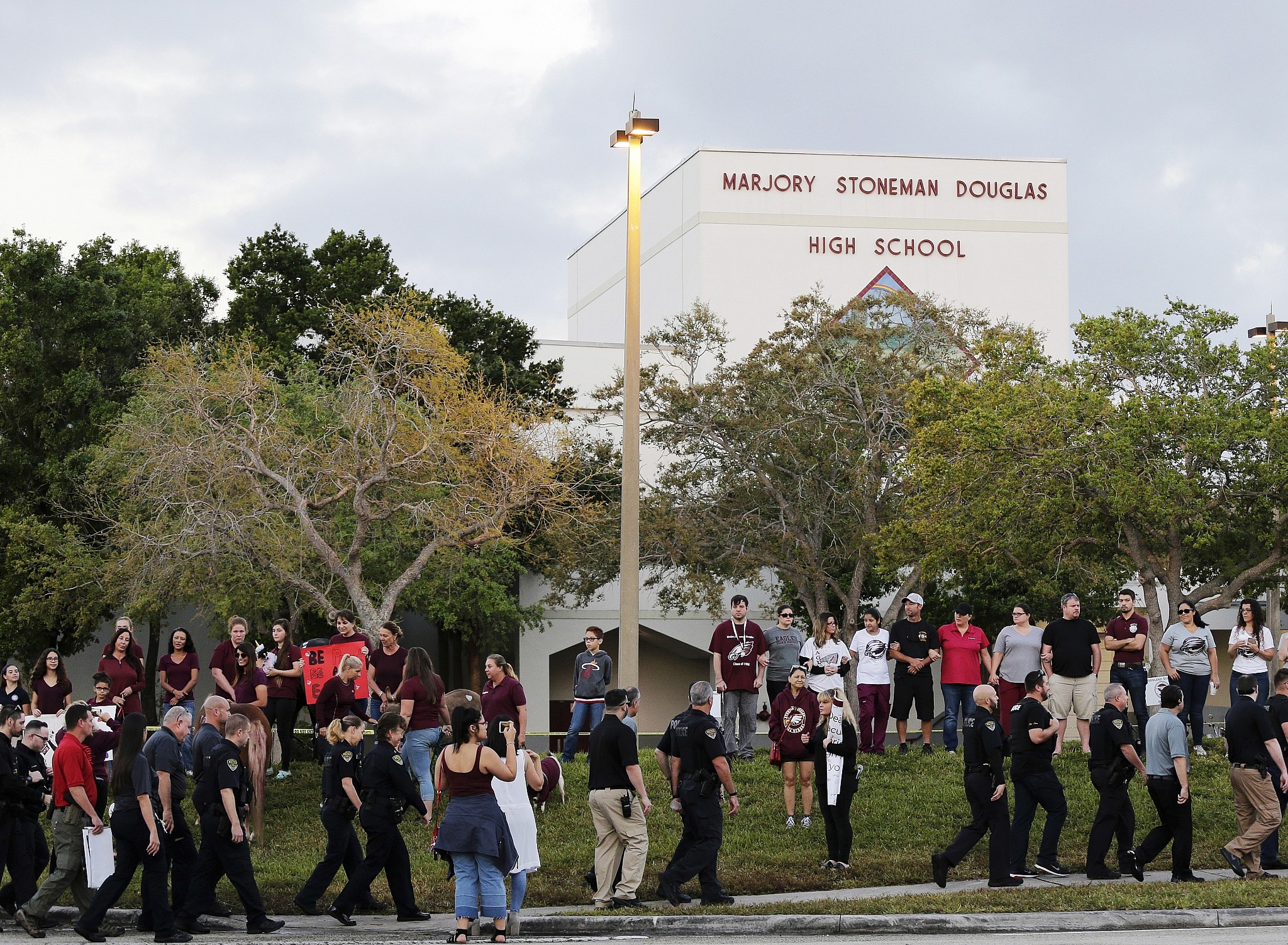 Alexis Grogan, a 15-year-old sophomore, planned to wear a Stoneman Douglas color — maroon — on the first day back to class Wednesday, plus sneakers that say “MSD Strong, be positive, be passionate, be proud to be an eagle” and “2/14/18” in honor of those who died.

She feels nervous, like it might be too soon to go on as usual without slain friends like Luke Hoyer, who sat two seats behind her in Spanish. Still, the support from her fellow students, and their fight to strengthen gun control laws have buoyed her spirits.

“I am so proud of how the kids at my school have been fighting because we all want change to happen and, as we see the progression, it really shows us that people do care and they do hear what we have to say,” Grogan said in a text message.

Meanwhile, Dick’s Sporting Goods announced it will immediately end sales of assault-style rifles in its stores and won’t sell guns to anyone under 21 years old. Dick’s Chairman and CEO Edward Stack said on ABC’s “Good Morning America” on Wednesday that after the Florida shooting, the company “felt it needed to do something.”

The victims’ relatives kept up the pressure in Florida’s capital Tuesday, with emotional testimony during a legislative hearing on a bill to raise the age limit to buy long guns from 18 to 21, and create a program allowing teachers to carry concealed weapons in their classrooms, if their school district allows it, they get law enforcement training and are deputized by the local sheriff’s office.

The Broward superintendent has spoken out firmly against the idea of arming teachers. Hogg also thinks the idea is misguided. 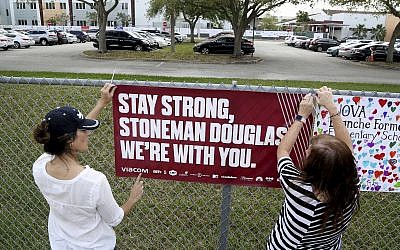 Volunteers hang banners around the perimeter of Marjory Stoneman High School in Parkland, Florida, to welcome back students returning to school Wednesday, February 28, 2018, two weeks after the mass shooting that killed 17 students and staff. (Susan Stocker/South Florida Sun-Sentinel via AP)

The House Appropriations Committee’s 23-6 vote in favor of the bill Tuesday followed more than four hours of emotional discussion with the parents of some of the 17 killed, and nearly two weeks of activism by students on social media and in televised debates.

Gov. Rick Scott, who met with officials in Miami-Dade County on Tuesday, said at a news conference that he hopes a gun and school-safety bill is passed before Florida’s annual legislative session ends on March 9. He had proposed measures that overlap with the Legislature’s plan but did not include arming teachers. However, he declined to say Tuesday whether he would veto the sweeping package if it included that provision.

The Senate’s version of the school-safety bill was approved by a second committee on a 13-7 vote Tuesday evening. Sen. Bill Galvano, who is designated to become the next Senate president and is ushering through the bill, said the earliest it will be considered by the full Senate is Friday.

Marion Hammer, a lobbyist for the National Rifle Association and Unified Sportsmen of Florida, told the House Appropriations Committee that she supports tightening school security and keeping guns out of the hands of the mentally ill, but not the House bill’s gun-ownership restrictions, which she later said would not have stopped the Parkland shooting.

“Part of what we need to do is make people understand that guns are not the problem,” she said after the hearing. “So passing more laws dealing with guns as a solution to a problem that exists within the enforcement of laws is just kind of silly.”

“If we would have had these measures in place, I would not have had to bury my son next to his mother a week and a half ago. … I’m pleading for your help. I’m willing to compromise. Are you?” he asked.