IDF, US Troops Get Ready For Drill To Simulate Massive Missile Attack On Israel

The Israeli military on Thursday began its final preparations for a major air defense exercise with the United States, which is set to kick off at the beginning of next month, the army said.

While the Juniper Cobra exercise, which was first held in 2001, is scheduled every two years, it comes at a time of growing tension between Israel and Iran and the Iranian proxy Hezbollah. This year’s exercise simulates a massive ballistic missile attack against Israel and is also meant to improve ties between the two armies.

The exercise will largely be performed through advanced computer simulations, though it will also include some real-world activities.

In total, some 4,500 soldiers from the two militaries will take part in the exercise — 2,500 of them from the United States’ European Command (US EUCOM) and 2,000 from the Israel Defense Forces. This is a substantial increase from the 2016 exercise, in which some 3,200 soldiers took part.

The Juniper Cobra exercise is scheduled to begin on March 4 and will formally run until March 15, though some American troops will stay in Israel and continue training with the IDF until the end of the month, the army said.

The threat from ballistic and guided missiles is one of the most significant threats facing Israel, and Israeli officials say it is growing. 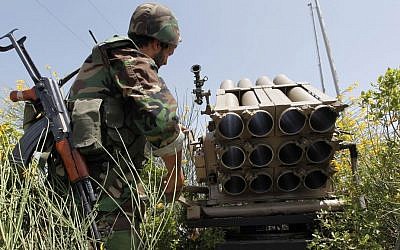 File: In this May 22, 2010 file photo, a Hezbollah fighter stands behind an empty rocket launcher while explaining various tactics and weapons used against Israeli soldiers on the battlefield. (AP/Hussein Malla)

The Iran-backed, Lebanese Hezbollah terrorist organization is suspected of maintaining a stockpile of some 150,000 missiles, which it could rain down on Israel at a rate of over 1,000 missiles a day in a future war.

Last weekend, Prime Minister Benjamin Netanyahu also revealed to the Munich Security Conference that Iran was looking to outfit the group with superior, precision-guided missiles, capable of hitting a target with an accuracy of a few dozen meters.

Iran too has an advanced ballistic missile program.

In Gaza, both the Hamas and Palestinian Islamic Jihad groups are believed to each have their own arsenals containing upwards of 10,000 rockets and mortars, though of an inferior quality, owing to the blockade of the coastal enclave enforced by both Israel and Egypt.

The air defense drill will take place a few short weeks after Israeli aircraft squared off against an Iranian drone and Syria’s air defense systems, though the IDF stresses that the biennial Juniper Cobra was planned long in advance and is not connected to any particular event. 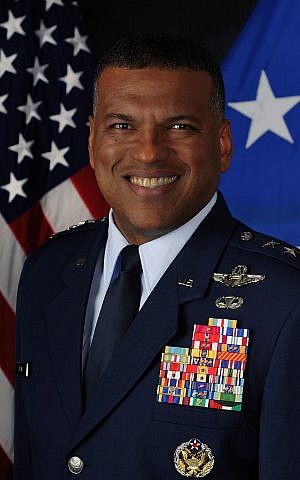 American soldiers have been arriving to Israel over the past few weeks, ahead of the exercise. Israel has done some light preparation for the drill, but will step up its efforts considerably before the kick-off date.

“The Juniper Cobra exercises continue to strengthen this relationship, providing us with the opportunity to bolster interoperability and develop seamless integration with our Israeli partners,” said Lt. Gen. Richard M. Clark, commander of the US Third Air Force, who will lead the American delegation.

During the exercise, the American and Israeli forces will train on the long-range Arrow and Patriot air defense systems, the medium-range David’s Sling, and the short-range Iron Dome, the army said.

It will be the first time that the David’s Sling will be used in a Juniper Cobra exercise, as the system was only declared operational last year. 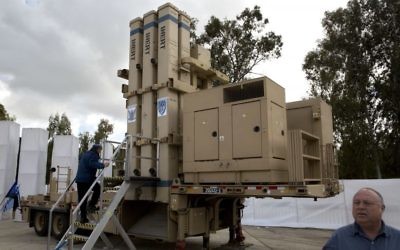 “The Juniper Cobra 2018 exercise is another step in improving the readiness of the IDF and air force for battle and for facing the ballistic threat,” said the head of Israel’s air defenses, Brig. Gen. Tzvika Haimovitch, on Thursday.

“In the coming weeks, we will simulate challenging and complicated scenarios that are based on the operational reality,” the brigadier general said.

On Monday, a top IDF general warned that this year was more likely to see war break out between Israel and the Iranian-led axis of Tehran, Damascus, and the Beirut-based Hezbollah terrorist organization — all three of which have called for Israel’s destruction — as the trio’s victories in the Syrian civil war will allow them to focus their attentions on fighting the Jewish state.

“The year 2018 has the potential for escalation [of military conflict], not necessarily because either side wants to initiate it, but because of a gradual deterioration. This has led us to raise the level of preparedness,” Maj. Gen. Nitzan Alon, head of IDF Operations, told Army Radio in a rare interview.

Military officials and defense analysts have assessed that a future conflict with Hezbollah — whether it is treated as a third Lebanon war or a first Israeli-Iranian war — would be devastating for both Israel and Lebanon.

In addition to its massive missile arsenal, Hezbollah has also been preparing fighters to infiltrate into Israeli territory and attack a community near the Lebanese border, slaughtering the residents or taking them hostage. 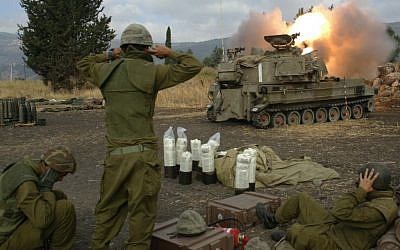 Israeli soldiers cover their ears as they fire artillery shells at southern Lebanon from outside Kiryat Shmona in northern Israel during the Second Lebanon War, on July 22, 2006. (Pierre Terdjman/Flash90)

Israel, for its part, has prepared a massive list of Hezbollah targets that it can strike with aircraft and artillery, and IDF ground forces have trained for fighting in Lebanese terrain, most recently in a series of exercise completed Thursday.

Speaking at an annual conference held by Tel Aviv University’s Institute for National Security Studies last month, Defense Minister Avigdor Liberman said that Lebanon will be held to account in a future war because, led by the terrorist Hezbollah group, it has “sacrificed its national interests by subjugating fully to Iran.” 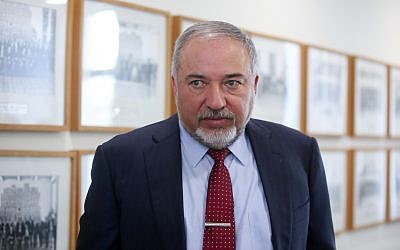 “Lebanon’s army and Hezbollah are the same — they will all pay the full price in the event of an escalation,” Liberman said. “If a conflict does break out in the north, ‘boots on the ground’ remains an option. We won’t allow scenes like in 2006, where we saw citizens of Beirut on the beach while Israelis in Tel Aviv sat in shelters… If people in Tel Aviv will be in bomb shelters, all of Beirut will be in bomb shelters.”

Liberman was referring to the Second Lebanon War, during which dozens of Israelis were killed in the north in rocket attacks — though Tel Aviv did not come under attack.

Over the past year, Israel has often warned of a growing Iranian influence in Lebanon, with Liberman telling United Nations Secretary-General Antonio Guterres in August that Iran is “working to set up factories to manufacture accurate weapons within Lebanon itself.”