Israeli troops opened fire at a number of Palestinian rioters who tried to damage the security fence around the Gaza Strip on Thursday, the army said.

According to the army, approximately 200 Palestinians took part in violent protests at four main locations along the security fence, lighting fires and throwing rocks at Israeli soldiers on the other side.

The soldiers targeted a handful of “main instigators” who were trying to pull down portions of the fence, an army spokesperson said.

There were no immediate reports of injuries by the Hamas-run Gaza health ministry.

The riots came as Palestinians in Gaza pitched tents near the volatile border with Israel ahead of a six-week protest camp under the gaze of wary Israeli soldiers. 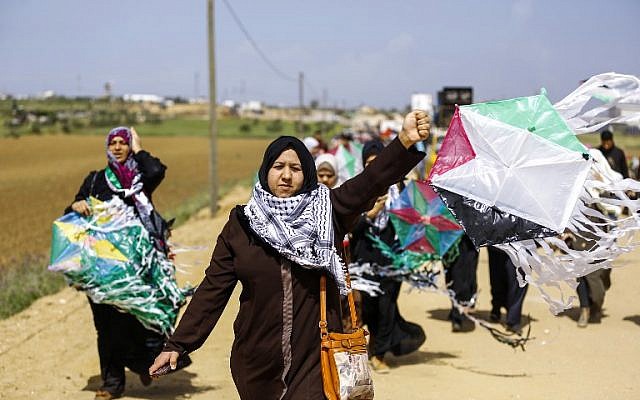 Palestinian women fly kites marked with the colors of the Palestinian flag during a demonstration ahead of the Land Day, at a tent city along the border with Israel east of Gaza City on March 29, 2018. (AFP PHOTO / MOHAMMED ABED)

The exceptional protest is dubbed “The Great March of Return” and has the backing of the Gaza Strip’s terrorist Hamas rulers.

The protest comes amid rising tensions as the United States prepares to move its embassy in Israel to Jerusalem.

Organizers said it would be peaceful but Israeli officials are wary of a fresh flareup along the enclave’s border.

In a Wednesday interview with the Israel Hayom daily, IDF Chief of Staff Gadi Eisenkot warned that “if the Palestinians think they will organize a march and it will pass the [border] fence and they will march into our territory, they’re wrong.”

“A big portion of the army will be invested there,” Eisenkot told the rival Yedioth Ahronoth daily on the same day, adding that more than a hundred snipers, most from “special units,” had been stationed in the area. 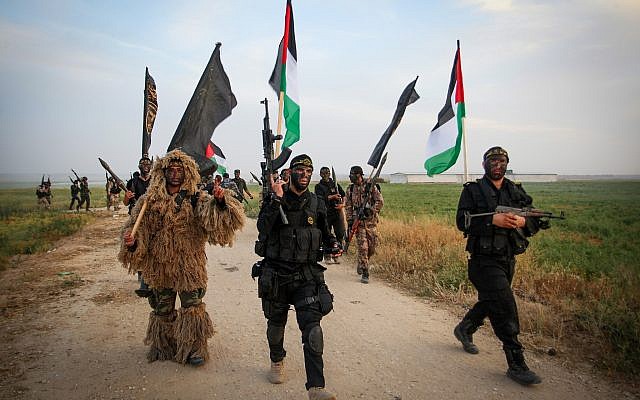 Palestinian Islamic Jihad militants march during a military drill near the border with Israel, east of the town of Khan Younis in the southern Gaza Strip, on March 27, 2018. (Abed Rahim Khatib/ Flash90)

“If there will be a danger to lives, we will authorize live fire,” he declared. “The orders are to use a lot of force.”

The first protest is set to kick off on Friday, when Palestinians worldwide mark Land Day, which commemorates the Israeli government’s expropriation of Arab-owned land in the Galilee on March 30, 1976, and ensuing demonstrations in which six Arab Israelis were killed.

It is also, by coincidence, the eve of the week-long Passover festival.

Camping and protests in Gaza are expected to continue until mid-May, around the time the US is set to inaugurate its new embassy in Jerusalem.

Mid-May will also mark the anniversary of the Nakba, or catastrophe, which saw hundreds of thousands of Palestinians flee their homes during Israel’s 1948 War of Independence.

According to the United Nations, some 1.3 million of Gaza’s 1.9 million residents are refugees or their descendants.

Khaled al-Batsh, the leader of the Islamic Jihad terror group, which is among the planners of the protest, said tents would be located 500 meters from the border, just outside the buffer zone between Gaza and Israel.

Water facilities were being installed and medical teams deployed to allow people to stay for long periods.

Organizers said tens of thousands of people would attend Friday’s protest, although it was not clear how the estimate was reached.

Batsh said protesters were calling for Palestinians to be allowed to return to land that is now inside Israel. “Seventy years ago we left and today we have decided to return to our country,” he told AFP.

But senior Hamas figure Salah Bardawil said that while protesters might breach the border, they were not planning to do so.

Hamas officials say they will monitor the area beyond the camp sites to prevent protesters going too close to the frontier, at least during the initial days of the protest.

Five main campsites have been set up, spanning the length of the coastal territory from near the Erez border crossing in the north to Rafah in the far south, near Egypt.

On Thursday, around 20 family tents were pitched at a site near Erez, alongside two larger community tents for performances including the traditional Palestinian “dabke” dance.

At another site, young men were putting the finishing touches on dozens of wooden toilets, while large generators whirred into life. 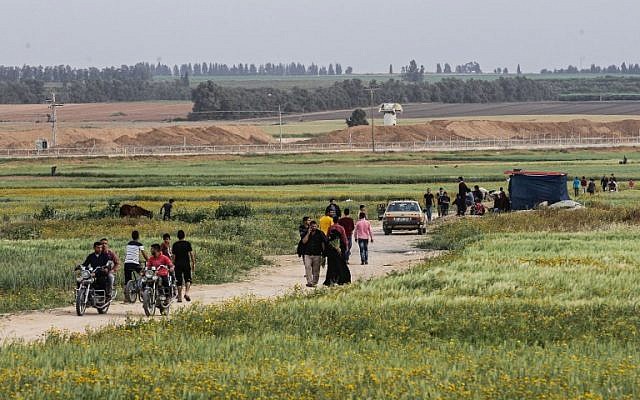 Palestinian people walk and drive near the Gaza-Israel border on the outskirts of Khan Yunis in the southern Gaza Strip on March 28, 2018. (AFP PHOTO / SAID KHATIB)

Another organizer, Tahir Sawirki, told AFP Palestinians would gather Friday in groups representing the towns they left in 1948.

He said tens of thousands of meals would be prepared for more than 100,000 expected participants.

Israel says it is prepared

Meanwhile, Defense Minister Avigdor Liberman warned Palestinians that anyone who cooperates with Hamas on its planned mass tent protest will be forever banned from entering Israel. He accused Hamas of escalating tensions by offering residents benefits to participate in the tent protest.

“No Palestinian from Gaza comes willingly to confront IDF forces on the border. They are all Hamas operatives or family forced to come — the bus rides, free internet, toilets, tents. Soon they’ll have a rock concert so people will come,” he joked.

“We are prepared, and I’m sure we will enable the Israeli public to celebrate Passover calmly and with security,” Liberman said, adding later in a tweet that “many soldiers” would not be furloughed for the Passover Seder.

Liberman called on Gazans to refuse to come and to revolt against the Hamas regime.

“You know who is responsible for your dire situation,” he addressed Gaza residents. “Try changing things from the inside. Anyone who we identify as having aided Hamas’s efforts will never be allowed to enter Israel, won’t be able to do business here, nothing.”