Liberman: There’s No Humanitarian Crisis In Gaza, We Won’t ‘Spend A Penny’

Defense Minister Avigdor Liberman declared on Monday that there was no humanitarian crisis in Gaza, and rejected news reports signaling Israel could send direct aid to the coastal enclave to prevent mounting economic woes from triggering full-out war.

Opposition leaders, meanwhile, were calling on the Israeli government to immediately intervene in Gaza.

“The situation in Gaza is indeed difficult,” conceded Liberman at the weekly meeting of his Yisrael Beytenu faction in the Knesset, and the economic situation “must be dealt with.”

“But there is no humanitarian crisis,” he added, emphasizing that he was speaking on behalf of the entire defense establishment, including COGAT, the Defense Ministry agency that administers the crossings into Gaza; and the Shin Bet security agency.

Israel will not impede any internationally funded projects designed to improve the quality of life for Gazans, said Liberman. But, he added, “We will not spend a penny from the Israeli budget. I refuse to allow any penny of Israeli tax money to go to the Strip. There are enough wealthy Arab countries.” 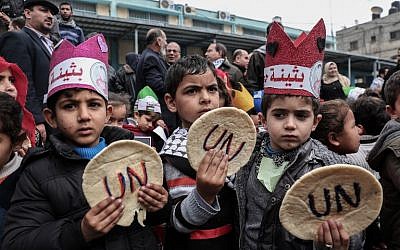 Palestinian children hold bread patties during a protest against aid cuts, outside the United Nations’ offices in Khan Yunis in the southern Gaza Strip on January 28, 2018. (SAID KHATIB/AFP)

His comments came days after Hadashot TV news reported that Israeli security officials were weighing sending food and medicine to the Gaza Strip for the first time, in an effort to prevent the deteriorating conditions from spiraling into violence.

On Sunday, IDF Chief of Staff Gadi Eisenkot reportedly warned ministers during a cabinet meeting that Israel could soon face another war with Hamas as a result of the humanitarian and economic conditions in the coastal enclave. The chief of staff favored stepping up aid to the enclave, according to the report.

But Liberman was adamant on Monday that there was widespread “disinformation” about the Israeli security position.

“We cannot take responsibility for the Strip,” said Liberman.

He said the Hamas terror group has poured $260 million into manufacturing rockets and digging tunnels in the Gaza Strip just in the past year. Of that, $100 million came from Iran and the remainder from Gaza taxes.

The Hamas leadership is unwilling to “divert even a shekel” to fix Gaza’s water and electricity woes, said Liberman, while the terror group’s leaders have electricity “24 hours a day.”

Hamas is sure “Israel will blink first” and step in to aid the troubled enclave, he said.

Liberman also dismissed reports by Hamas that Israel is planning an attack in the Strip. “We have no intention to initiate any military action in Gaza,” he said.

He further branded calls for Israeli-sponsored intervention “a mistake,” and said talk of rehabilitating Gaza without any progress toward Hamas returning Israeli captives and the bodies of two soldiers it holds is “immoral.”

Eisenkot, according to the leaks to Israeli media on Sunday, had sought to condition the full rehabilitation of the enclave on the return of the Israeli captives and soldiers’ remains.

Earlier on Monday, opposition leaders implored the government to intercede in Gaza.

“The State of Israel cannot afford to continue to ignore this crisis,” said Yesh Atid leader Yair Lapid at his weekly faction meeting in the Knesset. “Not on a humanitarian level, and not on a security level.” 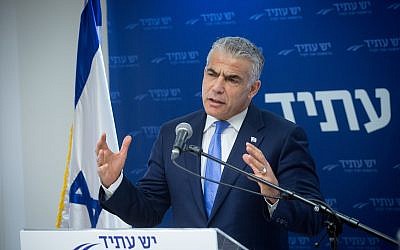 “The State of Israel cannot stand by while children’s wards in hospitals are disconnected from electricity,” he added. “This is against everything we believe in.”

Last Wednesday, the Hamas-run health ministry in the Palestinian enclave said seven medical centers had stopped services due to lack of fuel to power generators.

Lapid said the Hamas terrorist group is still militarily “deterred” by the 2014 Gaza war, “but if we don’t do something, we are on our way to another round of violence.”

Echoing Eisenkot, Lapid urged Israel to condition the full rehabilitation of the Strip on the return of the bodies of two IDF soldiers held in the enclave and the release of Israelis captive there. But Israel must take immediate rehabilitation steps to thwart another conflict, he added

“They know what’s going on there and what must be done,” he said. “They don’t have political considerations and aren’t afraid of how things will look on the news.”

Israel has maintained a blockade on Gaza for over a decade, which it says is necessary to prevent the Hamas terror group, which is sworn to Israel’s destruction, from smuggling in weapons and material used for digging tunnels into Israel. Israel and Hamas have fought three wars, which have severely harmed Gaza’s infrastructure, and reconstruction efforts have been slow.

Earlier this month, the White House froze around $100 million in contributions to UNRWA, the UN agency for Palestinian refugees, after the Palestinians announced they would no longer accept the US as a mediator in peace talks with Israel. The Palestinians were angered after US President Donald Trump on December 6 recognized Jerusalem as Israel’s capital.

A flurry of recent reports have warned that the enclave is on the verge of collapse, its 1.8 million inhabitants plagued by frequent electricity blackouts and undrinkable water.