A military court on Monday indicted 16-year-old Palestinian Ahed Tamimi and her mother, Nariman, both of whom were filmed slapping and shoving IDF soldiers last month in their West Bank village of Nebi Saleh.

The mother and daughter were both charged with aggravated assault of soldiers in the December 15 incident.

The indictment against the teenager cited a total of 12 counts, which took into account five other squabbles with IDF soldiers that she was alleged to have taken part in over the past two years.

While the Military Advocate General requested that both Ahed and Nariman be remanded until the end of proceedings against them, the Judea Military Court judge ruled that the pair be remanded only for an additional eight days to provide the Tamimis’ attorney enough time to prepare a defense.

Among the charges against Ahed were aggravated assault of a soldier, threatening a soldier, preventing soldiers from carrying out their duties, incitement, disturbing the public peace and stone throwing.

Regarding the incitement charge, the MAG cited a statement given by Ahed to her mother, who was filming the December 15 incident on Facebook Live. Immediately following the squabble, Nariman asked her daughter what kind of message she wanted to convey to viewers.

“I hope that everyone will take part in the demonstrations as this is the only means to achieve the result,” she said. “Our strength is in our stones, and I hope that the world will unite to liberate Palestine, because [Donald] Trump made his declaration and [the Americans] need to take responsibility for any response that comes from us,” Ahed added, apparently referring to the US president’s decision last month to recognize Jerusalem as Israel’s capital.

“Whether it is stabbings or suicide bombings or throwing stones, everyone must do his part and we must unite in order for our message to be heard that we want to liberate Palestine,” she concluded.

The MAG said the Facebook Live stream earned “thousands of views” and “dozens of likes.” 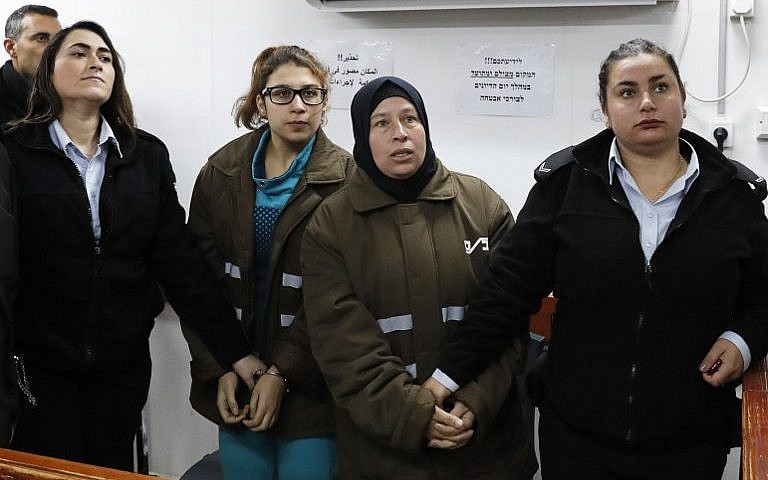 Nour Tamimi (2L) and her aunt Nariman Tamimi (2R) attend a hearing at the Ofer military court in the West Bank on January 1, 2018. (AFP Photo/Ahmad Gharabli)

While Nariman was also charged with aggravated assault, footage from the incident did not appear to show the mother doing anything beyond pushing the soldiers off the family’s property.

Ahed’s cousin Nour Tamimi, who also took part in the incident, was indicted on Sunday for aggravated assault and preventing soldiers from carrying out their duties. The court ordered on Monday that she be released, but a 24-hour stay in execution was granted, giving the prosecution the opportunity to appeal the decision.

Gabi Lasky, who represents the Tamimis, on Sunday accused the court of “playing along with the prosecution’s theatrics.”

Footage from the December 15 encounter in Nabi Saleh shows Ahed and Nour approaching two Israeli soldiers, then shoving, kicking and slapping them, while filming on their cellphones.

They move backwards after Nariman arrives and begins pushing the soldiers herself. The armed soldiers do not respond in the face of what appears to be an attempt to provoke them. 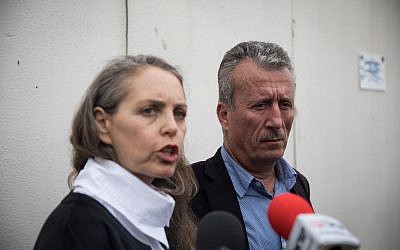 In Ahed’s version of the incident, shared in front of the court during a hearing last month, she said that the same soldiers featured in the video had shot her cousin in the head with a rubber bullet an hour prior to the filmed encounter. “Then I saw the same soldiers who hit my cousin, this time in front of my house. I could not keep quiet and I responded as I did,” the 16-year-old testified.

Photos of Ahed’s cousin Muhammad Tamimi have been widely shared on Palestinian social media, showing the young boy’s face badly bruised and scarred. The Palestinian Ma’an news outlet had reported that he was in an induced coma due to the injuries, but has since woken up.

Nabi Saleh — 20 kilometers (12 miles) north of Ramallah — has been a frequent staging ground for clashes between Israeli soldiers and Palestinians, specifically members of the Tamimi family, which has a history of involvement in highly publicized clashes with the IDF.

In August 2015, an IDF soldier was caught on film trying to arrest Ahed’s cousin Muhammad Tamimi, who had been throwing rocks during a violent protest.

Videos of the December 15 alleged assault were widely picked up by Israeli media, which often accuse Palestinian protesters of seeking to provoke the army into responses, only to be filmed. Ahed Tamimi has also since become an icon of resistance to Palestinians.

Some Israeli politicians hailed the restraint of the soldiers as evidence of the military’s values, while others called for tough responses in the face of seeming humiliation.

Palestinians on social media criticized Ahed’s arrest in the middle of the night, and have asserted it is the people’s right to resist military occupation. 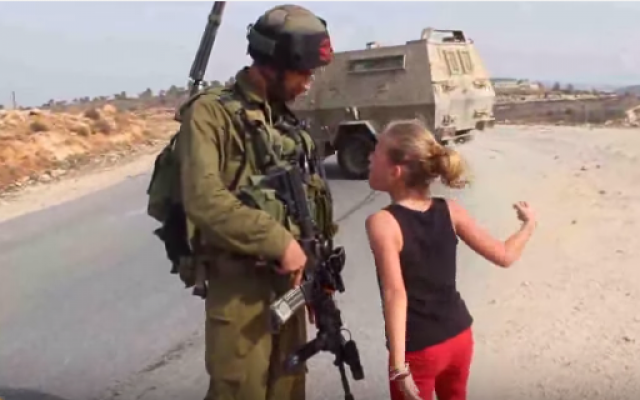 A’hd Tamimi, sister of the boy whose attempted arrest by an Israeli soldier led to a West Bank scuffle on August 28, faces up to a soldier in 2012 (Screen capture via YouTube)

In 2012, Ahed gained fame among Palestinian activists for an incident in which she led a group of children, including her younger brother, in arguing with Israeli soldiers. In a video of the incident, she can be seen repeatedly raising her balled fist at a soldier, poised to hit him, but never actually doing so.

Ahed first appeared before the Ofer Military Court on December 19. Explaining her decision to remand her at the time, Judge Lidor Drachman of the Judea region Juvenile Military Court said that while Ahed Tamimi did not pose any danger, concern that the teen would try to obstruct the investigation justified keeping her locked up.