Prime Minister Benjamin Netanyahu on Saturday said Israel “fully supports” the pre-dawn airstrikes on Syrian military targets led by the US in a joint operation with Britain and France in response to the Assad regime’s alleged use of chemical weapons earlier this month.

In a statement issued by the Prime Minister’s Office on Saturday, Netanyahu said, “A year ago, I made clear that Israel fully supports the decision by [US] President [Donald] Trump to stand against the use and spread of chemical weapons,” referring to American strikes against the Syrian regime in April 2017 after a sarin gas attack on a rebel-held town.

“This morning, under American leadership, the United States, France, and the United Kingdom demonstrated that their commitment to the fight against chemical weapons is not limited to declarations,” he went on.

Netanyahu said that it should be “clear to President Assad that “his reckless efforts to acquire and use weapons of mass destruction, his wanton disregard for international law and his provision of a forward base for Iran and its proxies endanger Syria.” 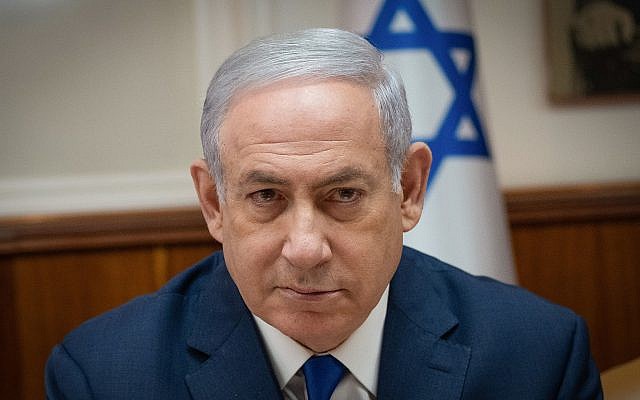 Earlier Saturday, Netanyahu’s office reportedly ordered Israeli ministers not to talk about the US-led missile strikes, after a minister and lawmaker hailed the pre-dawn raids as a measured response to Damascus’ alleged use of chemical weapons.

According to Channel 10, Netanyahu’s office issued the directive hours after Housing Minister Yoav Galant said the joint military operation carried out by the US, Britain, and France sent “an important signal to the axis of evil — Iran, Syria, and Hezbollah.”

Galant, a member of the security cabinet and a former general, earlier tweeted that “the use of chemical weapons crosses a red line that humanity is no longer willing to accept.”

Zionist Union MK Tzipi Livni also welcomed the strikes on Saturday, saying “that world powers are sending the message that they will not tolerate the use of chemical weapons.” She also urged the US to prevent further Iranian military entrenchment in Syria, calling it “against global interest and dire for Israel.”

Earlier in the day, an unnamed official in Jerusalem said that Israel considered the strikes an “appropriate” response to the Syrian regime’s suspected chemical gas attack on the rebel-held town of Douma last week, and warned that Damascus’s actions put it in danger of further strikes, including against its leadership.

“Last year, [US] President [Donald] Trump made it clear that using chemical weapons crossed a red line. Tonight, led by the Americans, the US, France, and Britain acted appropriately,” said a statement attributed to an unnamed official. 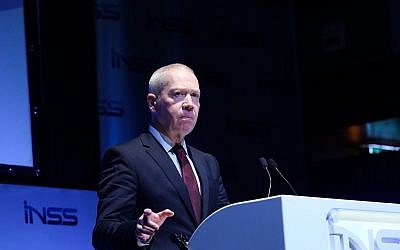 Housing and Construction Minister Yoav Galant speaks at the Annual International Conference of the Institute for National Security Studies in Tel Aviv on January 31, 2018. (Flash90)

“Syria continues to carry out murderous actions and to be a base for these and other actions, including by Iran, that puts its territory, forces and leadership in danger,” the terse statement said.

Israel was informed ahead of the strikes, sources said.

US President Donald Trump announced the joint action against Assad’s regime from the White House late Friday. He said the strikes were a direct response to the April 7 attack on Douma, outside Damascus, that rescuers and monitors say killed more than 40 people.

“The evil and the despicable attack left mothers and fathers, infants and children thrashing in pain and gasping for air. These are not the actions of a man. They are crimes of a monster instead,” Trump said.

US Defense Secretary Jim Mattis called the strikes a “one-time shot” with no additional military action planned for now.

The strikes were the biggest foreign military action so far against Syria’s regime.

The facilities hit had however reportedly been evacuated in recent days. 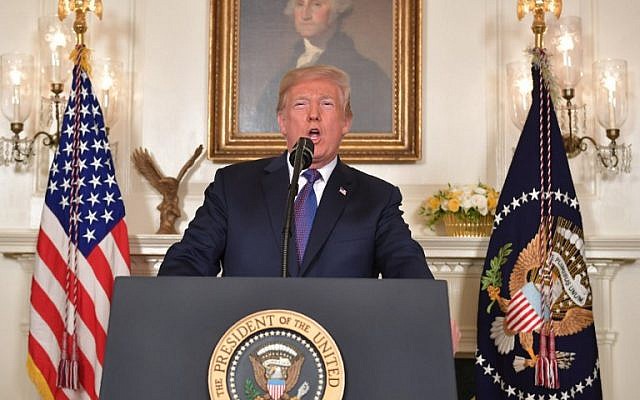 US President Donald Trump addresses the nation on the situation in Syria April 13, 2018 at the White House in Washington, DC. Trump said strikes on Syria were under way. (AFP PHOTO / Mandel NGAN)

Syrian state media reported only three people injured, while Russia’s defense ministry said there were “no victims” among Syrian civilians and military personnel.

“A perfectly executed strike last night. Thank you to France and the United Kingdom for their wisdom and the power of their fine Military,” Trump tweeted early Saturday.

“Could not have had a better result. Mission Accomplished!”

Assad, who has denied ever using chemical weapons against his opponents, responded to the strikes with a defiant vow.

“This aggression will only make Syria and its people more determined to keep fighting and crushing terrorism in every inch of the country,” he said.

Though the remarks by the Israeli officials primarily praised the US-led strikes, their mention of Iran’s continued attempts to entrench itself in Syria reflected Israel’s primary concern.

Israel revealed on Friday that an Iranian drone shot down in Israeli airspace in February was carrying explosives. The drone was launched from an airbase in Syria. That base was attacked on Monday, allegedly by Israel, in a strike that reportedly targeted Iran’s entire attack drone weapons system — prompting soaring tensions between Israel and Iran. 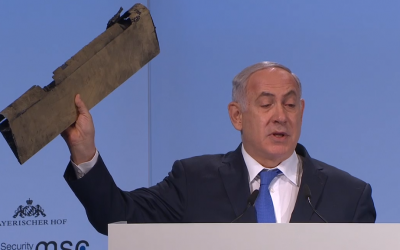 Prime Minister Benjamin Netanyahu waves part of an Iranian drone downed in Israeli airspace on February 10, 2018, during a speech on the third day of the 54th Munich Security Conference (MSC) held at the Bayerischer Hof hotel, in Munich, southern Germany, on February 18, 2018. (Screen capture)

The Iranian drone shot down in February was carrying enough explosives to cause damage, military sources said. Its precise intended target in Israel was not known, they said.

The February incident marked an unprecedented direct Iranian attack on Israel. Israel’s acknowledgment of the nature of the drone’s mission “brings the confrontation” between Israel and Iran “into the open” for the first time, Israel’s Channel 10 news noted Friday.

Netanyahu used a speech on Holocaust Remembrance Day this week to warn Iran: “Don’t test the resolve of the State of Israel.”

The alleged Israeli attack this week on the base from which the drone was dispatched is understood to have targeted Iran’s entire drone weapons system at the Syrian base, which was protected by surface-to-air missiles and other defenses, the TV report said.

“This was a harsh blow” to the Iranians, it added. “It is clear they will react.”

Immediately after shooting down the Iranian drone on February 10, Israel carried out airstrikes against a number of Iranian targets in Syria, including on the T-4 base in central Syria where the Iranian operator of the drone was located. 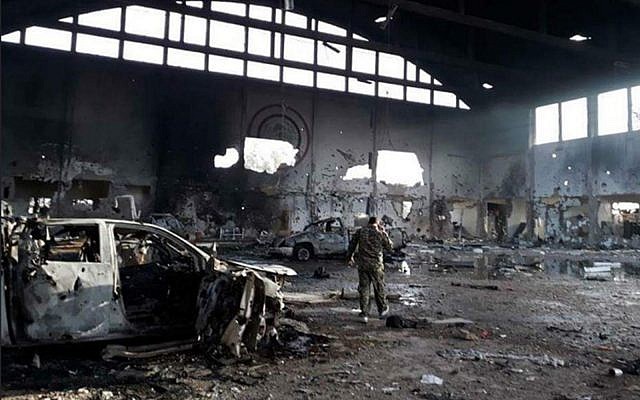 A photo released by Iranian media reportedly shows the T-4 air base in central Syria after a missile barrage attributed to Israel on Monday April 9, 2018. (Iranian media)

During the aerial raids, an Israeli F-16 was downed by a Syrian anti-aircraft battery, crashing in northern Israel, prompting further retaliatory raids against Syria’s anti-aircraft systems. Both the Israeli pilots ejected.