In that vein, US Secretary of State Mike Pompeo’s landmark speechMonday, in which he insisted Iran embark on a “fundamental strategic shift,” was reminiscent of the 1943 Casablanca Conference, where US president Franklin D. Roosevelt declared he was demanding nothing less than “unconditional surrender” from the Axis powers.

How the American standoff with Iran will end is still entirely open. Supporters of the US administration’s new hardline position argue that only the stick will get the ayatollah regime to change its evil ways. Others wonder whether there is a Plan B should Tehran reject Washington’s maximalist demands and new sanctions fail to have the desired impact.

In Israel, support for Pompeo’s requirements for Iran — including that it entirely abandon its nuclear program, end its support for Hezbollah, cease the sponsorship of terror and threats of Israel’s destruction, and withdraw all troops from Syria — and his threat of “the strongest sanctions in history,” is a matter of consensus.

“We believe this is the right policy. We believe it’s the only policy that could ultimately guarantee the security of the Middle East and peace in our region,” Prime Minister Benjamin Netanyahu said on Monday evening in Jerusalem, mere moments after Pompeo delivered his speech at the The Heritage Foundation in Washington, DC.

In an exceedingly rare step, Israel’s Foreign Ministry posted a complete transcript of Pompeo’s speech on its website.

Even former US ambassador to Israel Dan Shapiro, who supported the 2015 Iran nuclear agreement and opposed President Donald Trump’s recent decision to quit the deal, said he seconds each of Pompeo’s 12 demands.

“What I and many others have trouble understanding is what is the strategy to achieve all these worthy objectives,” Shapiro tweeted, however. “Issuing the demands? Check. Tougher sanctions? OK, even if we have to punish our allies for doing what they are permitted to do under the JCPOA,” he wrote, using the Iran deal’s technical name.

Pompeo, in his Monday speech, threatened that the “sting of sanctions will be painful if the regime does not change its course from the unacceptable and unproductive path it has chosen.” 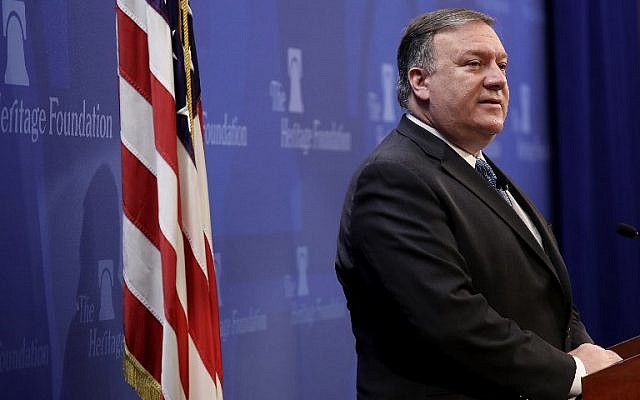 US Secretary of State Mike Pompeo speaks at the Heritage Foundation on May 21, 2018. (Win McNamee/Getty Images/AFP)

But the administration “underestimates how hard it is to make secondary sanctions have crippling effects when others seek to evade them,” Shapiro said, referring to the prohibition on other countries to trade with Iran. The European Union, China and Russia have all made plain that they oppose anything that could hurt their economic interests.

Pompeo’s promise to impose the “strongest sanctions in history” rings a bit hollow as long as Iran’s major trading partners refuse to get on board, former US ambassador to Russia Michael McFaul noted.

The Iranian regime is evil, and “the sooner it is gone from this world the better,” Shapiro stated, but to simply ask Tehran stop doing bad things and “squeeze them a bit with middling help from allies, promise normal relations if they fully comply [and] call on the people to rise up” will be unlikely to lead to the desired outcome. 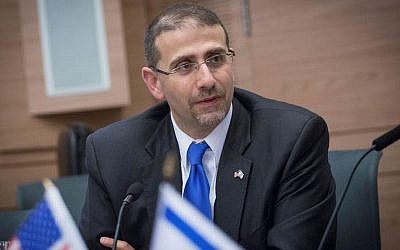 Then US ambassador to Israel Dan Shapiro seen at a farewell session in the Knesset, on January 17, 2017. (Miriam Alster/Flash90)

“So I’m open to hearing the argument, linked to a realistic assessment of our capabilities. Among Obama Admin[istration] alumni and JCPOA supporters (I still believe leaving it was a mistake), Pompeo won’t find a more open listener than me, ready to support a strategy with a chance to work,” Shapiro wrote. “So far, I don’t hear it, and I don’t get it.”

Pompeo himself acknowledged that, “to some, the changes in Iranian behavior we seek may seem unrealistic,” but noted that before the 2015 Iran deal was signed, his demands were widely accepted by the international community.

“It’s not a pipe dream to ask the Iranian leadership to behave like a normal, responsible country. Our asks are simple,” he tweeted.

To be sure, Iranian leaders on Monday evening wasted no time slamming Pompeo’s speech, making plain that Tehran has no intention of acquiescing.

No outright threats of military action

What stood out in Pompeo’s uncompromising speech was the absence of an explicit threat of military action.

Much like Trump did on May 8, when he announced his decision to quit the Iran deal, Pompeo merely said that the regime “will have bigger problems than it has ever had before” if it failed to comply with the administration’s demands.

On Tuesday morning, Intelligence Minister Israel Katz applauded Pompeo for his stance on Iran, including his “threat of severe economic sanctions and the use of military force” if the regime were to renew its nuclear program.

“As it’s been proven in the case of North Korea, the only way to curb determined dictatorships seeking nuclear weapons is by imposing severe sanctions and showing a willingness to use force,” Katz said in praising Trump’s decision.

But did Pompeo really issue a credible threat of military force?

He vowed to “work closely with the Department of Defense and our regional allies to deter Iranian aggression.” He promised to ensure “freedom of navigation on the waters in the region,” to counteract “Iranian malign cyber activity” and to “crush” Iranian operatives and their Hezbollah proxies around the world. 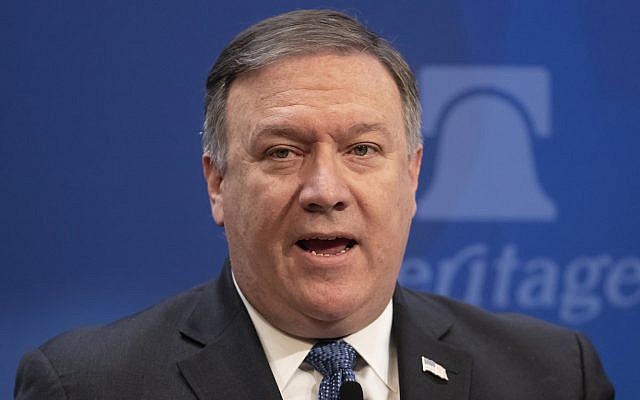 US Secretary of State Mike Pompeo lays out the Trump administration’s new Iran strategy at the Heritage Foundation, a conservative public policy think tank, in Washington, on May 21, 2018. (AP Photo/J. Scott Applewhite)

Addressing Iranian leaders directly, he vaguely vowed that their activities would “be met with steely resolve.”

Even the war-averse Barack Obama — whose nuclear deal American and Israeli hawks blame for having emboldened Tehran’s aggressive behavior — was more forthcoming in vowing that all options were on the table to thwart Iran’s attempt to build a nuclear weapon.

“I’ve ordered military action in seven countries. There are times when force is necessary, and if Iran does not abide by this deal, it’s possible that we don’t have an alternative,” Obama said during an August 2015 speech in defense of the nuclear pact. 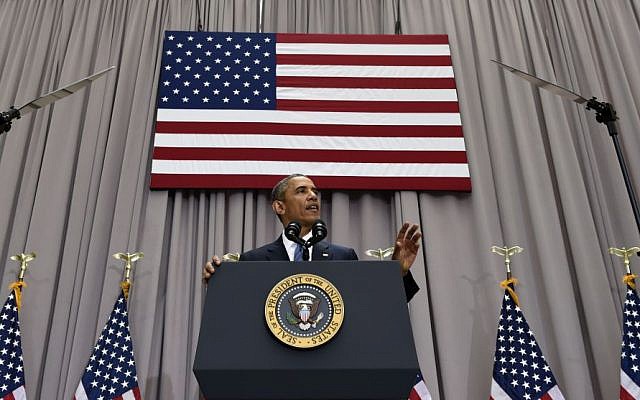 US president Barack Obama speaks about the nuclear deal with Iran, August 5, 2015, at American University in Washington. (AP Photo/Susan Walsh)

“Our military remains the ultimate backstop to any security agreement that we make,” he added, noting that America’s defense budget is 40 times larger than Iran’s.

“I have stated that Iran will never be allowed to obtain a nuclear weapon, and have done what is necessary to make sure our military options are real. And I have no doubt that any president who follows me will take the same position,” Obama predicted.

If so, neither Trump and Pompeo have thus far said so explicitly.

When Roosevelt demanded unconditional surrender during World War II, he sent massive numbers of troops into enemy territory. Trump, on the other hand, wants US troops out of the Middle East and will likely hesitate a great deal before doing anything that may drag US troops into a prolonged military conflict with Iran.

In search of regime change

Rather than raising the specter of another costly Middle East war — something his political base is sure to loathe — the US president seems to be placing his bets on economic warfare, which, Pompeo’s speech made quite clear, should eventually lead to regime change.

The US secretary of state on Monday devoted large segments of his speech to directly addressing ordinary Iranians, all but urging them to overthrow their repressive government.

“Today we ask the Iranian people: Is this what you want your country to be known for, for being a co-conspirator with Hezbollah, Hamas, the Taliban, and al-Qaeda? The United States believe you deserve better,” he said.

The regime’s military adventurism in the region, and support for terrorism worldwide, costs billions but does nothing to improve the lives of hardworking Iranians, he said.

“The regime reaps a harvest of suffering and death in the Middle East at the expense of its own citizens. Iran’s economy is stagnant and without direction and about to get worse. Its young people are withering under the weight of frustrated ambitions. They are longing to pursue the freedoms and opportunities of the 21st century,” he went on.

If Iran is willing to make major changes, the US is “open to new steps” with the country, he said, knowing full well that the current political leadership is highly unlikely to make the changes he demanded. 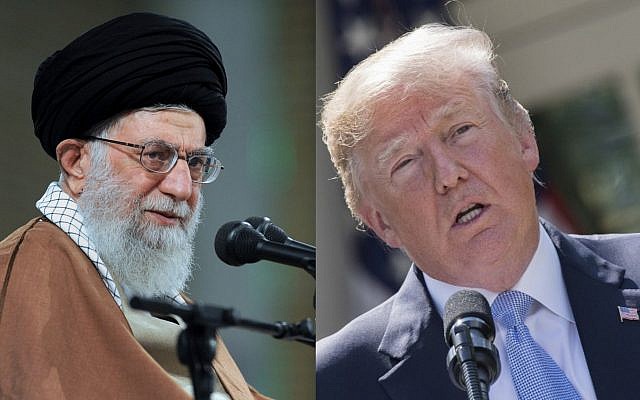 Ayatollah Ali Khamenei “will not live forever, nor will the Iranian people abide the rigid rules of tyrants forever,” Pompeo said, adding that the US hopes its current efforts will “bear fruit for the long-suffering people of Iran. We long to see them prosper and flourish as in past decades and, indeed, as never before.”

The Obama administration sought to delay Iran’s quest for nuclear weapons for a decade, quietly hoping for regime change but explicitly threatening military action if Tehran were to try to rush for the bomb, and ignoring the regime’s conventional acts of aggression.

Whether through regime change or military force, Israel will welcome anything that gets Iran to abandon its nuclear ambitions and its efforts to destroy the Jewish state. The next few months will show if Pompeo’s plan will pan out.

Share
Facebook
Twitter
WhatsApp
Telegram
Email
Previous articleAtiku Denies Visiting Jang In Prison, NAN Stands By Its Story
Next articleBuhari: Where Is Electricity, After Billions Spent By Obasanjo, Others?