Rocket Fired From Gaza Hits House In Beersheba; No Injuries

The Lagos State Government says it will start charging face mask defaulters to court from next week, as the period of grace...
View Post
Newsreports

Palestinian terrorists in the Gaza Strip fired a rocket at the southern city of Beersheba early Wednesday that landed and exploded in the courtyard of a house, causing serious damage, but no injuries.

The Israel Defense Forces said it had identified two launches from Gaza. One targeted Beersheba located some 40 kilometers (25 miles) from the Strip. A second rocket was fired out to sea and landed off the coast of a major city in the Tel Aviv area.

Rocket attacks on Beersheba are rare and considered a major escalation. The attack came after Israel’s defense minister warned the military was gearing up for a major strike on Gaza to stop ongoing violence.

Rocket warning sirens blared at 3:40 a.m. and residents reported hearing a loud blast. The rocket landed in the courtyard of a private house. No one was hurt in the explosion but five people were being treated for anxiety.

A Magen David Adom medic said among those treated were a mother and her three children. The woman had lightly hurt her head when she fell running to the bomb shelter when the siren went off, he said, adding that they were taken to a hospital.

A woman and three children were inside this home in #Israel when the rocket from #Gaza slammed into their home. pic.twitter.com/1210PdqRxF

It was only the second rocket fired at Beersheba since the 2014 Gaza war. The previous rocket struck a field north of Beersheba on August 9 and came as Palestinians fired dozens of projectiles at Israeli communities along the Gaza border.

Most of those attacks are carried out with mortars or short-range Qassam rockets, however, Palestinian terror groups can only reach Beersheba with longer-range rockets, notably the Grad.

Even though the sirens went off, the rocket was not intercepted by the Iron Dome system.

Following the attack, the Beersheba municipality announced that schools in the city would be closed for the day.

In an initial response,  Defense Minister Avigdor Liberman ordered the crossings into Gaza closed. Media reports said IDF Chief of Staff Gadi Eisenkot was cutting short his visit to the US, following the attack.

The attack come after Liberman on Tuesday urged the cabinet to authorize large-scale military campaign against the Hamas terror group in Gaza in light of ongoing riots and violence along the Strip’s security fence.

Sirens wail across Beersheva as Red Alert is activated for an incoming rocket from #Gaza. #Israel pic.twitter.com/1NlCp2YIHq

“I’ve held a series of meetings with the head of the Southern Command, the head of the [Gaza] Division, the brigade commanders, the battalion commanders, also with soldiers. My impression is that they all have reached the understanding that the situation as it is today cannot continue,” Liberman said.

According to the defense minister’s assessment, a “serious blow” to Hamas would result in four to five years of calm along the Gaza border — akin to the quiet that persisted from the end of the 2014 Gaza war, known in Israel as Operation Protective Edge, until the start of the current round of clashes in late March, a few limited skirmishes notwithstanding.

Since March 30, Palestinians in the Gaza Strip have participated in a series of protests and riots dubbed the “Great March of Return,” which have mostly involved the burning of tires and rock-throwing along the security fence, but have also seen shooting attacks and bombings as well as the sending of incendiary balloons and kites into Israel.

There have also been several flareups that took Israel and Hamas to the brink of war, with Palestinians firing rockets into Israel and the IDF responding with airstrikes.

Some 155 Palestinians have been killed and thousands more have been injured in the clashes with IDF troops, according to AP figures; Hamas has acknowledged that dozens of the dead were its members. One Israeli soldier was shot dead by a sniper on the border. 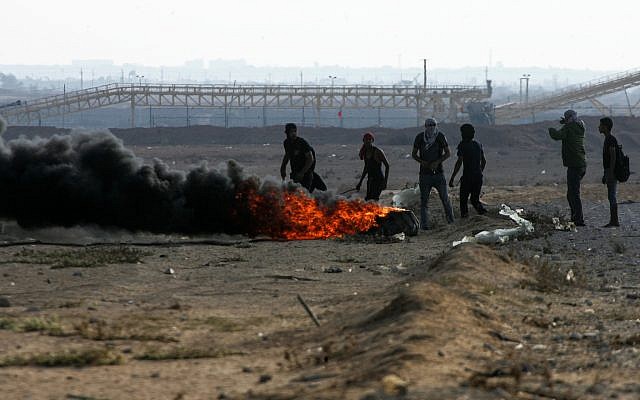 Palestinian demonstrators burn tires as they demonstrate during the “Great March of Return” on the Gaza-Israel border in Rafah, Gaza on October 12, 2018. (Abed Rahim Khatib/Flash90)

The riots began as weekly events, but in recent weeks — due to both an internal Palestinian conflict and failed indirect negotiations with Israel — the clashes have become a daily event.

The defense minister said the “straw that broke the camel’s back” and convinced him that a full-scale military action was necessary in Gaza was the rioting that took place along the border last Friday evening, after Israel allowed additional fuel into the Strip that had been purchased by Qatar.

“We have exhausted all other options in Gaza,” Liberman said during a visit to the IDF’s Gaza Division headquarters near the Strip.

“Now is the time to make decisions,” he added.

The security cabinet, which approves such military campaigns, met Sunday to discuss the possibility of an attack against Hamas, but ultimately decided to wait until the week’s end in order to give negotiators a chance to convince the group to abandon its current violent tactics.

On Wednesday, the cabinet was due to meet again, but the meeting was called off in the wake of the overnight rocket attack.

The Lagos State Government says it will start charging face mask defaulters to court from next week, as the period of grace...
View Post

President Muhammadu Buhari has condoled with government and people of Oyo State over the passing of  former governor, Isiaka Abiola Ajimobi, whose...
View Post
Coronavirus

Djokovic Has Tested Positive for COVID-19

Novak Djokovic, the men's world number one tennis player, has tested positive for COVID-19, the Serbian said in a statement on Tuesday.
View Post