Russian Official: If Iran Attacks Israel, We’ll Stand With You

Were Iran to attack Israel, Moscow would stand by the Jewish state’s side, a Russian official said this week, days after an Iranian-made drone infiltrated Israel from Syria and was shot down by the IDF.

Still, in a wide-ranging interview conducted at the Russian Embassy in Tel Aviv on Monday, Frolov cast doubt on Israel’s assertion that Iran was behind the drone incursion and suggested Israeli intelligence agencies establish contacts with its Syrian counterparts.

He also predicted that Israelis would not be happy about the forthcoming American peace plan, and dismissed the outrage against Palestinian Authority President Mahmoud Abbas’s condemnation of Israel as a European colonial project with no connection to Judaism.

“We certainly support Israel’s right to defend itself, and the actions of Israeli pilots were entirely correct,” he said of Saturday’s flareup in the north, during which an Israeli fighter jet was shot down by a Syrian anti-aircraft battery and two pilots were injured.

“We certainly regret that in this incident two Israeli pilots were injured,” Frolov said. “On behalf of the Russian embassy I am wishing a speedy recovery to the wounded pilots.”

On Saturday morning, an Israeli Apache helicopter shot down the unmanned aerial vehicle a minute and a half after it had entered Israeli airspace. In retaliation for the infiltration, the Israeli Air Force attacked several targets in Syria, severely damaging the regime’s air defense systems.

Russia is a staunch ally of both Iran and Syria, assisting both countries in their efforts to help the Syrian regime fend off rebels trying to bring down President Bashar Assad in a bloody seven-year civil war.

“Syria is a sovereign country and the Syrian people, too, have the right to self-defense,” Frolov said.

Israel has repeatedly vowed to do whatever it takes to prevent Iran’s efforts to entrench itself militarily in Syria. Jerusalem, which has reportedly attacked Iranian targets in Syria, and Moscow have established a so-called deconfliction mechanism to avoid clashes in the skies of the war-torn country.

Israel’s demand that Iran not be allowed to establish a strong military presence in Syria is “absolutely legitimate,” Frolov said.

Moscow agrees that Iranian forces must leave the country as soon as the bloody civil war ends and a new democratic government is established, he said. In the meantime, however, anti-regime rebels — or “terrorists,” as Frolov called them — are trying to destabilize Syria, prompting Assad to invite Iranian forces to help defeat them, he said. Russia is convinced that all foreign military personnel will leave the country once calm has been reestablished.

In seeking to prevent Iran’s entrenchment in Syria, Israel should “have established closer ties with Syrian secret services,” he added. “Israel is surrounded by many enemy states. But that doesn’t prevent the Israeli leadership from announcing that their secret services have contacts with counterparts from Saudi Arabia or Qatar, for instance.”

Part of the remains of the UAV the #Iranians tried to sneak into Israel. Not much left of it, similar to some parts of the #Syrian air defense array. pic.twitter.com/TqVr3vNPcu

Though he agreed that Israel was well within its rights to shoot done the drone, Frolov cast doubt on its assertion that Iran was behind the incursion. Rather, he suggested that anti-regime forces launched the drone in order to trigger an Israeli attack on the forces loyal to Assad.

“I am sure that every UAV that intrudes into Israeli airspace needs to be shot down. It would be even better to bring down the UAV [without destroying it] and to see who created it, to whom it belongs,” he said, speaking in Russian through an interpreter.

What would the Iranians gain from sending a UAV to Israel? After all, the Iranians know it would be shot down

“One can accuse the Iranians of many things, but they’re not stupid,” he went on. “They know what would happen if they sent a drone over to Israel. No one doubts that Israel has the capability to defeat Iranian military forces in Syria. But we don’t want to assume, without proof, that the Iranians in Syria are insane.”

The IDF stated unequivocally that the drone — a replica of the American RQ-170 — was built and piloted by Iranians troops stationed in Russia. US Ambassador to the UN Nikki Haley on Wednesday told the Security Council that “Iranian-backed militias” were behind the drone attack, which she described as an “egregious and unprompted escalation” and a “wake-up call for all of us.” 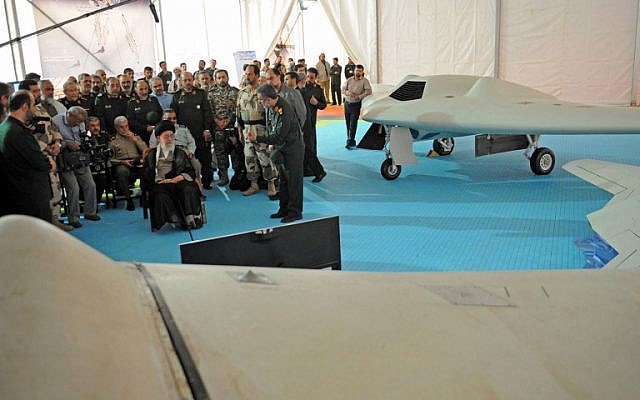 A photo released from the office of Iran’s Supreme Leader Khamenei on May 11, 2014 shows him (C-L) sitting next to acaptured US RQ-170 sentinel high-altitude reconnaissance and its locally made copy at the Islamic Revolutionary Guard Corps Aerospace Force exhibition in Tehran. (AFP/HO/Iranian Leader’s Website)

But Frolov, a soft spoken, gray-haired veteran diplomat who previously served in Tripoli and Ramallah, adamantly disagreed with the Israeli assertion, saying that the photos of the destroyed drone published in Israel in no way proved that Iran has behind Saturday’s launch.

“I don’t know who did it,” he said, adding that rebel groups are present in the location where the UAV was launched. “It would fit these gangs to make provocations in order for Israel to attack positions in Syria. We always need to ask ourselves who gains from this. What would the Iranians gain from sending a UAV into Israel? After all, the Iranians know it would be shut down and afterwards the Israelis would attack several targets in Syria.”

Jerusalem usually updates Moscow before launching strikes in Syria, and therefore it was unlikely that any Russians were hit by Israel’s attacks on Saturday, Frolov said.

Asked if Russia gives Israel the green light for those attacks, he replied, “I don’t think that Israel is the type of country that takes instructions or waits for green light from anyone.”

While it was natural for President Vladimir Putin to demand that Israel not harm Russian servicemen, Frolov denied reports that the Kremlin relayed any threats to Jerusalem over that matter. “This is not our modus operandi,” he said. 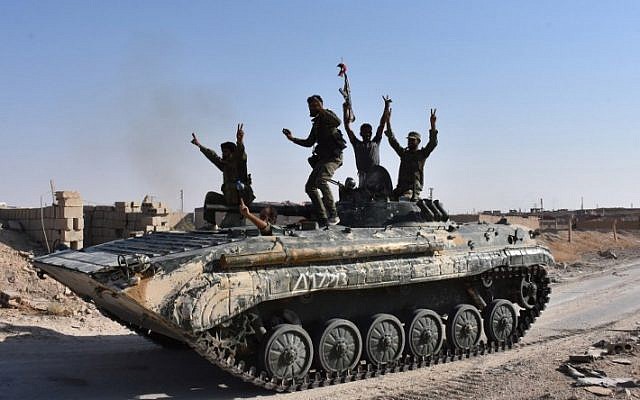 Syrian government forces celebrate in the eastern Syrian city of Deir Ezzor on September 11, 2017, as they continue to press forward with Russian air cover in the offensive against Islamic State terror group. (AFP Photo/George Ourfalian)

In the interview, granted to The Times of Israel on the occasion of Russian Diplomats Day last Saturday, Frolov also addressed at great length Kremlin’s position on the Israeli-Palestinian conflict.

The US administration’s recognition of Jerusalem as Israel’s capital “greatly disrupted the peace process,” he said, adding that he failed to understand why Israelis so jubilantly celebrated President Donald Trump’s December 6 declaration. Besides acknowledging the obvious — that Jerusalem is Israel’s capital — Trump also made plain that the final borders will be determined by negotiations between Israelis and Palestinians.

“You see in Trump’s declaration what you like. But the fact that the declaration disturbs the peace process doesn’t bother you. No one doubts that Israel’s capital will be in Jerusalem. We are simply saying that the Arab population that lives in the Palestinian territories also deserves a capital in this holy city,” he said.

No one in Israel applauded when Moscow recognized western Jerusalem as Israel’s capital in April of 2017, Frolov noted, adding that the Russian Embassy in Israel was considering hosting its June 12 Russia Day ceremony in the city.

Russia would like to play a more significant role in the peace process, Frolov said, acknowledging, however, that “without the US it’s impossible to reach agreements” between Israelis and Palestinians.

“We remember the French effort to launch a peace conference and we also remember how it ended,” he said referring to a January 2017 meeting in Paris, which concluded with little more than a joint statement calling for a two-state solution.

Moscow would actually like the US to take a more active approach to the Israeli-Palestinian conflict, Frolov said, noting that after a year of the administration talking about a peace proposal nobody has seen a draft.

“I don’t think that you will be as happy to see the proposal as you were happy to see the first sentence of Trump’s Jerusalem declaration,” he predicted, hinting that it may ask Israel for painful concessions.

Despite the Palestinians’ rejection of the US as a mediator with Israel, Abbas, who visited Moscow this week, does not seek to exclude the administration from the peace process, the Russian diplomat said. “He is simply looking for someone who will prevent President Trump from ruining the situation even more. [Abbas] is an intelligent man who knows the history [of the peace process] very well.” 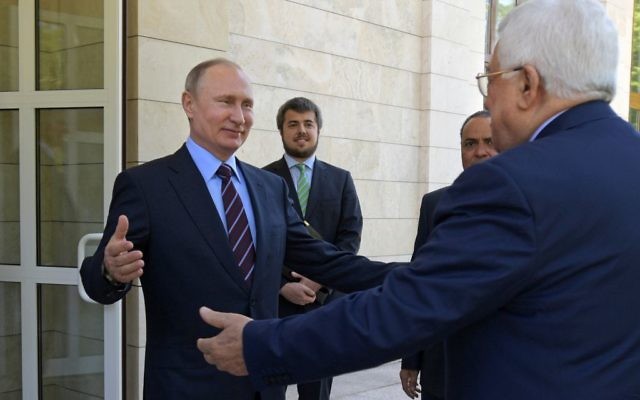 Frolov also played down the Palestinian leader’s controversial January 14 speech to the Palestine Liberation Organization’s Central Council in Ramallah, in which he claimed that the State of Israel is “a colonial project that has nothing to do with Judaism” to safeguard European interests.

“We’re not little children who get upset over statements made in anger and excitement,” Frolov said, adding that there are also Israelis who make outrageous and historically questionable statements.

As opposed to some Arab states that used to finance wars against Israel but now clandestinely cooperate with the Jewish state, the Palestinians have for some time now been ready to “live in good neighborly relations with Israel,” he said.