In Ijede, road block by men of the Nigeria police is an ugly phenomenon to worry about. Journeying there from to Ikorodu...
View Post

KIEV, Ukraine (AFP) — Ukraine was under fire Thursday after it admitted staging the murder of anti-Kremlin journalist Arkady Babchenko, despite relief in Russia and Ukraine that he was alive.

Babchenko made a shock reappearance at a press conference in Kiev on Wednesday, less than 24 hours after the Ukrainian authorities reported he had been shot dead at his home in a contract-style killing blamed on Russia.

Ukraine’s security services said his death was faked to foil an assassination plot by Moscow, but Russian officials reacted with anger to what they branded an “anti-Russian provocation.”

The operation fooled the world’s media and angered press freedom groups which raised fears about the impact it could have on the work of journalists around the globe. 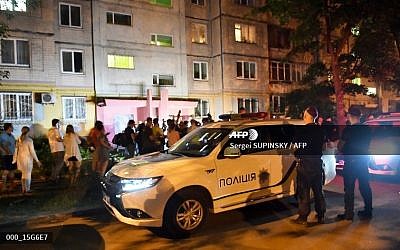 Journalists and neighbors gather at the entrance to the apartment building in which journalist Arkadi Babchenko was alleged to have been shot dead, May 29, 2018. (Sergei SUPINSKY / AFP)

“There can be no grounds for faking a journalist’s death,” the head of Reporters Without Borders Christophe Deloire said Wednesday, describing it as a “pathetic stunt.”

“The first question is to what extent were there no alternatives to saving Babchenko’s life in this way,” analyst Igor Yakovenko wrote on his blog, adding there would inevitably be consequences to the high-profile fakery.

An editorial in Russian daily Vedomosti argued the Babchenko operation “blurred the border between truth and fiction” and would lead to more distrust in the media.

Several Western commentators and reporters said it would be difficult to trust official statements from Ukraine again.

Babchenko, who told the press he had been preparing to stage his death with secret services for several weeks, dismissed the criticism.

“I wish all these moralizers could be in the same situation — let them show their adherence to the principles of their high morals and die proudly holding their heads high without misleading the media,” he wrote on Facebook.

Other commentators urged the media to focus on the fact that Babchenko is alive.

“The main thing is that the killing of a journalist was foiled, the organizers are caught and the journalist is alive,” said Russian political commentator Evgeny Roizman. 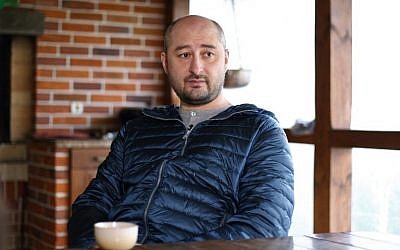 “Do not love an Arkady that is alive less than a dead one. In a hybrid war there are sometimes hybrid victims,” Russian journalist Boris Grozovsky wrote on Facebook.

Kiev itself sought to justify the fake death, which provoked an outpouring of grief and a diplomatic spat with its former masters in Moscow.

“Thanks to this operation, we were able to foil a cynical plot and document how the Russian security service was planning for this crime,” security service head Vasyl Grytsak said when he reintroduced Babchenko, alive and well, to the world.

Grytsak said the authorities had arrested the alleged mastermind of a plot against Babchenko, saying a Ukrainian citizen named only as G. had offered to pay a hitman to carry out the killing after being recruited by Russian special forces and paid $40,000.

Ukrainian President Petro Poroshenko later met Babchenko and wrote triumphantly on Facebook that “millions of people are celebrating” the journalist’s return to life.

Anton Gerashchenko, an adviser to Ukraine’s interior minister, likened the plot to a story from a crime novel, saying on Facebook that “Sherlock Holmes successfully used the method of staging his own death to efficiently solve complicated crimes.”

But Moscow condemned the staged murder, with the foreign ministry saying: “Now the true motives are beginning to be revealed for this staging, which is totally, obviously yet another anti-Russian provocation.”

At the press conference Grytsak thanked Babchenko and his family, which he said was in the loop about the secret operation.

The reporter, however, apologized to his wife for putting her through “this hell she had to live through for three days… but there was no other option.”

Babchenko, who has repeatedly said he faced death threats, vowed on Twitter to “die at 96 after dancing on Putin’s grave.”

“God, it got so boring being dead,” he wrote. “Good morning.” 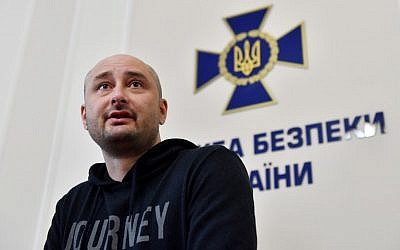 Anti-Kremlin Russian journalist Arkady Babchenko speaks during a press conference at the Ukrainian Security Service in Kiev on May 30, 2018. (AFP/Sergei Supinsky)

A number of Kremlin critics have been killed in Ukraine in recent years, with one gunned down on a Kiev street in broad daylight and another whose car exploded.

Babchenko fought in Russia’s two Chechen campaigns in the 1990s and early 2000s before becoming a war correspondent and author.

He has contributed to a number of media outlets including top opposition newspaper Novaya Gazeta and is an avid blogger, accusing Russian authorities of killing Kremlin critics and unleashing wars in Ukraine, Syria and elsewhere.

Babchenko left Russia in February 2017 after receiving threats, living first in the Czech Republic, then in Israel, before moving to Kiev.

In recent years his increasingly bombastic posts pushed the boundaries of good taste and some of his colleagues and followers stopped reading him on Facebook.

The United States of America has imposed more Visa restrictions on individuals responsible for undermining the democratic process in Nigeria.
View Post