GENEVA (AP) — The United States is about to quit the United Nation’s main human rights body, primarily over Washington’s claim that the Human Rights Council is biased against Israel, a Western and a US diplomat say.

The move would be the Trump administration’s latest snub of the international community. The US State Department said Friday no decision has been made to leave.

But diplomats who requested anonymity said it appears more a matter of when, not if, the pullout threatened last year by the US ambassador to the United Nations, Nikki Haley, will happen.

Never in the 12 years of the Human Rights Council, which is tasked with spotlighting and approving investigations of suspected rights abuses, has a serving member dropped out voluntarily. Seven years ago, in the midst of the Arab Spring, Moammar Gadhafi’s Libya was kicked out with the approval of the UN General Assembly, which has final say.

The 47-member council opens the second of its three annual sessions Monday, when UN human rights chief Zeid Ra’ad al-Hussein makes his last address to a regular meeting before stepping down in August. The United States could announce its decision as early as Tuesday, a US official said.

The official, who was not authorized to publicly discuss the matter and requested anonymity, said it was “all but decided” that the US will pull out.

US Secretary of State Mike Pompeo could opt for a full withdrawal from the council— the option preferred by Haley — or remain in the room as an observer, without the right to vote on the dozens of resolutions the human rights body considers each session. 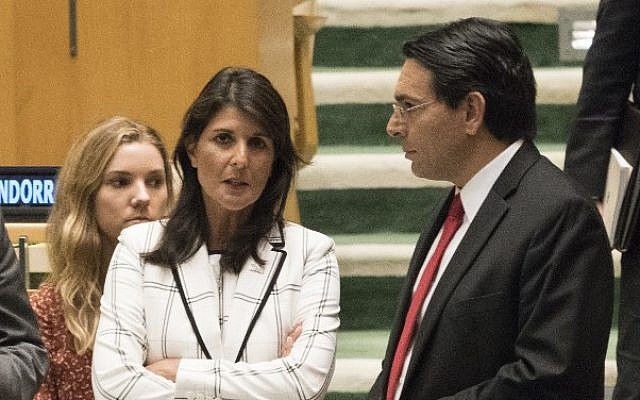 A Western diplomat said the US will leave the council despite the efforts of countries to keep it in, but that the timing of the move was “elastic.” The diplomat, speaking on condition of anonymity because discussions have been private, said Haley was the driving force behind the exit.

Diplomats and activists say the US has apparently given up on its efforts since Haley’s trip to Geneva a year ago to convince the council to end its systematic scrutiny of Israel’s alleged abuses against Palestinians.

Israel is the only country in the world whose rights record comes up for discussion at every council session, under “Item 7” on the agenda.

“As we have said numerous times, the UN Human Rights Council must be reformed to ensure it has the ability to realize its important mission,” the State Department said Friday.

“At its best, the HRC calls out human rights violators and encourages positive action. However, all too frequently it fails to address critical situations for political reasons — and undermines its own credibility,” it added.

A full pullout by the US would leave the council without one of its traditional defenders of human rights. In recent months, the United States has participated in attempts to pinpoint rights violations in places like South Sudan, Congo and Cambodia.

The US leaving also could ease pressure on China. At times singlehandedly, the US has been the main country willing to stand up against China, which has been flexing its diplomatic muscle and growing more assertive internationally — even as it intensifies a crackdown on rights defenders at home, rights groups say.

The “America First” Trump administration has already run afoul of the international community over its decisions to quit agreements like the Paris climate accord and the Iran nuclear deal, and to slap tariffs on steel and aluminum against key trading partners.

It previously withdrew the United States from the UN cultural and educational agency, UNESCO, and angered many with its decision to recognize Jerusalem as Israel’s capital, defying an international consensus. 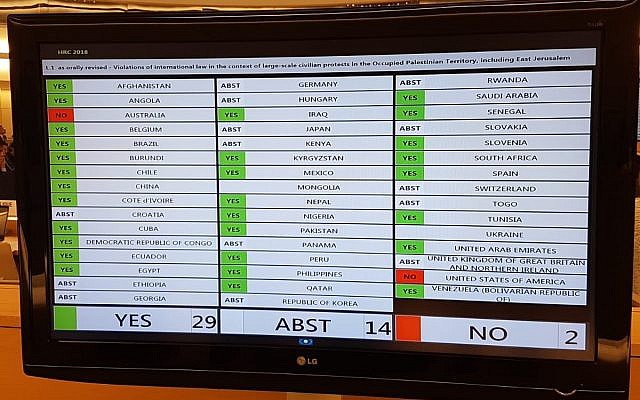 A television screen at the UN Human Rights Council shows how countries voted on a resolution approving an investigation into Israel’s handling of deadly clashes on the Gaza border, on May 18, 2018. (Foreign Ministry)

The United States has opted to stay out of the Human Rights Council before: the administration of President George W. Bush did so when the council was created in 2006. Item 7 on “Israel and the Occupied Palestinian Territories” has been part of the council’s regular business almost as long as it has existed.

Efforts by Haley and other American diplomats to end or to water down the routine scrutiny of Israel have failed in recent months at the UN General Assembly in New York.

During her visit to Geneva a year ago, Haley denounced the council as a “forum for politics, hypocrisy and evasion.” She accused member countries such as Venezuela, Cuba, China, Burundi and Saudi Arabia of failing to fulfill their duties to “uphold the highest standards” of human rights, while emphasizing what she said was the council’s anti-Israel bias.

Haley said then that the United States didn’t want to leave the council, but would do so if it did not change.

“It is up to any state to determine whether they would like to be a member of the council,” council President Vojislav Suc said Wednesday. “The US has been very active in the council in the previous years, including this year, with many initiatives.”

Suc said he had received no information to indicate that the United States was poised to pull out of the council, which he said benefits from the “continued constructive engagement of all delegations — including the United States.”

Human Rights Council spokesman Rolando Gomez said there have been “a lot of rumors and a lot of speculation” about a US pullout, but “we have no indication” that the US might not attend the three-week session that begins Monday.

A pullout could be largely symbolic: The United States’ current term on the council ends next year, when it could revert to the observer status held by other countries that are not members. In that situation, the US would be able to speak out on rights abuses, but not to vote.

A key question will be where a US pullout would leave Israel if its biggest and most powerful defender abandons its voting rights or drops out of the council altogether.

The State Department’s web site says protection of fundamental human rights was a “foundation stone” for the United States’ creation over two centuries ago and that promoting respect for human rights since has been a “central goal” of US foreign policy.