The United States will not provide $45 million that it had pledged last month to the UN Agency for Palestinian Refugees, Reuters reported a State Department spokesman as saying Thursday.

The money was meant for food aid as part of the West Bank/Gaza Emergency Appeal led by UNRWA last month.

The funds had originally been pledged by State Department Comptroller Eric Hembree in a December 15 letter to UNRWA Commissioner-General Pierre Krähenbühl, Reuters said.

“The United States plans to make this funding available to UNRWA in early 2018,” the letter said. “An additional letter and contribution package confirming this contribution will be sent by or before early January 2018.”

Explaining the decision to withhold the cash, State Department spokeswoman Heather Nauert told reporters Thursday that the $45 million was not a guarantee.

“Money coming in from other countries needs to increase as well to continue paying for all those refugees,” she said, adding that the UN agency needed to reform.

On Wednesday, Arab League chief Ahmed Aboul Gheit charged that the US decision to freeze the funding was aimed at wiping out the whole issue of Palestinian refugees.

“This decision affects the education and health of Palestinians and aims to eradicate the question of refugees,” Gheit said at a conference in Cairo about Jerusalem.

Washington is the largest contributor to the UN agency. 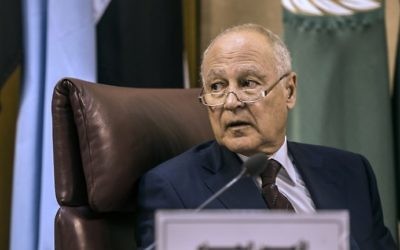 UNRWA spokesman Chris Gunness warned Wednesday that “this dramatically reduced contribution results in the most severe funding crisis in the history of the agency.”

Hanan Ashrawi, a senior member of the Palestine Liberation Organization, said the freeze amounted to “cruelty” toward an “innocent and vulnerable population.”

The Palestinian envoy to Washington, Husam Zomlot, said, “Palestinian refugees and children’s access to basic humanitarian services, such as food, health care and education, is not a bargaining chip but a US and international obligation.”

The UN’s aid agency for Palestinian refugees announced Wednesday the launch of an international fundraising campaign to make up the budget shortfall caused by the US decision. In a statement, UNRWA’s commissioner-general, Pierre Krahenbuhl, warned that “this reduced contribution threatens one of the most successful and innovative human development endeavors in the Middle East.” 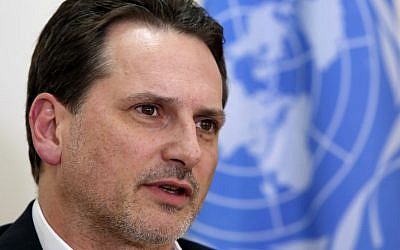 Pierre Krahenbuhl, director of the UN agency that supports Palestinians, during an interview in Beirut, Lebanon, March 12, 2015. (AP Photo/Bilal Hussein)

But Prime Minister Benjamin Netanyahu praised the move to reporters during his state visit to India, as “the first time that there is a challenge to UNRWA, after 70 years.

“The agency that perpetuates the Palestinian refugee problem and narrative of erasing Zionism — and this is the first time this thing is challenged. It’s a good thing that they’re moving forward and challenging this body.”

Netanyahu has urged that funding for Palestinian refugees be maintained, but not through UNRWA. Rather, he has called for it to be transferred through the UN’s main refugee body, UNHCR.

Israel accuses UNRWA of helping to perpetuate the Palestinian narrative of Israel’s illegitimacy by granting refugee status to the descendants of refugees, even when they are born in other countries and have citizenship there, conditions that do not apply to the refugees cared for by the UN’s main refugee agency, UNHCR, which cares for all other refugees worldwide. The population of Palestinian refugees thus grows each year, even as other refugee populations in the world shrink with each passing generation. 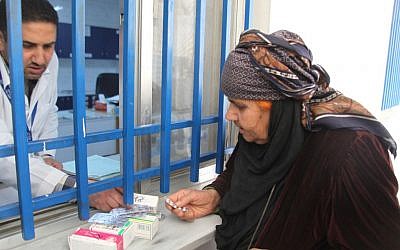 UNRWA counters that it is caring for a population that is scattered in several countries in the region, but is not served either by Israel or those countries, which refuse to grant most of them or their descendants citizenship, and that its definition of refugees reflects that reality.

The $65 million that the US State Department has withheld forms part of the $120 million it planned to contribute to UNRWA this month, one of several payments to the agency slated for 2018.

The US has told UNRWA that future US donations will be contingent on major changes by the organization.

“We would like to see some reforms be made,” Nauert said in a statement earlier this week, adding that changes were needed in the way the agency operates and is funded. “This is not aimed at punishing anyone,” she said, adding that the US believes there needs to be more “burden-sharing,” a regular complaint by Trump about multilateral organizations dependent on significant contributions of US cash. 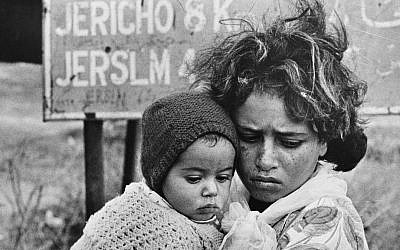 In this 1968 photo, Palestinian refugees have just arrived in Jordan as part of a continuing exodus of Palestinians from the West Bank and Gaza Strip.(AP/G.Nehmeh/UNRWA Photo Archives)

The agency was established following the Israeli War of Independence in 1948, in which more than 700,000 Palestinians either fled or were forced from their homes.

UNRWA provides aid for those people and their descendants, now numbering around five million Palestinians across the Middle East.