WASHINGTON (AP) — US Ambassador to the UN Nikki Haley has indicated new economic sanctions will be announced Monday against Russia for enabling the government of Syrian leader Bashar Assad to continue using chemical weapons.

The ambassador said Russia has blocked six attempts by the UN Security Council to make it easier to investigate the use of chemical weapons.

“Everyone is going to feel it at this point,” Haley said, warning of consequences for Assad’s foreign allies.

“The international community will not allow chemical weapons to come back into our everyday life,” she said in an interview aired Sunday on US media. “The fact he was making this more normal and that Russia was covering this up, all that has got to stop.”

US President Donald Trump on Sunday said a US-led missile attack on Syria’s chemical weapons program was “perfectly carried out.”

Trump tweeted “Mission Accomplished” on Saturday after US, French and British warplanes and ships launched more than 100 missiles nearly unopposed by Syrian air defenses. While he declared success, the Pentagon said the pummeling of three chemical-related facilities left enough others intact to enable the Assad government to use banned weapons against civilians if it chooses. 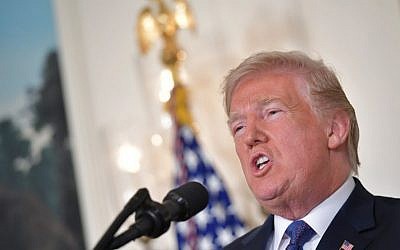 US President Donald Trump addresses the nation on the situation in Syria April 13, 2018 at the White House in Washington, DC. Trump said strikes on Syria are under way. (AFP PHOTO / Mandel NGAN)

His choice of words recalled a similar claim associated with President George W. Bush following the US-led invasion of Iraq. Bush addressed sailors aboard a Navy ship in May 2003 alongside a “Mission Accomplished” banner, just weeks before it became apparent that Iraqis had organized an insurgency that would tie down US forces for years.

Later Sunday, Trump sent a letter to congressional leaders informing them in writing of his decision to order the strike. Under the War Powers Resolution, the president must keep Congress informed of such actions.

Haley made clear the United States won’t be pulling troops out of Syria right away, saying US involvement there “is not done.”

Haley said the three US goals for accomplishing its mission are making sure chemical weapons are not used in a way that could harm US national interests, defeating the Islamic State group and having a good vantage point to watch what Iran is doing.

“We’re not going to leave until we know we’ve accomplished those things,” she said. 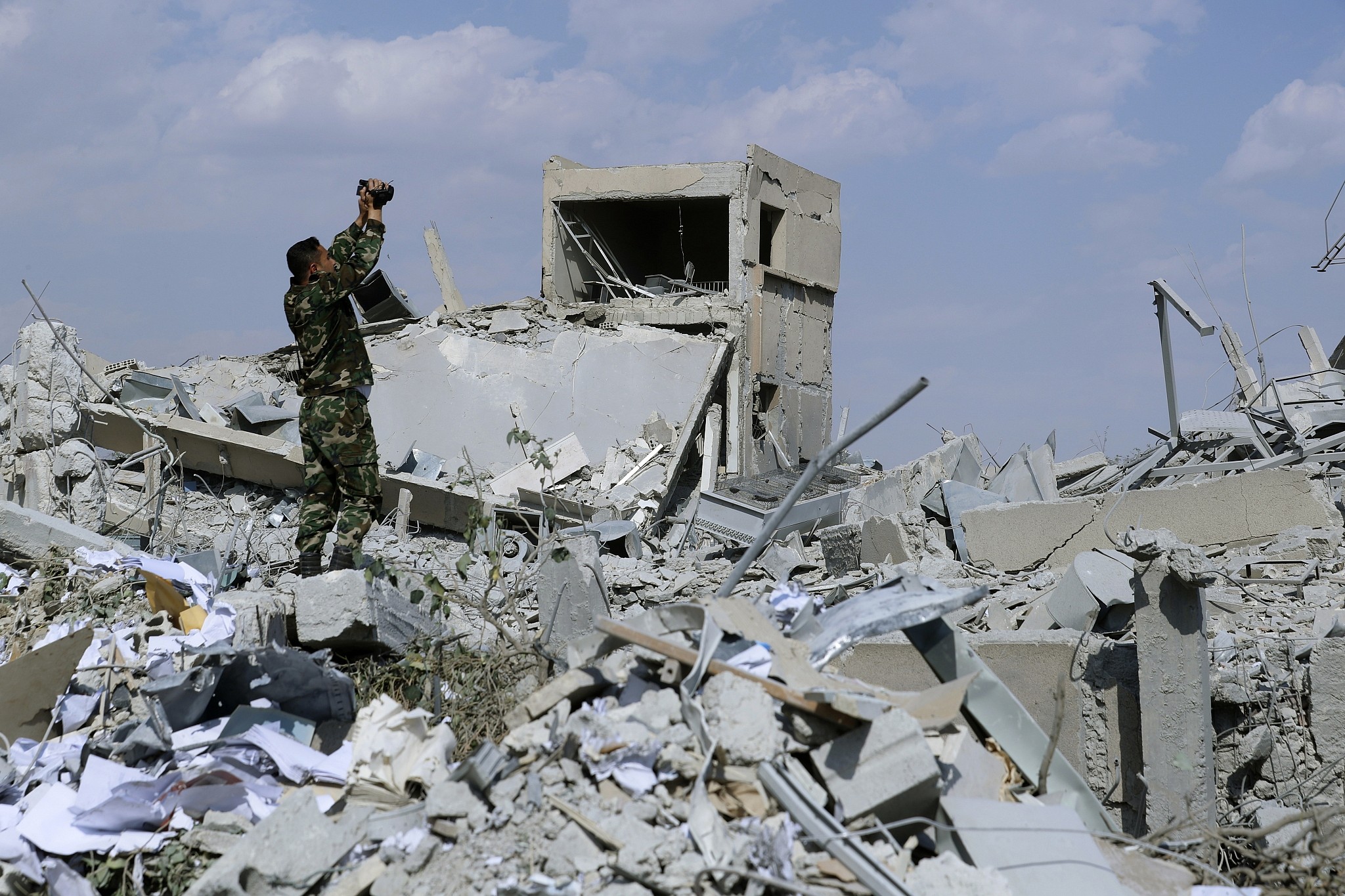 A Syrian soldier films the damage of the Syrian Scientific Research Center which was attacked by US, British and French military strikes, in Barzeh, near Damascus, Syria, April 14, 2018. (AP Photo/Hassan Ammar)

Haley said the joint military strike “put a heavy blow into their chemical weapons program, setting them back years” and reiterated that if Assad uses poison gas again, “the United States is locked and loaded.”

French President Emmanuel Macron said Sunday that France wants to launch a diplomatic initiative over Syria that would include Western powers, Russia and Turkey. Speaking on French television BFM and online site Mediapart, Macron stressed that the French diplomacy is able to talk with Iran, Russia and Turkey on one side and to the United States on the other side.

He said, “Ten days ago, President Trump wanted to withdraw from Syria. We convinced him to remain.”

Asked about Macron’s comments, White House spokeswoman Sarah Huckabee Sanders stressed that Trump’s plans for the region have not changed. In a statement, she said: “The US mission has not changed — the President has been clear that he wants US forces to come home as quickly as possible.”

The nighttime assault on Syria was said to be carefully limited to minimize civilian casualties and avoid direct conflict with Russia, but confusion arose over the extent to which Washington warned Moscow in advance. The Pentagon said it gave no explicit warning. The US ambassador in Moscow, John Huntsman, said in a video, “Before we took action, the United States communicated with” Russia to “reduce the danger of any Russian or civilian casualties.” 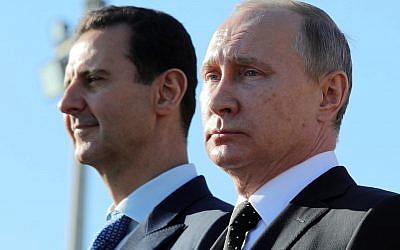 Russia has military forces, including air defenses, in several areas of Syria to support Assad in his long war against anti-government rebels.

Assad denies he has used chemical weapons, and the Trump administration has yet to present hard evidence of what it says precipitated the allied missiles attack: a chlorine gas attack on civilians in Douma on April 7. The US says it suspects that sarin gas also was used.

The strikes “successfully hit every target,” said Dana W. White, the chief Pentagon spokeswoman. The military said there were three targets: the Barzeh chemical weapons research and development site in the Damascus area, a chemical weapons storage facility near Homs and a chemical weapons “bunker” a few miles from the second target.

Although officials said the singular target was Assad’s chemical weapons capability, his air force, including helicopters he allegedly has used to drop chemical weapons on civilians, were spared. In a US military action a year ago in response to a sarin gas attack, missiles took out nearly 20 percent of the Syrian air force, the Pentagon said.

In his televised address from the White House on Friday, Trump said the US was prepared to keep up the economic, diplomatic and military pressure on Assad until he ends a pattern of killing his own people with internationally banned chemical weapons.

That did not mean military strikes would continue. In fact, Gen. Joseph Dunford, chairman of the Joint Chiefs of Staff, said no additional attacks were planned.

Asked about Trump’s “Mission Accomplished” assertion, White said it pointed to the successful targeting of the three Syrian chemical weapons sites. What happens next, she said, is up to Assad and to his Russian and Iranian allies.