The predictions are welcome news, but won’t be enough to offset the severe deficit in Israel’s freshwater streams, lakes and aquifers, the state’s official water supply and planning agency said in a statement on Monday.

“The aggregate shortage over the past five years of drought is enormous,” the statement read. “The natural water sources lack some 2.5 billion cubic meters (660 billion gallons) of water. We need an unusually powerful winter to make up these shortages.”

The extended drought has driven these natural reservoirs, and the streams that flow from them, to 98-year lows, according to Water Authority data.

The authority launched a public awareness campaign in May entitled “Israel is drying out… again,” which aimed to urge Israelis to conserve their water usage.

Israelis have not felt the current drought as acutely as past dry spells, or as sharply as Israel’s neighbors, because of the construction in recent years of five massive desalination plants on the Mediterranean coast that now provide some 70 percent of the country’s drinking water directly from the sea. The state also recycles some 86% of its wastewater for agriculture.

The authority urged “everyone to [use water] more efficiently and not to waste.” Meanwhile, infrastructure work was continuing that would bring desalinated ocean water to larger parts of the country. Plans are also in the works to establish two new and larger desalination plants on the Mediterranean coast alongside the five operating plants.

Climate change is a key factor in a 20 percent decline in natural water supplies in the country over the past 30 years, Israeli water officials believe. “We see this in the dramatic decline in the flow in streams and rivers, and elsewhere,” the statement said.

A recent poll by the Water Authority found that 91% of Israelis say they are actively working to conserve water in response to the authority’s television ads. A similar 92% say they are convinced by the ads that the shortage is real and requires cuts to their water usage.

There is no data yet available on the actual change in water usage in the past few months.

Last month, the Water Authority warned that the country was on the cusp of a sixth year of drought, with Israel’s lakes, riverbeds and aquifers already at unprecedented 100-year lows and the Sea of Galilee dangerously close to its “black line,” the level below the intake pipes of the water pumps that send the lake’s water to nearby towns.

The Sea of Galilee is Israel’s largest natural water source, and was already 214.2 meters (703 feet) below sea level by August, 80 centimeters lower than at the launch of the ad campaign some five months ago. That placed it over a meter below the danger zone of the lower red line. In 2001, the Sea of Galilee was at an even lower level, 214.87 meters (705 feet) below sea level. 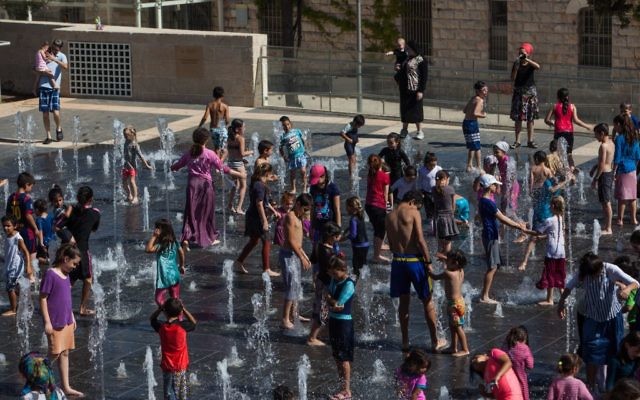 Children play in the fountains at Teddy Kollek Park in Jerusalem on July 26, 2016 (Zack Wajsgras/Flash90)

The “black line” is a dangerously low level that can create irreversible ecological problems, including an increase in the water’s salinity and algae blooms that can do permanent damage to the water quality, and to flora and fauna. Last year, the Water Authority had to pump 17,000 tons of salt out of the Sea of Galilee to ensure that the lower water levels didn’t cause dangerously high levels of salinity.

Officials now fear Israel’s major freshwater lake could drop as much as another centimeter per day before the first rains come in the fall, removing the Sea of Galilee from the water supply and causing serious ecological damage in the area. There are plans underway in the Water Authority to pump water into the Sea of Galilee from springs and other sources nearby.

The fall in water level in recent months has created a new island in the Sea of Galilee, off the coast of Kibbutz Maagan. According to forecasts, the island may yet connect to the mainland.

In July, researchers who monitored nearly 200,000 people in Israel found that those who were drinking desalinated water showed an increased risk of heart disease as compared to those consuming natural water.

In a report published last month in the Environmental Research scientific journal, researchers wrote that over a period of six years, 178,000 people from the Clalit Health Services, the largest healthcare provider in Israel, were monitored based on the type of water they drank. Half of the people studied were in areas supplied with desalinated water, while the rest were from communities using natural water.

They found a six percent increase in the incidence of heart disease among those drinking desalinated water, according to a Hadashot television news report about the study. Some researchers even estimated the figure could be as high as 10%.

Scientists say the desalination process purifies the water, removing some naturally occurring minerals that the body usually gets from naturally sourced water. These minerals may soon be added to the desalinated water before it is pumped into homes.