Why Democrats and Republicans Are Fighting Over The Jerusalem Embassy Bash

WASHINGTON (JTA) — A fight over who was and wasn’t invited to the US Embassy dedication in Jerusalem in May is becoming yet another battle in the war between Republicans and Democrats over Israel.

Top Jewish Democrats in Congress are suggesting the embassy bash was rigged to keep them out and make them look weak on Israel. David Friedman, the US ambassador to Israel, says that Democrats could have come if they wanted and if their party looks weak on Israel, it’s because, well, it is.

Israel and its supporters have long insisted that Israel remain a bipartisan issue, although that cardinal principle has taken a beating in recent years. Moving the embassy to Jerusalem, a move resisted by US President Donald Trump’s Republican and Democratic predecessors, was bound to be divisive. The dispute over the guest list has shown the administration to be more than happy to politicize support for Israel and put the Democrats on the defensive.

Days before the May 14 opening, the White House announced that the US delegation to the ceremony would include a relatively short list of six: Deputy Secretary of State John Sullivan would lead a celebration that included Friedman; Treasury Secretary Steve Mnuchin; Ivanka Trump, President Donald Trump’s daughter and adviser; Jared Kushner, his son-in-law and adviser; and Jason Greenblatt, Trump’s top Middle East negotiator. All but Sullivan are Jewish. 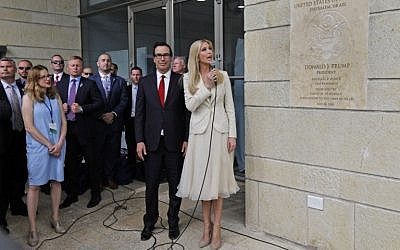 US Treasury Secretary Steve Mnuchin and US President Donald Trump’s daughter and adviser Ivanka Trump unveil the inauguration plaque during the opening of the US Embassy in Jerusalem, May 14, 2018. (AFP/Menahem Kahana)

Also attending were 10 Republicans from the House Armed Services Committee and four Republican senators, who went of their own volition. All the senators are known for their closeness to the positions of Israeli Prime Minister Benjamin Netanyahu: Ted Cruz of Texas, Lindsey Graham of South Carolina, Dean Heller of Nevada, and Mike Lee of Utah. Florida Gov. Rick Scott, who is running for the Republican nod for Senate in his state, was there, too.

Who was and wasn’t on hand quickly became political thanks to Cruz, who was quoted by The Times of Israel as saying on the morning of the event, “I don’t know why the Democrats will not be here, chose not to come. Every member of Congress had the option before them to come and be here. There was no way on earth we could have inaugurated this embassy without my being here to celebrate it. It’s too important.”

Friedman subsequently told Axios a week later, on May 23, that he would have been glad to assist any Congress member who wanted to come. 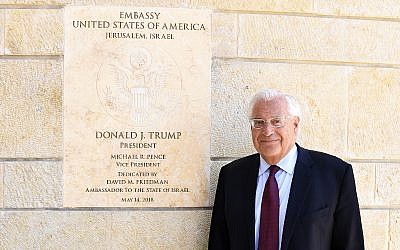 US Ambassador to Israel David Friedman at the US Embassy, Jerusalem, May 30, 2018 (Matty Stern, US Embassy Jerusalem)

“We would have been delighted to host as many Democratic congressmen and senators as would have come,” he said, adding that the absence of Democrats “concerned” him. “The invitation was open to all, or I should actually say we made it clear that everybody was welcome. We didn’t specifically invite anyone. The Republican congressmen and senators who came, did not come on the basis of a specific invitation. They reached out and they came.”

A spokeswoman for Republican Rep. Joe Wilson of South Carolina, who organized the House trip, said his office reached out to 50 or 60 Democrats, but — according to the spokeswoman — many appeared to have legitimate conflicts. One reliably pro-Israel Jewish Democrat, Jerrold Nadler, told Jewish Insider on Thursday that he did not hear from Wilson.

Six Democrats did make an issue of it in a May 28 letter to Friedman first obtained by Jewish Insider. Four are Jewish members of the House of Representatives and leaders in their party’s pro-Israel wing: Eliot Engel of New York, the ranking Democrat on the House Foreign Affairs Committee; Ted Deutch of Florida, the senior Democrat on its Middle East subcommittee; Brad Sherman of California; and Brad Schneider of Illinois. All six have backed moving the embassy to Jerusalem. (The other two signatories were Reps. Albio Sires of New Jersey and Thomas Suozzi of New York.) 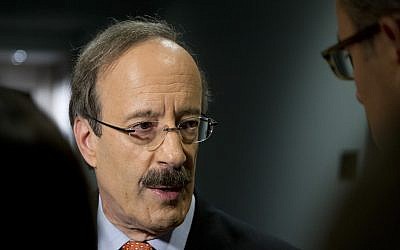 Their argument was that the White House should have — as other administrations have done before when planning Israel outings — assembled a delegation that included Congress members from both parties.

“On many previous occasions of importance to the United States and Israel, such as funerals or other national ceremonies, the White House has organized bipartisan participation of members of Congress,” they said.

Republicans lashed out, saying the letter was disingenuous.

“Rep. Wilson and Sen. Lindsey Graham, who organized the Senate [congressional delegation], made every effort to make the delegations bipartisan,” the Republican Jewish Coalition’s director, Matt Brooks, said in a statement. “Both have stated publicly that they wanted the delegations to be bipartisan in order to represent the traditionally bipartisan American support for Israel, but they were rebuffed by the Democrats that they reached out to.”

Nadler, in his Jewish Insider interview, said that going at Wilson’s behest would have been impracticable and against protocol, even if he had received the invitation. Traditionally such a request “goes through the Speaker’s office and the Minority Leader’s office, and somebody decides how big the delegation will be,” he said. Additionally, Nadler said, an ad hoc delegation would not have been guaranteed security clearance. 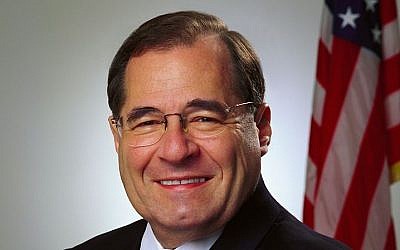 Engel, in an email to JTA, doubled down on his argument that protocol was not followed.

“The Administration planned this event,” he said. “If the White House wanted a bipartisan delegation, it would have been bipartisan. There would have been serious outreach to Democrats and Democrats would have attended. That didn’t happen. Saying after the fact ‘everyone was invited’ doesn’t cut it. I have worked for 30 years to make sure support for Israel is bipartisan, and I’ll continue to do so.”

Deutch separately has said that he did reach out to the administration for an invitation.

“Congressman Deutch spoke personally with officials at the White House,” a spokesman said in an email, and was told there were no invitations to members of Congress. 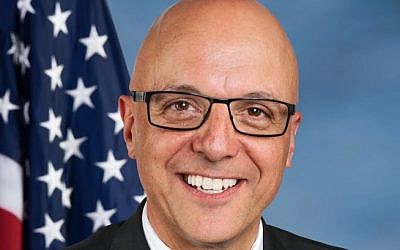 “If Congressman Deutch was invited on the White House delegation, YES he would have attended,” the email said.

Contradictions appear to be packed into the competing claims: Despite Friedman’s insistence that Congress members should have understood it was open house, previous administrations had been careful to issue formal invitations to lawmakers from both parties on previous visits to Israel: Bill Clinton attending the funeral for Yitzhak Rabin in 1995; George W. Bush attending Israel’s 60th anniversary in 2008; Barack Obama’s 2013 visit and his attendance at the funeral for Shimon Peres in 2016.

On the other hand, Nadler’s concerns about protocol and security are belied by the fact that Wilson, Cruz and others attended the event.

Friedman criticized the Democrats who complained about not being invited in an interview he gave Thursday to The Times of Israel, saying that Democrats should have called him instead of going public with their complaints.

“Where I come from, you want to accomplish something, you pick up the phone and you call,” he said. “You don’t write a letter to somebody and then publish it in the newspaper before they even have a chance to respond. I don’t do business that way.”

It’s not clear who leaked the letter to Jewish Insider.

Friedman didn’t appear interested in tamping down the partisan nature of the dispute.

“The argument I hear from some Democrats — that Republicans are seizing the pro-Israel mantle — is true, to a certain extent,” he said. “There’s no question Republicans support Israel more than Democrats. What the Democrats are not doing is looking at themselves critically and acknowledging the fact that they have not been able to create support within their constituency for Israel at the same levels that the Republicans have.”

It’s a credible argument and well articulated — were it made by a Republican or an analyst. Critics pointed out that Friedman is an ambassador with whom government officials of both parties are supposed to be comfortable. (He noted in the same interview that in March, he helped organize a successful visit led by House Minority Leader Rep. Nancy Pelosi, D-Calif.)

“It is truly unprecedented for a sitting US ambassador to Israel to engage in explicitly partisan rhetoric and behavior,” Ron Klein, the chairman of the Jewish Democratic Council of America, said in a statement. “Ambassador Friedman must remember that he is not the head of the Republican National Committee or the Republican Jewish Coalition political organization. He is the US ambassador, as confirmed by the US Senate, to represent all Americans in Israel — not just those of one party, or those who share his political views.”