THOUSAND OAKS, California — Authorities have identified the suspect in a mass shooting at a Southern California bar as 28-year-old Ian David Long.

Ventura County Sheriff Geoff Dean said Long is believed to have killed himself late Wednesday at the Borderline Bar and Grill in the city of Thousand Oaks.

Dean said his department had several previous contacts with the former Marine including a call to his home in April, when deputies found him acting irate and irrationally.

The sheriff said a mental health crisis team was called at that time and concluded that Long did not need to be taken into custody.

Dean said the other prior encounters were a traffic accident and an incident when he was the victim of a battery at a bar.

Long was found dead in the Borderline Bar and Grill after 12 people were shot to death late Wednesday.

Using a smoke bomb and a handgun, a hooded gunman dressed all in black opened fire during “college night” at a country music bar in Southern California, killing 12 people and sending hundreds fleeing in terror, authorities said Thursday. The gunman was later found dead.

Patrons screamed in fear, shouted “Get down!” and used barstools to smash second-floor windows and jump to safety as gunfire erupted at the Borderline Bar & Grill, a popular hangout for college students. The dead included 11 people inside the bar and a sheriff’s sergeant who was the first officer inside the door, Ventura County Sheriff Geoff Dean said.

“It’s a horrific scene in there,” Dean said in the parking lot. “There’s blood everywhere.”

A law enforcement official told The Associated Press that the gunman man deployed a smoke device and used a .45-caliber handgun. The official was not authorized to discuss the investigation publicly and spoke on condition of anonymity. 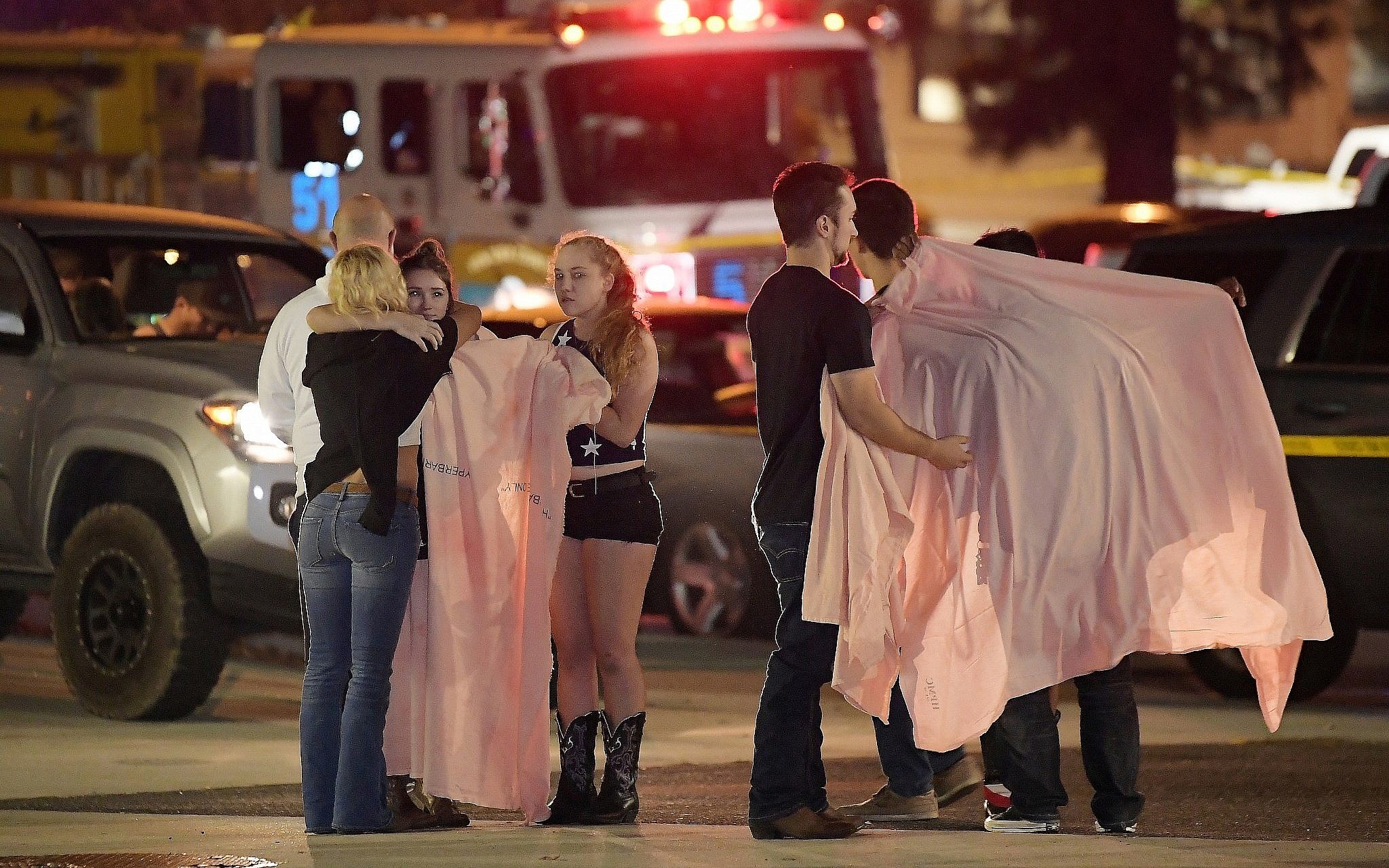 People comfort each other as they stand near the scene on November 8, 2018, in Thousand Oaks, California. (AP Photo/Mark J. Terrill)

The massacre was the deadliest mass shooting in the US since 17 students and teachers were slain at a Parkland, Florida, high school nine months ago. It also came less than two weeks after a gunman killed 11 people at a synagogue in Pittsburgh. That, it turn, closely followed the series of pipe bombs mailed to critics of US President Donald Trump.

Trump praised police for their “great bravery” in the California attack and said, “God bless all of the victims and families of the victims.”

The gunman was tall and wearing all black with a hood and his face partly covered, witnesses told TV stations. He first fired on a person working the door, then appeared to shoot at random at people inside, they said.

Sheriff’s Sgt. Ron Helus and a passing highway patrolman were responding to several 911 calls when they arrived at the Borderline at about 11:20 p.m., the sheriff said. They heard gunfire and went inside.

Helus was immediately hit with multiple gunshots, Dean said. The highway patrolman pulled Helus out, then waited as a SWAT team and scores more officers arrived. Helus died early Thursday at a hospital.

By the time they entered the bar again, the gunfire had stopped, according to the sheriff. They found 12 people dead inside, including the gunman. It was not immediately clear how the gunman died, Dean said.

The shooting happened on college night. Two-step lessons in country dancing were being offered Wednesday at the Borderline, according to its website.

The bar, which includes a large dance hall with a stage and a pool room along with several smaller areas for eating and drinking, is popular with students from nearby California Lutheran University who enjoy country music. It is also close to several other universities, including California State University Channel Islands in Camarillo, Pepperdine University in Malibu and Moorpark College in Moorpark. 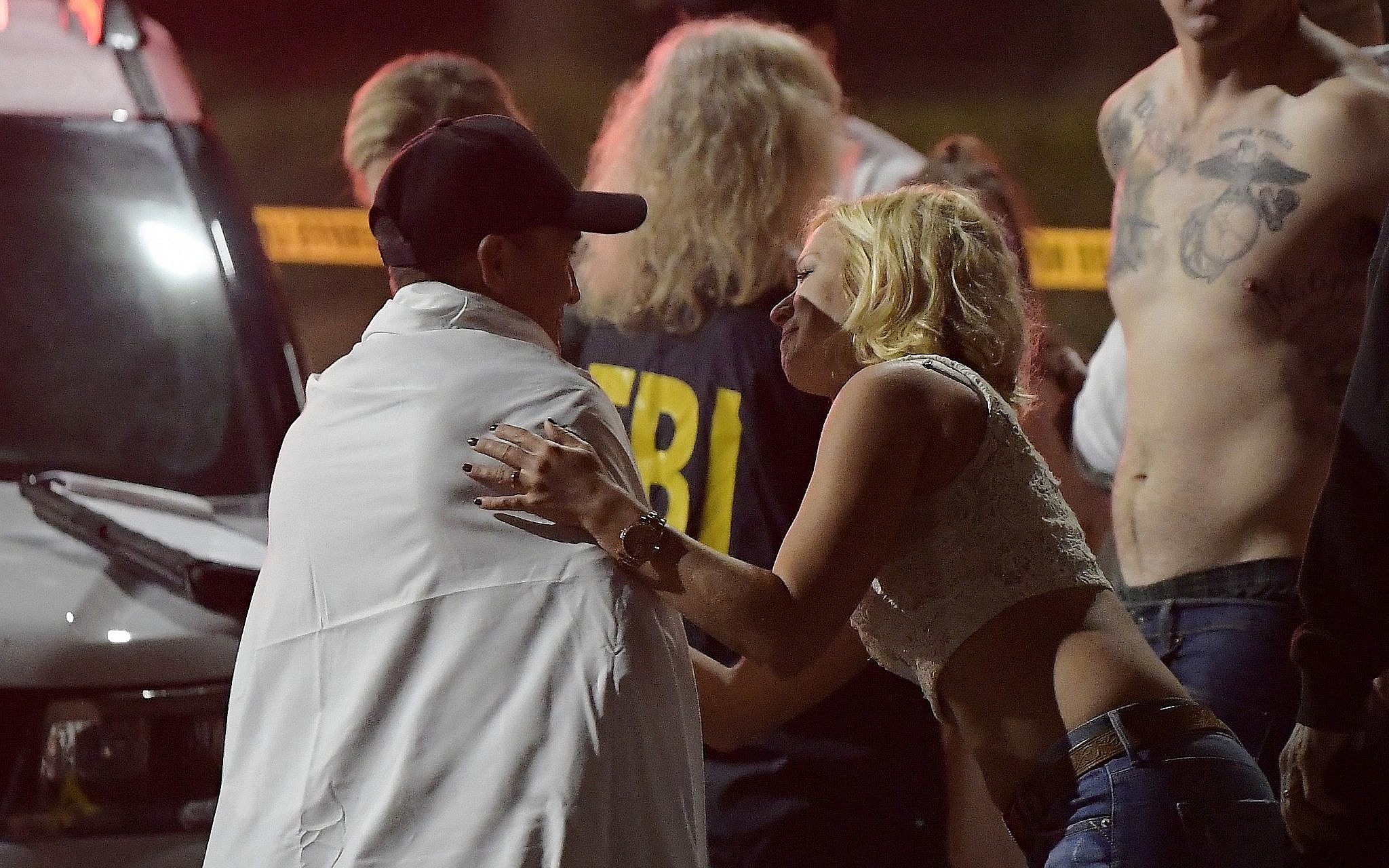 People comfort each other as they stand near the scene on November 8, 2018, in Thousand Oaks, California, where a gunman opened fire inside a country dance bar crowded with hundreds of people on “college night,” wounding 11 people including a deputy who rushed to the scene. (AP Photo/Mark J. Terrill)

Nick Steinwender, a Cal Lutheran student body president, told KTLA-TV he immediately started receiving messages about the shooting, and he and his roommate went to the scene to offer rides back to campus or moral support.

“It’s going to be a very somber day,” Steinwender said. “I know we don’t have all the details in yet, but you know, it just feels like it’s an attack on our community. You know, I think it’s going to be something that we’re going to have to come together and move past.”

When the gunman entered, people screamed and fled to all corners of the bar, and a few threw barstools through the windows and helped dozens to escape, witnesses said.

Video accessed by the AP showed law enforcement officers and vehicles speeding to the scene and people running from bar. Rapid-fire gunshots could be heard as officers crouched down behind a police vehicle, weapons drawn. Three people were seen carrying someone, and later paramedics applied bandages to the man, who has blood on his back.

Cole Knapp, a freshman at Moorpark College, said he was inside the bar when the shooting began, but he thought at first that it was “just someone with an M-80, just kind of playing a prank.” Then he said he saw the gunman, wearing a black beanie and black hoodie and holding a handgun.

“I tried to get as many people to cover as I could,” Knapp said. “There was an exit right next to me, so I went through that. That exit leads to a patio where people smoke. People out there didn’t really know what was going on. There’s a fence right there so I said, ‘Everyone get over the fence as quickly as you can,’ and I followed them over.”

He said a highway patrol officer was nearby who just happened to be pulling someone over.

“I screamed to him, ‘There’s a shooter in there!’ He was kind of in disbelief, then saw that I was serious,” Knapp said. He said he had friends who hadn’t been accounted for. 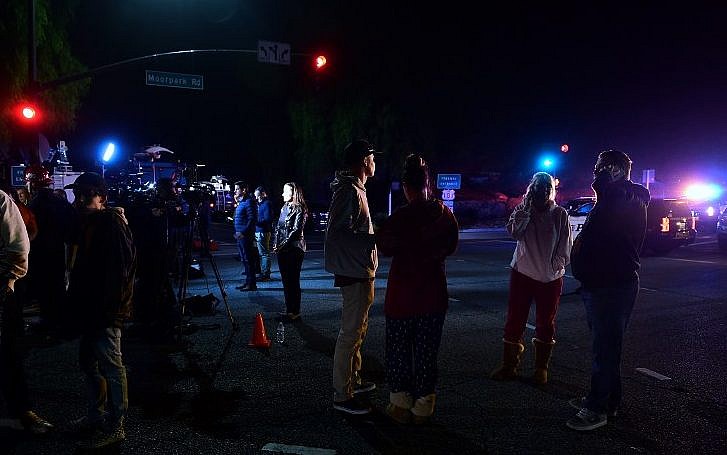 People stand and watch as the scene unfurls from the intersection of US 101 freeway and the Moorpark Rad exit as police vehicles close off the area outside a country music bar and dance hall in Thousand Oaks, west of Los Angeles, where a gunman opened fire late November 7, 2018, killing at least 12 people, US police said. (Photo by Frederic J. BROWN / AFP)

Tayler Whitler, 19, said she was on the dance floor with her friends nearby when she saw the gunman shooting and heard screams to “Get down!”

“It was really, really, really shocking,” Whitler told KABC-TV as she stood with her father in the parking lot. “It looked like he knew what he was doing.”

Sarah Rose DeSon told ABC’s “Good Morning America” that she saw the shooter draw his gun. “I dropped to the floor,” she said. “A friend yelled ‘Everybody down!’ We were hiding behind tables trying to keep ourselves covered.”

Shootings of any kind are very rare in Thousand Oaks, a city of about 130,000 people about 40 miles (64 kilometers) west of Los Angeles, just across the county line.

Helus was a 29-year veteran of the force with a wife and son and planned to retire in the coming year, said the sheriff, who choked back tears as he talked about the sergeant who was also his longtime friend.

“Ron was a hardworking, dedicated sheriff’s sergeant who was totally committed,” Dean said, “and tonight, as I told his wife, he died a hero because he went in to save lives.”