Intersections across Israel were blocked Tuesday morning as thousands of women went on strike to protest what they say is authorities’ failure to stem a sharp increase in violence against women, with marches and other demonstrations planned for the day.

Around 200 protesters blocked traffic at Tel Aviv’s Azrieli interchange, a major intersection near the Defense Ministry headquarters, with opposition politicians in attendance.

Speaking to the Hadashot news outlet, opposition leader Tzipi Livni called on authorities to take action, saying the government should dust off an existing program.

“There is a plan,” she said. “The government just needs to take it off the shelf and implement it.” 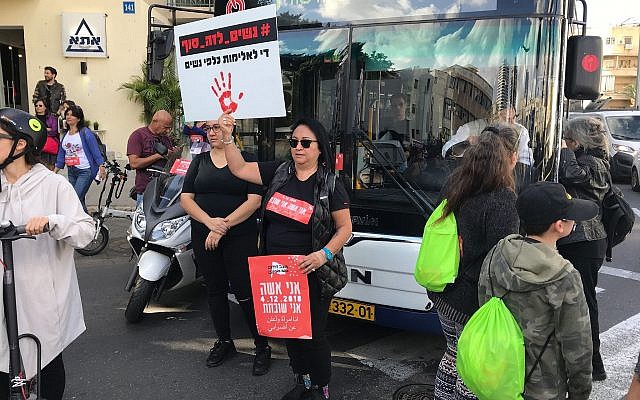 Organizers called the strike last week in the wake of the murders of two teen girls, whose deaths brought the number of women killed in the last year in domestic violence-related incidents to 24, the highest in years. The strike was initiated by a group called “I’m a Woman, I’m Striking” and a “Red Flag coalition” made up of dozens of women’s groups.

Hundreds of institutions, municipalities, schools, and organizations are allowing their employees to strike, and the government’s civil service commissioner has also made concessions to allow participation in the labor action.

At 10 a.m., a 24-minute period of silence was observed in memory of the 24 women killed by a partner, family member or someone they knew in the last year. 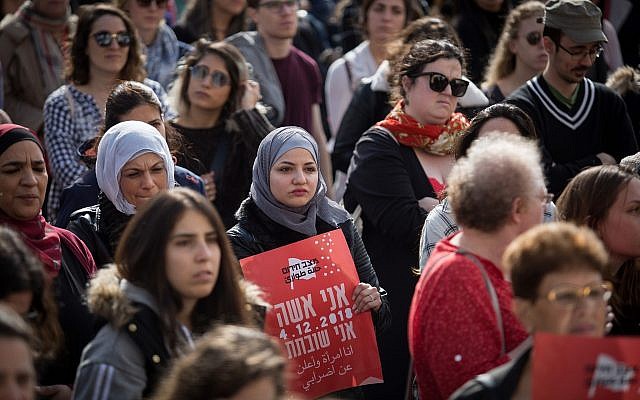 Women shout slogans and holding signs at Safra Square in Jerusalem as they protest against violence against women, December 4, 2018 (Hadas Parush/Flash90)

Aside from the Azrieli protest, demonstrations in Tel Aviv also took place at the intersection of Rokach Boulevard and the Namir highway in the north of the city at 12 p.m, and at the city’s central Dizengoff Square. Police warned drivers to expect delays in those areas.

Around 1,000 students demonstrated at Tel Aviv University, and classes were suspended for an hour. 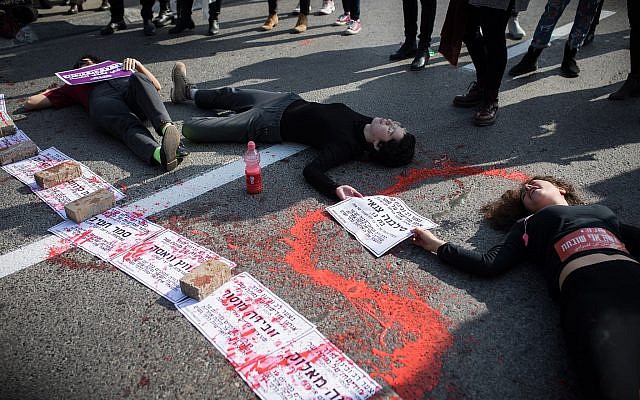 In Jerusalem, around 50 women blocked the entrance to the city, holding signs stating, “Enough with the murder of women,” the Ynet news site reported, with a demonstration due to take place in the city’s Safra Park at 12 p.m.

President Reuven Rivlin lent his support to the protest, tweeting photos of his wife, first lady Nechama Rivlin, demonstrating alongside workers from the President’s Residence in the capital. 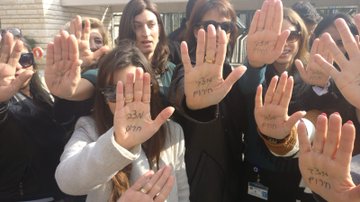 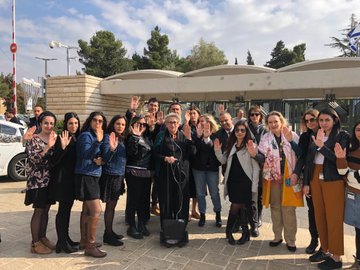 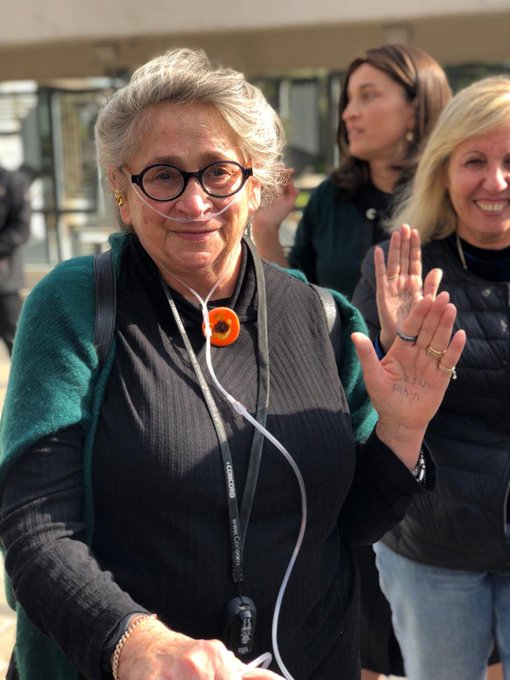 Women (and men) who work (and live) at Beit HaNasi, including Nechama Rivlin, are striking this morning in solidarity with victims of domestic violence #מצבחירום

Demonstrators also gathered at the Beit Lid intersection in the center of the country, but did not disrupt traffic.

In the north of the country, around 150 protesters held a rally in Haifa’s Memorial Park, dozens demonstrated at the entrance to the town of Kiryat Shmona, and a crowd gathered in the city of Safed.

Demonstrators rallied in nearly every major town and city in the country, with protests in Beersheba, Acre, Lod, Tira, Ashdod, Bat Yam, Beit Shemesh, Rehovot, Netanya and Beit Jann, among others.

Women also gathered close to the northern town of Metulla, near the border with Lebanon where the IDF on Tuesday began an operation to destroy Hezbollah attack tunnels, with signs saying that the violence against women was a “red line.” 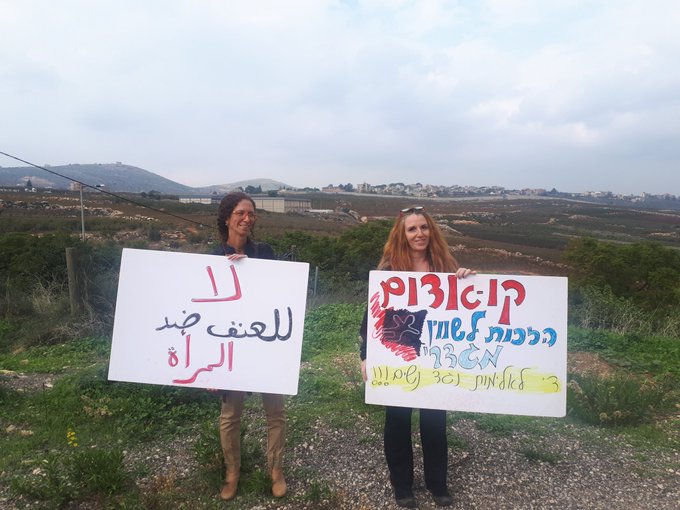 In the south of the country, women gathered with signs at the entrance to Kibbutz Ketura in the Arava Valley.

The day’s events are slated to culminate in a main demonstration in Tel Aviv’s Rabin Square at 7:30 p.m. that is expected to draw thousands.

Kicking off the protests Tuesday morning, on Tuesday morning, over 200 pairs of women’s shoes, painted red, were laid out to protest the violence in an installation at Tel Aviv’s central Ha’Bima Square. A day earlier, activists poured red dye in public fountains in several cities to draw attention to the protest.

Throughout Tuesday, music and art exhibits will be displayed along Rothschild Boulevard in Tel Aviv, and a march in solidarity with the asylum-seeker community will depart Levinsky Park for Rabin Square in the afternoon. 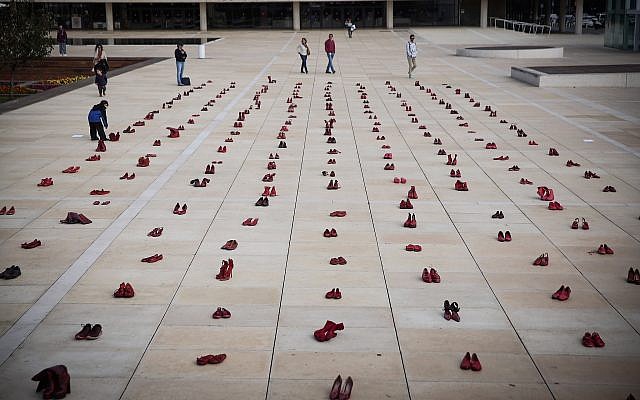 Red-painted shoes on the floor of Habima Square as part of a protest against violence against women, in Tel Aviv, on December 4, 2018 (Miriam Alster/Flash90)

The protests capped a week of smaller demonstrations, after two teen girls were found killed on November 26.

Yara Ayoub, 16, was found dead in her Galilee hometown of Jish, six days after she went missing, according to police. Authorities have identified the primary suspect in the murder as a 28-year-old man from the village, and have arrested several others suspected of involvement.

According to reports, Tsegai had been known to welfare authorities as a victim of domestic violence. She reportedly called police on Saturday to complain about Tesfasion being in her home. 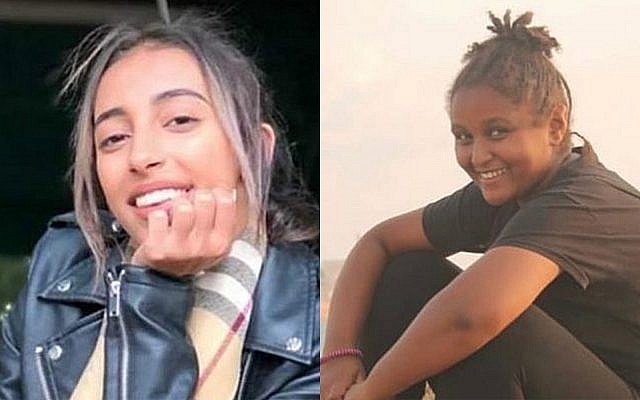 Yara Ayoub, 16, from the Galilee village of Jish, left, and Sylvana Tsegai, 13, who was found dead Tel Aviv. Both were found murdered on November 26, 2018. (Hadashot screen capture, courtesy)

During the discussion, a number of activists in the stands overlooking the plenum pulled out signs and loudly protested the government inaction. Knesset speaker Yuli Edelstein ordered the woman removed from the plenum.

According to organizers, over 300 institutions have expressed support for the strike, including 47 local municipalities, 11 labor unions and around 100 corporations and private businesses. 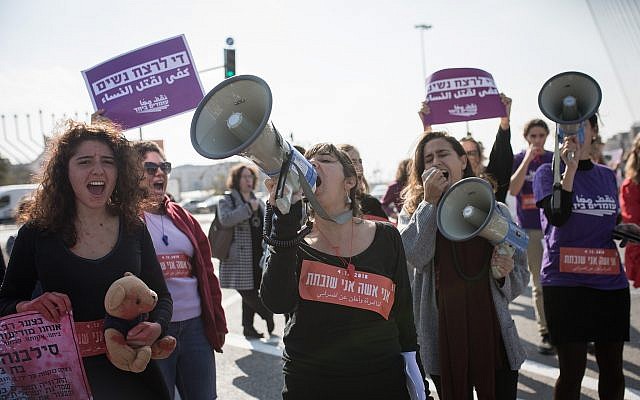 In recent days, the Knesset, the Histadrut national labor union, the national student union, the Jewish National Fund and the National Insurance Institute have joined hundreds of others backing the strike, which was called last week following the murders of the two teen girls.

“We are striking because decision-makers must realize that actions are required, not empty words,” the organizers said in a statement on Monday that called on Israelis to take to the streets the next day “to stand up to negligent indifferent and demand solutions.”

“We demand the transfer of the NIS 250 million budget promised a year and a half ago, for the emergency plan to prevent violence against women,” organizers said, and called for additional educational and rehabilitation programs to combat domestic violence. 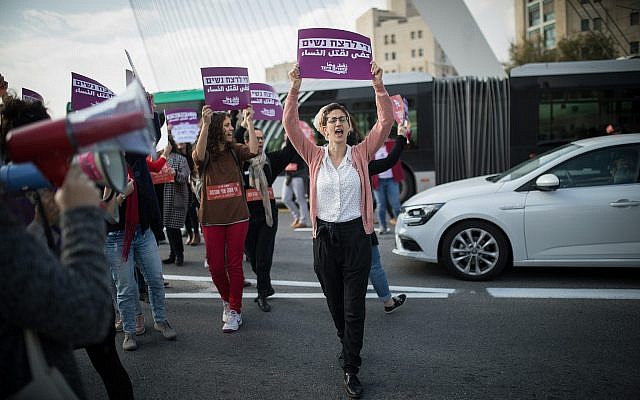 Women block the entrance to Jerusalem as they protest against violence against women, on December 4, 2018 (Hadas Parush/Flash90)

On Monday, Civil Service Commissioner Daniel Hershkowitz said that anyone who wanted to participate in the labor action could do so without being penalized by their employer.

As per Hershkowitz’s instructions, employees must be allowed to strike on Tuesday but their employers had the right to dock the time from accumulated vacation days. He also instructed government ministries to hold workshops and other activities to raise awareness for domestic violence on Tuesday.

On Saturday, the Tel Aviv Municipality said its female employees would be allowed to take paid leave Tuesday if they wished to observe the strike. A short time later, the municipalities of Jerusalem, Haifa, Beersheba, Ramat Gan, Modiin, and Rishon Lezion made similar announcements. 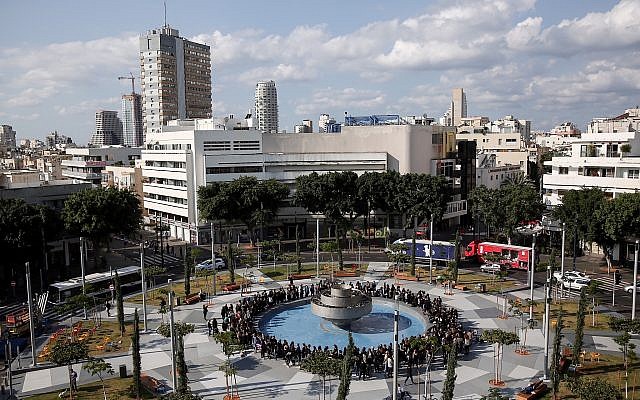 The Arab majority towns of Tamra, Tira, Sakhnin, Taibe, Kafr Kassem, Jaljulia and Qalansawe have also said they will participate, among others.

According to organizers, the Rami Levy and Tiv Ta’am supermarket chains, the Fattal hotel chain, the Haaretz publishing group, the Yes TV satellite company, eBay Israel, the Dizengoff Center mall, and the Super-Pharm drugstore chain have also backed the strike. 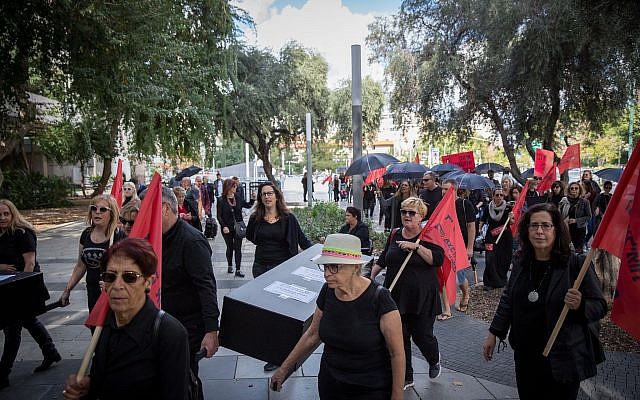 At a visit to a women’s shelter on November 25, Prime Minister Benjamin Netanyahu and his wife, Sara, said they were “unsettled” by domestic violence. 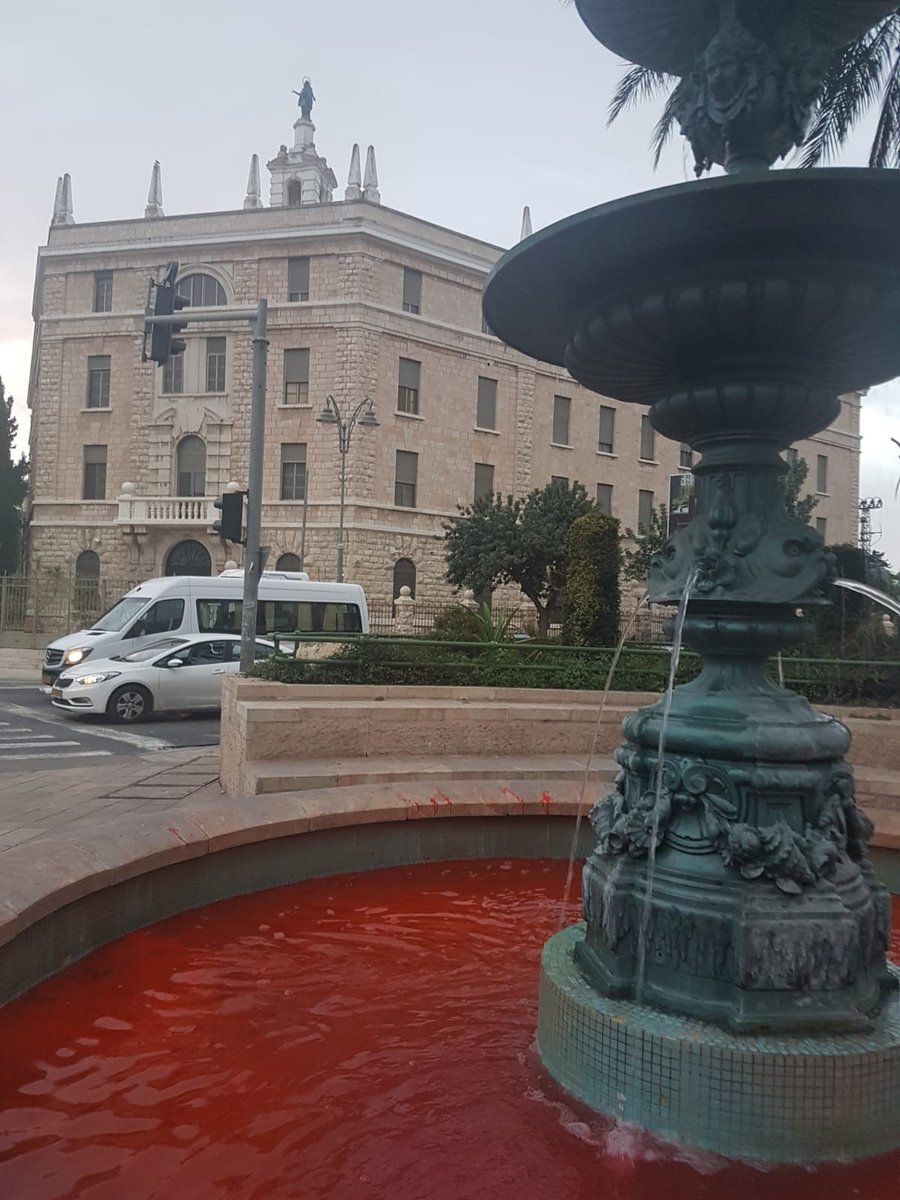 Red dye in the water of a fountain at Paris Square in Jerusalem, December 3, 2018. (Gender Counter-Terrorism Unit)

Netanyahu later told ministers he was surprised to learn that “almost nothing” was done to domestic abusers. Netanyahu said the uptick in violence against women in Israel in recent years was “a criminal phenomenon” and called for stricter enforcement.

Netanyahu said he had voted against the Knesset proposal to establish a parliamentary commission of inquiry on violence against women because it was presented by opposition lawmakers.

The opposition floated the proposal for a commission of inquiry into violence against women after the government failed to deliver a plan to address the problem, as it had promised to do several weeks ago.