The army on Thursday morning announced that the Military Police was launching a criminal investigation into the death of a disabled Palestinian man during a riot along the Gaza security fence on December 15, after an earlier IDF probe failed to determine how he had died.

Since Ibrahim Abu Thurayeh’s death, Palestinian officials have been insisting that the man, a wheelchair-bound double amputee, was killed by Israeli sniper fire during a protest against US President Donald Trump’s recognition of Jerusalem as Israel’s capital.

The death of Abu Thurayeh sparked angry denunciations by Palestinians and others, who said he could not have presented a serious threat during the protest. His image emerged as an international symbol of resistance to Trump’s December 6 Jerusalem declaration, which the Palestinians see as siding with Israel.

The Israel Defense Forces’ Southern Command launched an investigation into the allegation that Abu Thurayeh was killed by Israeli sniper fire, and found that no live round had been explicitly aimed at him, but failed to determine the exact cause of death.

“No live fire was aimed at Abu Thurayeh. It is impossible to determine whether Abu Thurayeh was injured as a result of riot dispersal means or what caused his death,” the army said at the end of the investigation on December 18. 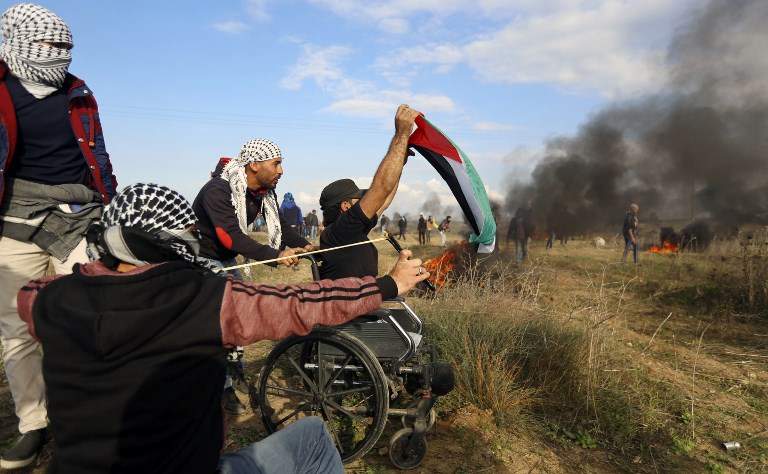 The military said it was hindered in its investigation by the fact that Palestinian authorities did not share the details of Abu Thurayeh’s injuries from the demonstration.

“Despite numerous IDF requests for information, no precise details or conclusions regarding Abu Toriya’s (sic) injuries were received. If additional details will be received, they will be examined and studied,” an army spokesperson said at the time.

Despite failing to identify Abu Thurayeh’s cause of death, the army asserted that its investigation had uncovered “no moral or professional failures.”

On Thursday morning, the IDF said it was handing the case to the Military Police for renewed scrutiny after obtaining previously unavailable information about the incident from groups inside Gaza.

“In order to further examine the case, including information received from organizations operating in the Gaza Strip, it was decided that the circumstances of Abu Thuraye’s death will also be examined by a Military Police investigation,” the army said.

On December 28, the Associated Press reported it had received Palestinian medical records showing that Abu Thurayeh was killed by a bullet that struck him in the head.

The medical records, which include a hospital report and a death certificate, said that Abu Thurayeh, 29, was struck by a bullet above his left eye and died from bleeding in the brain. The same findings were detailed in a report by the Palestinian Red Crescent ambulance service reviewed by the AP. 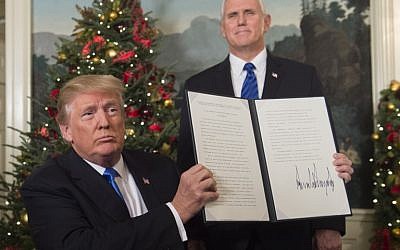 US President Donald Trump holds up a signed memorandum after he delivered a statement on Jerusalem from the Diplomatic Reception Room of the White House in Washington, DC on December 6, 2017 as US Vice President Mike Pence looks on. (Saul Loeb/AFP)

The reports did not specify who fired the bullet or what caliber it was.

The AP showed the report from Gaza’s Shifa hospital and the death certificate to the army. In a statement, the military noted the report had come from the media and said it “will be studied and examined during the following days.”

The military has maintained that the demonstration on December 15 “was extremely violent and included thousands of rioters,” who threw rocks and rolled burning tires at the security fence itself and the soldiers on the other side of it.

The army said that troops mostly used crowd dispersal weapons — tear gas and rubber bullets — against the protesters, but that in some cases live fire was used. Though such riot dispersal munitions are less lethal than standard rounds, there have been numerous cases of people being killed by rubber bullets and tear gas canisters, as well as from complications connected to inhaling tear gas.

“Few controlled shootings were carried out toward main instigators. Troops received approval prior to shooting each round by a senior commander in the field,” the army said at the time.

While the clash turned violent, with protesters hurling stones, firebombs and burning tires at the border fence, witnesses have said there was no gunfire from the Palestinian side.

The protest came amid a wave of violence that erupted in the Palestinian territories after Trump’s Jerusalem declaration, and in which 12 people died, almost all of them in Gaza. Hamas, the terror group that controls the coastal enclave, urged Palestinians to confront soldiers and settlers, and allowed thousands of Gazans to clash with Israeli troops at the border fence. Its leader, Ismail Haniyeh, praised the “blessed intifada,” urged the liberation of Jerusalem, and made plain the group was seeking to intensify the violence against Israel. 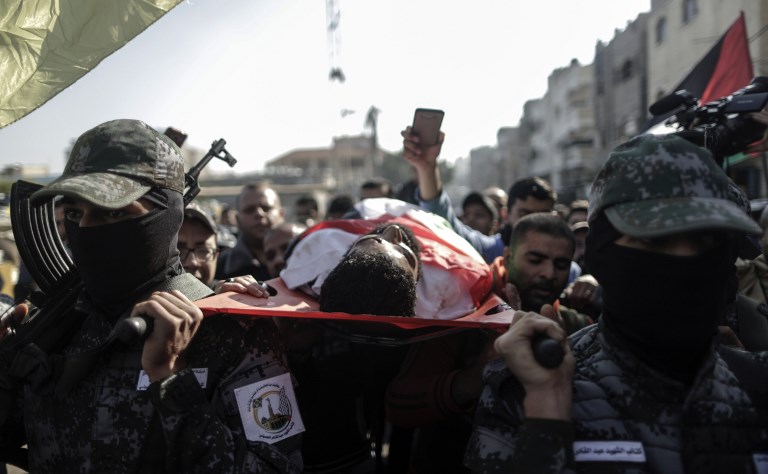 Palestinians carry the body of 29-year-old Ibrahim Abu Thurayeh during his funeral in Gaza City, on December 16, 2017, after he was killed during clashes between Israeli soldiers and Palestinian protesters along the Gaza security fence the day before. (Mahmud Hams/AFP)

Abu Thurayeh’s story drew international news coverage, and thousands attended his funeral in Gaza. Addressing the funeral, Hamas chief Ismail Haniyeh praised him as a hero and a martyr, and vowed never to relinquish Jerusalem. “And I don’t mean East Jerusalem, but unified Jerusalem,” Haniyeh said, in footage screened by Israel’s Channel 10. “Not East Jerusalem and not West Jerusalem. Muslim. Muslim.”

Last month, UN High Commissioner for Human Rights Zeid Ra’ad Al Hussein decried Abu Thurayeh’s death as “incomprehensible — a truly shocking and wanton act.” Despite the Israeli army’s own internal probe into the events at the time, Zeid urged “an independent and impartial investigation” to ensure perpetrators were held accountable.

Abu Thurayeh was a regular presence at protests at the border.

While relatives have claimed he lost his legs in an Israeli airstrike while trying to rescue people, AP records showed that he was wounded on April 11, 2008, in a clash between Israeli forces and Palestinian operatives in the Bureij refugee camp in central Gaza. AP television footage from that day shows Abu Thurayeh identifying himself as he is taken away on the back of a pickup truck.

Both gunmen and civilians were wounded and killed that day, and it is not clear whether Abu Thurayeh had participated in the violence. Since losing his legs, he often rolled around Gaza City, earning a living by washing cars. He also was a frequent participant in protests along the border. 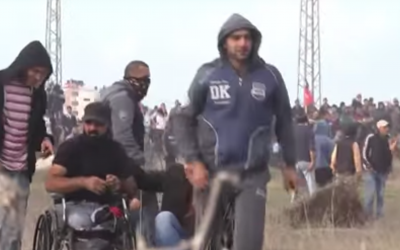 According to the IDF, some 3,500 Palestinians protested along the Gaza security fence on December 15 over Trump’s controversial decision to recognize Jerusalem as Israel’s capital and ultimately move the American embassy to the holy city.

Palestinians consider East Jerusalem, captured by Israel from Jordan — which had been occupying it since 1948 — in the 1967 Six Day War, as the capital of their future state. Trump said his declaration did not prejudge a final status agreement as part of a future peace deal, but Palestinians were infuriated by the decision.

The Guardian quoted eyewitnesses who said Abu Thurayeh’s wheelchair had been pushed up to the fence, whereupon he climbed out of it and tried to crawl forward toward it, before being hit.

In video footage recorded at the protest, Abu Thurayeh could be seen carrying the Palestinian flag and waving the victory sign at Israeli soldiers across the border.

“I want to go there,” he said, referring to the other side of the border, as a number of young men surrounding him waved Palestinian flags and others threw stones toward the troops.

“This land is our land,” he said, in another video posted on social media. “We will not give up. America has to withdraw its decision.”