In The Sand Around Gaza, Israel and Hamas Dig In A Literal Race To The Bottom

KISSUFIM – Five meters (16 feet) below the ground, about 200 meters (650 feet) inside Israeli territory, lies the entrance to a cramped tunnel whose destruction in October upped the tension around the Gaza Strip, sparking mortar and rocket attacks as well as frequent riots along the security fence surrounding the coastal enclave.

On Thursday, the military allowed journalists to visit the tunnel, which was dug by the Palestinian Islamic Jihad terrorist group, as well as two construction sites where workers were drilling deep underground to create the reinforced, sensor-laden concrete walls of a massive underground barrier that is meant to surround the Gaza Strip and put an end to the subterranean terror threat once and for all.

In the coming weeks and months, as construction progresses, the military expects to find and destroy several more attack tunnels that enter Israeli territory from Gaza. The subterranean wall it is building will deny Hamas, the Palestinian Islamic Jihad and other Gaza-based terrorist groups what is arguably the only strategic weapon they currently possess, a fact that he said is slowly dawning on them.

“It’s just a matter of them becoming aware of it,” the official said.

The Palestinian Islamic Jihad attack tunnel began in the Gaza city of Khan Younis, a little over one kilometer (0.6 miles) away from the border with Israel. According to the IDF official, it was dug at a rate of 10 to 20 meters (33 to 66 feet) per day by workers who operated in shifts and had a maximum depth of 28 meters (91 feet). 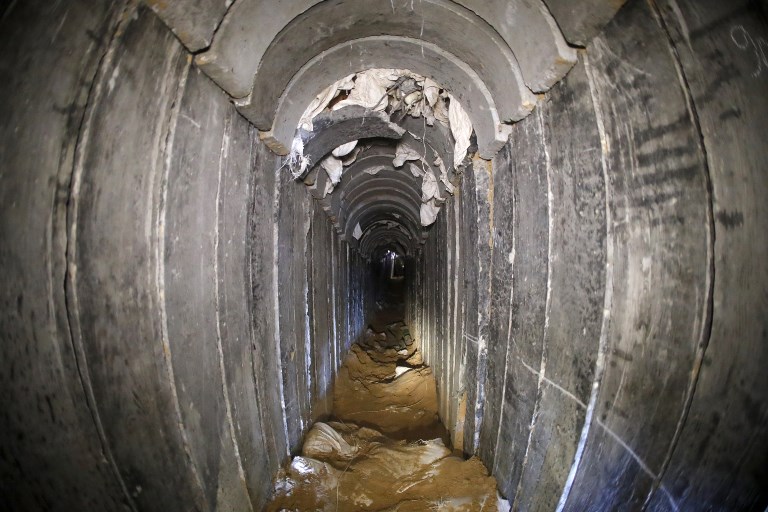 A destroyed Palestinian Islamic Jihad tunnel, leading from Gaza into Israel, near the southern Israeli kibbutz of Kissufim. (Jack Guez/AFP/POOL)

The tunnel itself wasn’t much to behold. The floor was littered with empty soda bottles and plastic sacks that once held dirt. Jagged pieces of rebar jutted out of the walls. The top of this six-foot-tall reporter’s head brushed against the ceiling. But to the residents of nearby Kibbutz Kissufim, some two kilometers (1.2 miles) away, it could have spelled disaster.

According to one nightmare scenario, dozens of terrorists could emerge from an attack tunnel and sneak into an Israeli community near the border, slaughtering residents or taking them hostage. In practice, tunnels have so far been used to launch sneak attacks on Israeli soldiers, including kidnappings.

On October 30, the Israel Defense Forces blew up the underground passage, immediately killing five members of the Palestinian Islamic Jihad group who were digging it at the time. Nine other terrorists who were part of a botched rescue attempt, including two senior commanders and two Hamas operatives, also died.

The Iran-backed Islamic Jihad vowed revenge and indeed launched several attacks in the following months, joined by other small, radical terror organizations in the Strip.

Prior to that wave of attacks, 2017 was on track to be one of the quietest years in terms of attacks from the Gaza Strip, with several months passing without incident. Instead, in the span of a few weeks, Israel saw nearly as many rockets and mortars striking Israel as in the previous two years combined.

In early December, the IDF uncovered and destroyed another tunnel that entered Israeli territory from Khan Younis, this one dug by Hamas. Last Saturday night, the army demolished a third, which passed into Israel from the Gazan city of Rafah, underneath the Kerem Shalom Crossing, through which nearly all humanitarian aid enters the beleaguered enclave.

Though it’s been approximately two weeks since the last Gazan mortar shell hit Israel — others have been fired in the interim but fell short — the army believes there is still potential for renewed conflict.

Though the senior IDF official said that neither Israel nor Hamas is currently interested in conflict, he warned that one rocket could spark renewed violence at any time.

This could also be seen in the nearly 50 percent decrease in the number of trucks bringing commercial goods and aid into the coastal enclave in the past six months, which the officer said was not because of Israeli limitations, but because Hamas has been focusing its funds on arms buildup.

“A lack of money is not the problem in Gaza,” the official said.

A barrier ‘at any price’

Meanwhile, work continues apace on the 65-kilometer (40-mile) underground barrier, which is referred to in Israel as “the obstacle.” 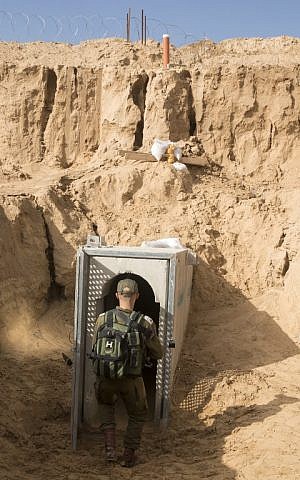 An Israeli army officer walks into a destroyed Palestinian Islamic Jihad tunnel, leading from Gaza into Israel, near the southern Israeli kibbutz of Kissufim. (Jack Guez/AFP/POOL)

One of the main concerns for the IDF is that Hamas or Islamic Jihad will attempt to use one of their remaining tunnels to carry out an attack inside Israel before it’s discovered. Nevertheless, military officials have repeatedly said they will not be deterred from completing the barrier.

“Israel will defend this barrier in every way possible,” and IDF official said in August. “This barrier will be built. Period. At any price.”

So far, approximately four kilometers (2.5 miles) of the barrier have been built around the most at-risk Israeli communities since work began on it in earnest last summer. In addition to the actual digging of the barrier, the military also had to build five cement factories in the area and make other preparations.

The underground wall is due to be finished sometime before the end of 2019, if work continues at its current pace, the senior IDF official said.

Without access to tunnels, those Gazan terrorist groups will have to turn to other methods of threatening Israel, likely drones, sea-based attacks or more advanced types of missiles, he said.

The Israeli military has warned that Hamas is trying to make progress on all three of those fronts.

But while the army prepares for these new threats, the IDF’s Gaza Division is working 24 hours a day, six days a week — although most of the workers aren’t Jews, construction stops on the Shabbat — to complete the underground barrier and end the tunnel threat, the senior IDF official said.

How to build a huge underground wall

The military proposed building the barrier following the 2014 Gaza war, known in Israel as Operation Protective Edge. During the fighting, Hamas made extensive use of its tunnel networks to send fighters into Israel as well as to move its terrorist operatives and munitions within the Gaza Strip.

Though the army has previously revealed the building methods for the underground barrier — using a common technique known as “slurry walls” — Thursday marked one of the first occasions when the army allowed journalists an up-close view of the construction sites, though photography was forbidden.

The hundreds of people working on the project come from all over the world, from Brazil to India, the IDF official said. 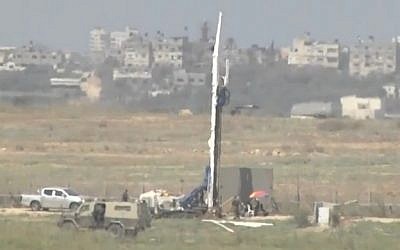 Israeli construction teams work on a concrete border wall to run above and below ground along the Gaza border, September 2016. (Screen capture: Ynet)

Out of concern that Hamas or other terror groups may try to interrupt construction, the workers are all meant to wear helmets and protective vests, but on Thursday many were not wearing the vests and almost all were helmet-less.

Using a machine called a hydromill, they dig a deep trench into the ground and fill it with a liquid mixture of bentonite clay and water, which prevents the hole from collapsing. They then drop in a metal lattice, which provides support and strength to the wall. Finally, they lower a pipe to the bottom of the trench and fill in the space with concrete, which pushes out the bentonite mixture.

Once one trench is completed, the team moves on to the next one and the next one, for 65 kilometers.

The process is also supposed to automatically uncover any tunnels that cross into Israel, as the liquid bentonite mixture would drain into them.

The army would not specify the depth of the underground barrier. The IDF official would only say, with a smirk, that it was “deep enough.”

The barrier is being constructed entirely inside Israeli territory, 50 meters from the Gaza border at its closest point and 300 meters away at its farthest.

All told, the fortification of the Gaza border is expected to cost some NIS 3 billion ($877 million), with NIS 2.4 billion ($700 million) of that going toward the subterranean wall.

In addition to the underground barrier, the army is also constructing a new metal fence, some eight meters (26 feet) tall, as well as adding additional breakwaters on the coast around Gaza and other protective measures in order to prevent infiltration into Israel from the sea, as occurred during the 2014 Gaza war.