Prime Minister Benjamin Netanyahu celebrated the American recognition of Jerusalem as Israel’s capital as he welcomed US Vice President Mike Pence to the city on Monday.

Netanyahu told Pence he had never before been able to join a foreign leader in calling the city the capital.

“This is the first time that I’m standing when both leaders can say those three words, ‘Israel’s capital, Jerusalem.’” Netanyahu said according to a statement from his office.

The trip by Pence is the first by a major figure from the US since President Donald Trump recognized Jerusalem as Israel’s capital in a December 6 address. While Israel has feted Pence for the move, the Palestinians have reacted furiously and are refusing to meet with the vice president, who arrived in the city Sunday night.

“I want to thank President [Donald] Trump and you for that historic statement, which I know you supported and championed,” Netanyahu added. “I look forward to discussing with you, as we’ve just begun, how to further strengthen our remarkable alliance—it’s never been stronger—and how to advance peace and security in our region, which is our common aim.”

He called Pence his “dear friend.”

Pence was welcomed to Jerusalem Monday morning like a head of state as he kicked off a two-day visit to the Jewish state.

Later on Monday, Pence is scheduled to address the Knesset in what is being billed as a “historic” speech. 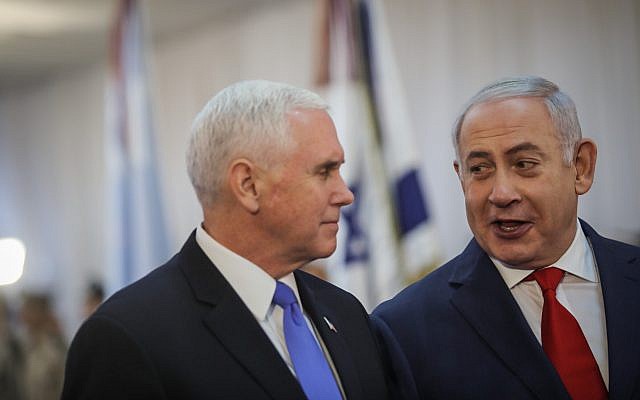 Pence and his wife Karen arrived at Ben-Gurion airport Sunday evening as part of a wider tour of Middle Eastern countries which comes amid simmering Palestinian anger at Trump’s recognition of Jerusalem as the capital of Israel. In Jordan, King Abdullah pressed Pence on backing the two-state solution and chided the administration for its recognition of Jerusalem, which broke years of US policy.

Pence said he and Abdullah had “agreed to disagree.”

Netanyahu welcomed Pence to Israel in a Facebook post Sunday, and later at an event for foreign diplomats, hailing the vice president as a “great friend of Israel.”

In comments Sunday night, Netanyahu stressed that “there is no alternative” to the United States as a peacebroker, and that anyone who rejects the US as a peacebroker “does not want peace.” This was a reference to the Palestinian Authority’s declared refusal to have any dealings with the Trump administration’s peace team since the president’s Jerusalem declaration on December 6.

“I have a message for [PA President Mahmoud] Abbas: There is no alternative to American leadership in the diplomatic process. Whoever is not ready to talk with the Americans on peace does not want peace,” he said. 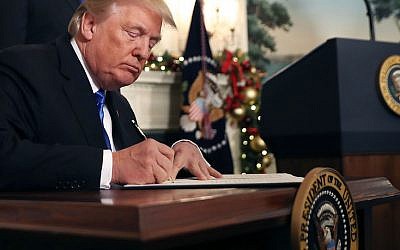 US President Donald Trump signing a proclamation that the US government will formally recognize Jerusalem as the capital of Israel, at the White House in Washington, DC, December 6, 2017. (Chip Somodevilla/Getty Images via JTA)

Welcomed by Netanyahu and Israeli leaders across most of the political spectrum, Trump’s recognition of Jerusalem infuriated the Palestinians, who seek the Israeli-annexed eastern sectors of the city as a future capital. They accused the US of siding with Israel, and Abbas said the move disqualified Washington from acting as a mediator in the Israeli-Palestinian peace process.

After Trump’s announcement on Jerusalem, Abbas said he would not meet with administration officials and called off a meeting with Pence that had been scheduled for mid-December.

In a new expression of that snub, Abbas overlapped but didn’t meet with Pence in Jordan from Saturday evening until midday Sunday, when the Palestinian leader flew to Brussels for a meeting with European Union foreign ministers Monday. There, Abbas is expected to urge EU member states to recognize a state of Palestine in the pre-1967 lines, and to step up their involvement in mediation.

In protest of Pence’s arrival in Israel, several Palestinian protesters burned a photo of the vice president Sunday night at a small demonstration in the West Bank city of Bethlehem. Pence’s trip had been scheduled to include a visit to Bethlehem, but the Palestinian Authority is boycotting his visit, so the West Bank itinerary was canceled. The trip had originally been scheduled for mid-December, but was delayed by a tax vote in the Senate that Pence needed to be in Washington for. 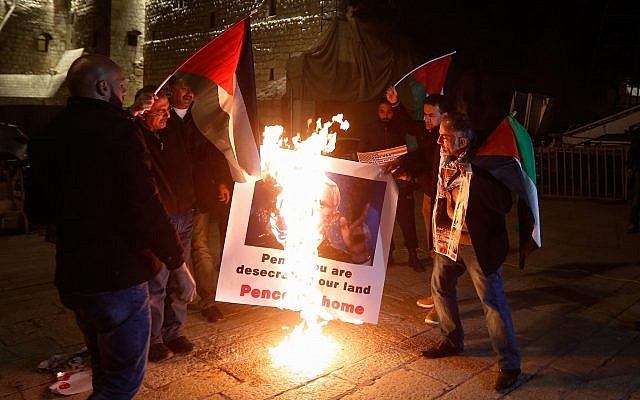 Palestinians protest against the visit of US Vice President Mike Pence outside the church of nativity in the West Bank city of Bethlehem on January 21, 2018. (Wisam Hashlamoun/Flash90)

Following the meeting with Netanyahu, Pence will make his way to the Knesset where he will address a special plenary session. Knesset Speaker Yuli Edelstein, Netanyahu and opposition leader Isaac Herzog will also deliver speeches. President Reuven Rivlin, Supreme Court President Esther Hayut and many other dignitaries are expected to be in attendance.

As part of the preparation for the speech, which is set for 2 p.m., the Knesset has installed teleprompters for Pence, only the third time the devices will be used. US president Bill Clinton used one in a 1994 address and Ukrainian President Petro Poroshenko also had one in 2015.

In a statement released ahead of the speech, Edelstein said Pence’s visit “is nothing less than a historic occasion and comes at a hugely significant time for Israel and the Middle East.” 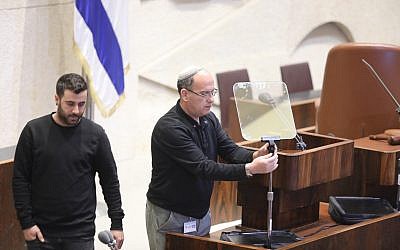 “We will listen intently to his speech and we in the Knesset will do everything we can in order to host Vice President Pence in the most fitting and impressive way possible,” Edelstein added, in likely reference to efforts he has made to stop MKs from interrupting the speech, as has been the case during several previous visits of foreign officials.

MK Ayman Odeh said last week that his Joint (Arab) List party plans to boycott Pence’s speech to the Knesset due to Trump’s recognition of Jerusalem as Israel’s capital.

In a Twitter post Saturday, Odeh said his party would go through with an earlier promise to skip Pence’s address.

“[Pence] is a dangerous man with a messianic vision that includes the destruction of the entire region,” he also said.

Odeh also attacked Trump, saying he was “even more dangerous” than Pence and a “political pyromaniac” and a “racist” woman-hater. He slammed the US president’s Israeli-Palestinian peacemaking efforts and said Trump “must not have a [political] road map for the region.”

Later on Monday, the Pences will dine with the Netanyahus at the Prime Minister’s Residence on Jerusalem’s Balfour Street.

On Tuesday morning, the vice president will meet Rivlin at the President’s Residence and then head to Yad Vashem, where he will lay a wreath in the Hall of Remembrance.

From there, the US delegation will go straight to the Western Wall, which is located in a part of Jerusalem’s Old City most of the international community considers occupied Palestinian territory. 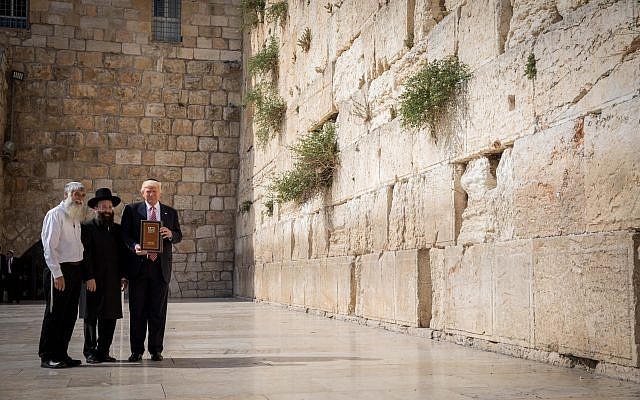 US President Donald Trump (r) with Rabbi of the Western Wall Shmuel Rabinowitz (c) at the Western Wall, in the Old City of Jerusalem on May 22, 2017. (Nati Shohat/Flash90)

As opposed to other stops on his itinerary, Pence will not be accompanied at the holy site by an Israeli official. Rather, he and his wife, Karen, will be greeted by Western Wall Rabbi Shmuel Rabinovitch. It is still unclear whether the vice president will deliver a statement there.

Afterward, Pence will hold a reception for US diplomats based in Israel at the Jerusalem consulate, before heading back to Washington.

Share
Facebook
Twitter
WhatsApp
Telegram
Email
Previous articleKevin Nicholson: Democrats Like Tammy Baldwin Put Illegal Immigrants Before the Interests of Those in Uniform
Next articleSharpton: We Must ‘Question the Integrity’ of Evangelical Leaders Who Support Trump